On September the 12th 1970, Timothy Leary escaped from San Luis Obispo minimum security prison, in one of the most colourful and scarcely believable episodes in his remarkable biography. In January of that year, he had been sentenced to twenty years in prison for two relatively minor drug charges. Given a psych test in order to assign a suitable location and occupation while incarcerated, Leary answered the questions in such a way as to suggest that he was a low-risk, docile conformist who loved forestry and gardening. Leary could manipulate the test so easily because he had played a crucial role in designing it himself some years earlier. This fact in itself is telling of the extraordinary trajectory of Leary’s life in the sixties – how he had transformed himself in a few short, helter-skelter years from a respected Harvard lecturer to a charismatic Pied Piper of the counter-culture whom Richard Nixon called “the most dangerous man in America.” 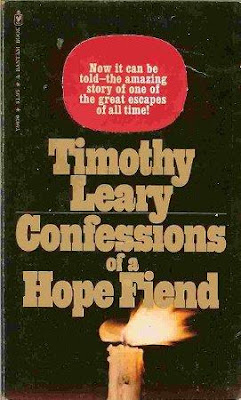 It was via that skilful manipulation of his psychological profile that Leary found himself in the gardens of the California Men’s Colony West at San Luis Obispo. On the night of the 12th, the then fifty year old former Harvard lecturer climbed a tree in the exercise yard, jumped from there to the roof of the cellblock, and from the roof clambered across a telephone wire to freedom, while an unwitting patrol car passed underneath. A few days later, Leary (disguised under a bald wig) and his wife Rosemary Woodruff were flying to Algiers with false passports. Their escape out of the country had been masterminded by the Weather Underground, and funded by a group of LSD distributers and connoisseurs from Orange County who called themselves the Brotherhood of Eternal Love. You couldn’t make it up.
In Algiers, Leary sought the patronage of another revolutionary and fugitive from the US penal system. The writer, activist, and Black Panther leader Eldridge Cleaver had fled a charge of attempted murder to Cuba, and from there established a small Black Panther “government in exile” in Algiers. However, Tim and Rosemary’s time with the Panthers was tempestuous; Cleaver regarded Leary’s espousal of drug use as inimical to the revolutionary struggle, and eventually placed the Leary’s under “revolutionary arrest”. This ideological disagreement between Leary and Cleaver is captured in this fascinating short piece of film from that period:
From Algiers, the Leary’s next port of call was Switzerland, the birthplace of LSD. Here they were initially supported, and eventually incarcerated once again, by an extravagant arms dealer called Michel Hauchard. Hauchard rather nobly claimed that it was his “obligation as a gentleman to protect philosophers”, but it is suspected that his real motivation lay in the possibility of a lucrative film deal. Eventually, however, Leary did find a certain brief oasis of stability in Switzerland; a stability relative, of course, to the general hedonistic chaos that he had eagerly courted since turning his back on the Establishment in the sixties. Rosemary, perhaps unsurprisingly, divorced him, but he had sold a book, Confessions of a Hope Fiend, to Bantam and brought a yellow Porsche with the proceeds. According to a 1972 Oz interview, Leary found himself initiated into the upper echelons of decadent and enlightened Swiss society: “In Europe we have been contacted by several elitist, aristocratic, thoughtfully decadent drug taking groups of older people, who follow traditions which trace back through French poets, German mystics, elegant hashishines, silk-satin opium adepts. It’s a deep, wise old continent, and quite together at the moment.” Leary was also contacted at this time by a representative of a burgeoning and culturally prescient musical scene that had emerged in Europe: the Kosmische (Cosmic) Musik scene in Germany. 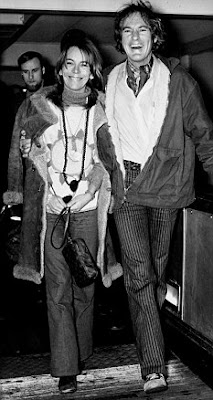 While popular British and American rock music of the seventies was laying the foundations for heavy metal and the eventual self-parodic heat-death of 80s poodle rock, something altogether more futuristic and strange was happening in Germany. Beyond their respective cult followings at home, and a small but feverish underground audience in Britain, the significance of the various bands that would come to be labelled “krautrock” was little understood or appreciated at the time. In the twenty first century, 70s German experimental rock would be lionised and even fetishized to an extreme degree by musical connoisseurs with an increasingly vast and atomised store to draw from. As such, it was apt that Leary, who always seemed peculiarly ahead of the curve, should have wandered briefly into the orbit of this musical future in the making, more or less by accident. Ash Ra Tempel were working on their third record in 1972, and wanted very much to collaborate with Alan Ginsberg; however Ginsberg was nowhere to be found. When they discovered that Timothy Leary was in Europe, they decided that he would make a perfect Ginsberg-substitute. Leary, meanwhile, suffering from writer’s block, had enlisted the creative assistance of counter-culture writer and psychedelic adventurer Brian Barritt: 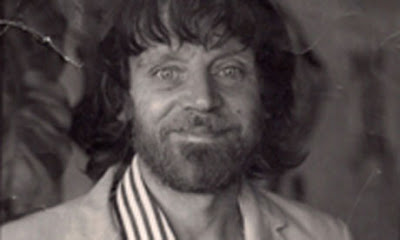 Leary and Barritt were a marriage made in some kind of heaven. Prior to working with Ash Ra Tempel, they had channelled the spectres of Alesister Crowley’s notorious Enochian encounter in the Algerian desert, dabbled in heroin, allegedly established an occasional telepathic rapport, and developed a complex theoretical taxonomy of human consciousness which came to be known as the eight circuit model of consciousness. The eight circuit model is a little too involved to get into here, but it should suffice to say that the eight circuits are latent or potential mental states or modalities contained in human consciousness. The initial four, or larval circuits, are concerned with basic survival instincts and desires for egotistical satisfaction; the larval circuits are rooted in terrestrial evolution. The concluding four, or stellar circuits, are concerned with mystical, higher, integrative states of awareness and psychedelic experience; they are perhaps evolved specifically for future generations that will successfully migrate off-world to explore cosmic space. Barritt and Leary suggested to Ash Ra Tempel that they make the proposed album a kind of aural modelling of the ascent upwards through the eight circuit model of consciousness. The result was Seven Up, a record named after a bottle of the innocuous beverage that Leary’s son in law had passed around to the band, without informing them that it was spiked with potent crystal acid. The making of the record looks like it was the kind of gas that most mere mortals could barely withstand: 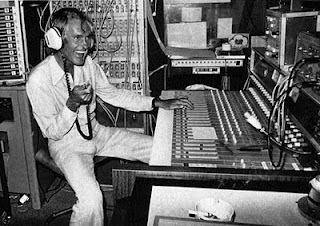 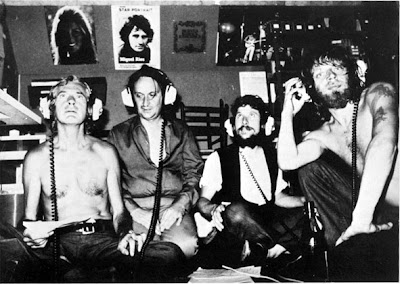 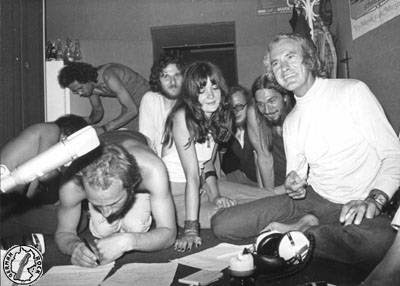 You can listen to the whole record below. The opening sections, composed of ragged blues work-outs fading in and out of spacy washes of synth, don’t immediately inspire confidence, but it’s worth toughing it out. The concluding ten minutes are a gorgeous catapult into the higher reaches of the lysergic empyrean. Shortly before his death, Leary commented to Brian Barritt regarding their involvement in kosmiche music, “Well, Brian, we landed in the right place at the right time….”, a sentiment that could easily have served as an epitaph for the whole of his incorrigible adventure in the culture of the twentieth century.

I've been off the grid, so to speak, due to some untimely health issues that have now stabilized. The point of that is only to establish that I have just discovered the new format you have embraced and wanted to voice my approval even though I'm late to the party.

Hey Michael. You're always welcome to stroll into this party (such as it is) whenever you feel like it! Good to hear from you - hope all is well health-wise, and with stuff in general.