The Blues Accordin' to Lightnin' Hopkins. 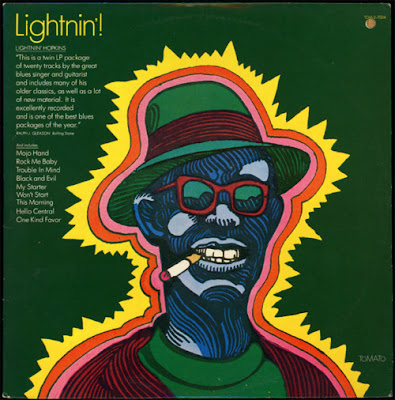 Even if you don't particularly dig the blues, I'd strongly recommend putting an eye on this wonderful little film. It's shot by Les Blank, a documentary filmmaker noted for his portraits of various traditional American musicians, as well as for work in collaboration with the great German director and 21st century folk legend Werner Herzog. ( Blank has made a short documentary called Werner Herzog Eats his Shoe (1980) in which the great man does indeed cook and eat his shoe!) In The Blues Accordin'..., Blank's access to his subject is intimate and candid, the music by Hopkins, Billy Bizor, Ruth "Blues"Ames, and a variety of other musicians, is fantastic, and the footage of the Hopkins' Texan hometown Centerville in the 60s is very striking and beautifully assembled:

Album image from TreMarzo
Posted by Tristan Eldritch at 5:24 PM