Do Androids Dream of Electric Gliders?

Posted by Tristan Eldritch at 12:23 PM No comments:

I'm a big fan of the occulture-themed artwork of Fredrik Söderberg: 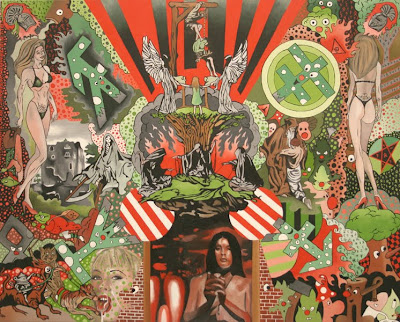 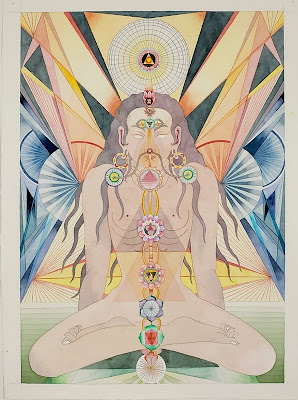 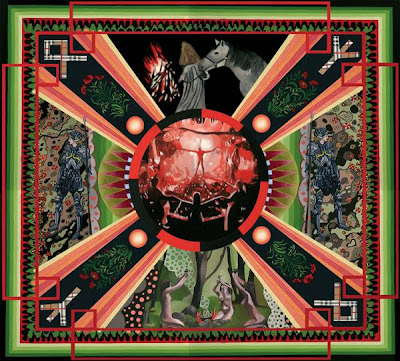 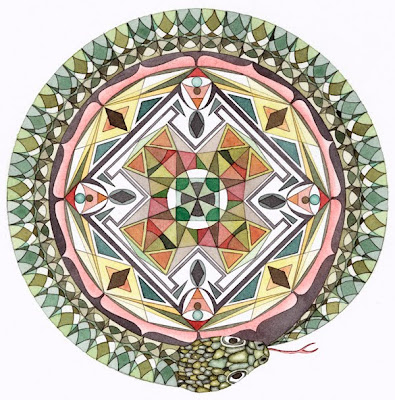 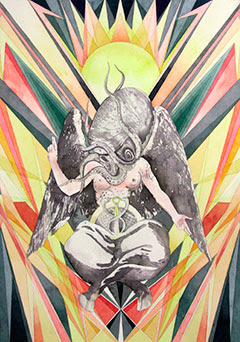 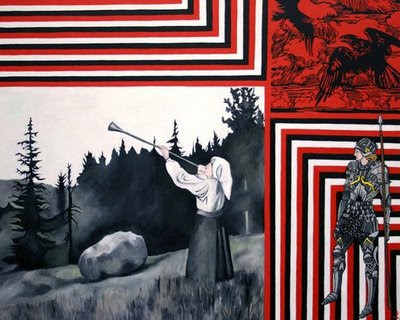 Posted by Tristan Eldritch at 4:13 PM No comments: 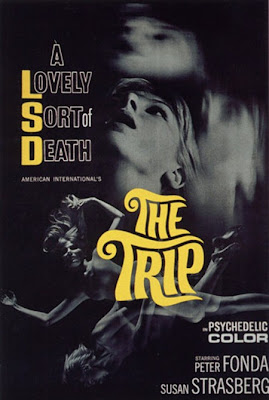 Written by Jack Nicholson and directed by the indefatigable Roger Corman, The Trip is a severely entertaining and groovy counter-culture exploitation flick, and can be seen in its entirety here:

Posted by Tristan Eldritch at 3:48 PM No comments:

The Illuminatus! Trilogy 37 Years On, or How We Learned to Start Worrying, and Love the Illuminati. ( Part 1) 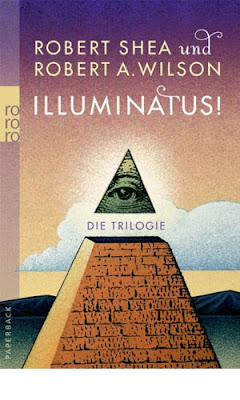 I read Clive Barker’s The Great and Secret Show in my teens, and didn’t much care for it even then. It has, however, one great chapter early on. In 1969, an egocentric loser called Randolph Jaffe finds himself sorting mail in the Dead Letter Room of the Omaha Central Post Office. Initially, Jaffe hates the job, but gradually he begins to become fascinated, even obsessed, by the strange world that is tangentially revealed through the lost missives of America’s vast underbelly. In time, a strange pattern starts to emerge, and Jaffe sees fleeting glimpses here and there of a mysterious spiritual underworld called the Art. Like Oedipa Mass in The Crying of Lot 49, Jaffe is initiated into a great conspiracy whose symbology is hidden everywhere in plain sight.

In the more or less real world of 1969, Robert Shea and Robert Anton Wilson were executive editors at Hugh Hefner’s Playboy magazine, where they had a Dead Letter Office experience of their own. In reading correspondence from Playboy readers relating to the emotive issue of civil liberties, the pair were exposed to a myriad of paranoid rants and convoluted conspiracy theories. As Richard Hofstadter pointed out in his now legendary 1964 study The Paranoid Style in American Politics, a kind of apocalyptic rhetoric of paranoia and conspiracism had been a pervasive part of American political discourse since the country’s inception:

In recent years we have seen angry minds at work mainly among extreme right-wingers, who have now demonstrated in the Goldwater movement how much political leverage can be got out of the animosities and passions of a small minority. But behind this I believe there is a style of mind that is far from new and that is not necessarily right-wind. I call it the paranoid style simply because no other word adequately evokes the sense of heated exaggeration, suspiciousness, and conspiratorial fantasy that I have in mind.

Historically, Hofstadter argues that a variety of groups have been subject to this kind of populist paranoid fervour, with Jews and the various secret societies and fraternal orders taking by far the lion’s share. Hofstadter acknowledges that these anxieties are not in every instance completely unjustified; however, the language and mentality of the paranoid style is one that is always exaggerated to a peculiarly apocalyptic pitch:

Anti-Masons were not content simply to say that secret societies were rather a bad idea. The author of the standard exposition of anti-Masonry declared that Freemasonry was “not only the most abominable but also the most dangerous institution that was ever imposed on man…..It may truly be said to be HELL’S MASTER PIECE.”

In expounding the history of conspiratorial panics in America, Hofstadter makes reference to a group that could scarcely have been particularly familiar to the average citizen in 1964: the Bavarian Illuminati of Adam Weishaupt. The Illuminati were, as far as any perusal of verifiable history can ascertain, a short-lived, not very effective, and perhaps not even particularly interesting group of Enlightenment free-thinkers formed in 1776 and modelled on the organisational structure of the Freemasons. It is one of the peculiar quirks of cultural history that the popular imagination would ultimately come to adopt this minor group of rationalist utopians as the universal mascot of nebulous, all-pervasive and all-controlling evil. Contributing somewhat to the irony of all this is the fact that the crucial catalysts to the emergence of the Illuminati into pop culture infamy were a pair of hippies goofing off on Hugh Hefner’s payroll in the late sixties. Conspiratorial panic-mongering, as Hofstadter suggests, was a pervasive element of American political discourse; but in 1969, when Shea and Wilson began to discover the paranoid marginalia of American society, conspiracy theory as we understand it today was completely absent from mainstream discourse and popular culture. The legitimate and significant role played by esoteric and fraternal societies such as the Freemasons in American history and politics was a fact little noted or discussed by the culture at large. Nobody, with the exception of right-wing cranks, was particularly aware or concerned by the existence of groups such as the Council on Foreign Relations or the Bilderburg Group. The only significant would-be world-dominating secret society in the popular culture of the day was James Bond’s camp, feline-fondling antagonists SPECTRE, who, interestingly, in 1969’s On Her Majesty’s Secret Service had graduated to using Manchurian Candidate-style mind control (on an international bevy of beautiful women, naturally.) 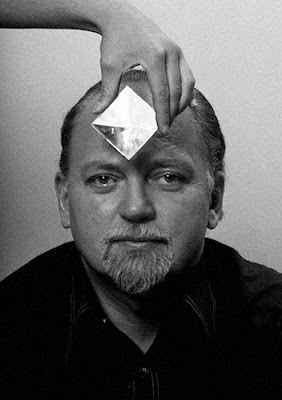 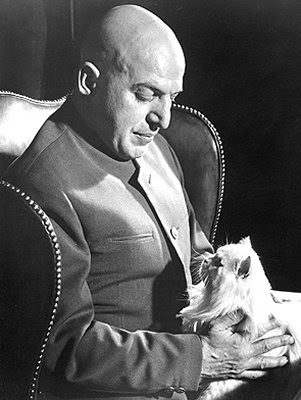 Was Ernest Stavo Blofeld one of the Tramps Arrested in a Boxcar near the Grassy Knoll?

Through their discovery of America’s underground folk-lore of conspiracy theory, Shea and Wilson discovered a nexus of hidden facts and feverish imagination, a gonzo re-writing of history that revelled in the pot-head’s love of lateral connections, coincidences, and synchronicities. They came to the prescient realization that somewhere in all these illusionary emergent patterns was a hell of a yarn. Or two. Or 23. Hence, they began work on the Illumintus! Trilogy, a fictional thriller whose simple initial premise was that all the craziest and most paranoid conspiracy theories were, in fact, true. They sought to compose a master-narrative that would weave together all existing crazy conspiracy theories, and raise the stakes by introducing some even more unlikely and out there additions of their own invention. They introduced elements of H.P. Lovecraft’s Cthulhu Mythos into the conspiratorial stew, little realizing that Kenneth Grant, and after him various Chaos Magicians, would one day avow that the trans-dimensional cosmic depravities of the Providence bard were no mere fictions. 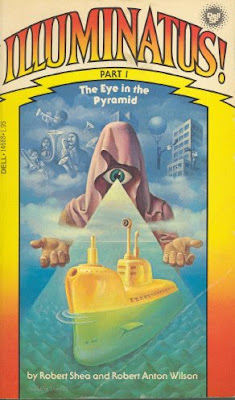 But if the Illuminatus! Trilogy began life as a Byzantine shaggy dog story, it became something else in the telling. The trilogy was written (barring some late revisions) between ’69 and ’71, and although it didn’t see publication until 1975, it would be an understatement to say that Illuminatus was a novel of the 60s. It is arguably the novel of the 60s, a book that is as encyclopaedic in its embrace of the counter-culture as it is of way-ward conspiracy theories:

And Joe Malik – ex-Trotskyist, ex-engineering student, ex-liberal, ex-Catholic –heard himself saying, ‘Yes.’ And heard a louder voice, unspeaking, uttering a more profound ‘yes’ deep inside himself. He was game – for astrology, for I Ching, for LSD, for demons, for whatever Simon had to offer as an alternative to the world of sane and rational men who were sanely and rationally plotting their course towards what could only be the annihilation of the planet.

Everything that was happening in that period – the sexual and neurochemical revolutions, the popular revival of occultism and the emergence of Anton Le Vey’s Nietzschean/Randian brand of Satanism, the conflicts between the pragmatic old guard of left-wing political activism and the Situationist surrealism, or ‘Groucho Marxism’, of the Yippies – the Illuminatus! Trilogy absorbed it all like water to a sponge, or perhaps more aptly, like bong-smoke into the lungs and synapses of a monumental pot-head. It is truly the Summa Theologica of the psychedelic era.

Posted by Tristan Eldritch at 6:21 PM No comments: