“Weaving Spiders Come Not Here”: The Utterly Strange (and True) Tale of the Bohemian Grove. 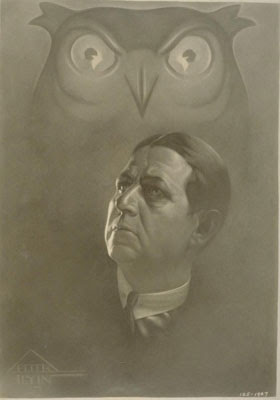 “Nothing can exceed the solemnity and the stillness of the redwood groves of , unless it be the great eucalyptus forests of . The song of the birds is seldom heard in these quiet isles, and even the smaller animals do not appear to haunt the groves.”

“Did you say the Bohemian Club? That’s where all those rich Republicans go up and stand naked against redwood trees, right? I’ve never been to the Bohemian Club, but you oughta go. It’d be good for you. You’d get some fresh air.”

This has to be one of the most jaw-droppingly surreal things I have ever heard of. I don’t believe in massive conspiracies and All-Powerful Secret Societies, but…….. (more whirring of Theremins) in San Francisco in 1872, a small group of journalists formed a private club at the Astor Hotel on Sacramento Street called the Bohemian Club. The original members were basically learned, monied men who felt a certain disdain for what they perceived as the plebian character of post gold-rush Californian culture. They longed for the gravitas of the , and the daring excitements of the fashionable European capitals, and modeled themselves after a similarly erudite group in called the Century Club. They choose the owl as their symbol, and Shakespeare’s line from A Midsummer Night’s Dream: “Weaving Spiders Come Not Here” as their motto.

It seems that initially, the club was more or less true to its name, and membership was based around considerable wealth, artistic talent, and intellectual prowess. However, from the very beginning, the Club’s Eurocentric pretensions dwindled fast, and the interests of commercial and political power came increasingly to the fore. Slowly, it evolved into a highly secretive, all-male club whose membership history is a staggering role-call of the American military, political, and media elite; every Republican president since Calvin Coolidge has been a member of the Bohemian Club. In 1878, several dozen Bohemians took to the secluded redwood forests of Sonoma Country, some 75 miles outside , for a private revelry which they called the “Jinks”. The New Times article of 1889 describes the Redwoods thus: “In this grove, the trees stand so thick together that at midday the sunlight filters through only dim rays. The trees are not so large as in many other parts of the timber belt of this state, but they are extremely graceful, rising like Greek columns to a height of 200 to 300 feet. The peculiarity of the redwood is the absence of all branches for the first 50 to 100 feet. Then the upper foliage has a delicate, feathery appearance that distinguishes the tree from the pine, hemlock, or cedar. The green of the foliage is the darkest shade known in nature, and the balsamic odors are more pronounced than that of the pine. The mazes of dark foliage come out strongly against the cloudless blue of the sky, producing effects which few Californian painters have been able to faithfully reproduce, though many have attempted the task.” Something in those forests captured the imagination of the Bohemians, and the “Jinks” of 1878 marked the beginning of an increasingly elaborate and utterly bizarre tradition which continues to this day.

In 1899, the Club bought a 160 acre piece of land in the ; it was the first of 26 such purchases spread over a 67 year period. Today, they own 2, 712 acres. Guarded like a virtual Fort Knox, containing facilitates to lavishly camp about two thousand people, it is called the Bohemian Grove, and its annual summer camp for the powerful male elites of America and the world have become the stuff of conspiracy legend. In mid-July every year, the Grove holds a three week encampment for some of the most powerful men in the world. (The injunction against the presence of women is absolute, extended even to staffing.) The initiation fee is 25, 000 dollars, plus yearly membership dues, and the waiting list for membership is believed to stretch from 15 to 20 years. Though shrouded in secrecy, we have a good idea of the bulk of what transpires during this three week period. It is best described as a mixture of the American summer camp and the classical Greek symposium. The influence of Greek paganism is quite pronounced, with a series of Grove Plays being enacted, including a more grandiose variety which are called the “High Jinks”, and a more frivolous form of musical comedy called “Low Jinks.” Those productions are said to boast quite elaborate sets, costumes, and pyrotechnics, and naturally must have recourse, like the dramas of and Elizabethan England, to transvestitism for the female roles. 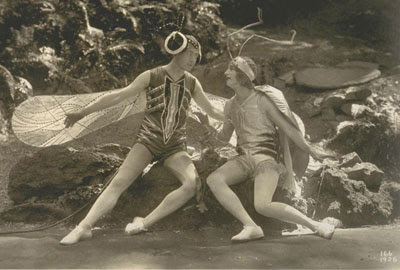 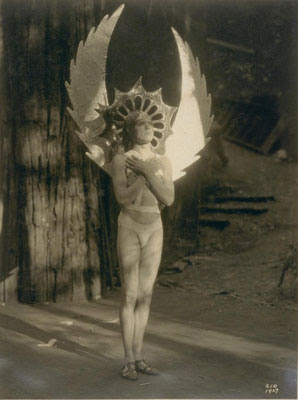 Weird Scenes inside the Grove.

President Herbert Hoover once called the Grove “the greatest man’s party on earth” , and it seems that a great deal of unfettered male revelry goes on. The elites are said to enjoy the freedom of excessive outdoor drinking, urinating, and apparently even a fairly high percentage of homosexual shenanigans, under the shadow of those towering redwoods. (Nixon, with typical charm, labeled the event “very faggy” in private conversation, adding “I wouldn’t shake hands with half those people in .”) This, in essence, is how the Bohemian Grove sells itself to the world: as an extravagant, harmless blow-out for the leaders of the free world. The Club motto “Weaving Spiders Come Not Here” is said to be a strict prohibition against any kind of business or political intrigue intruding upon the camp’s easy going escapism and high-jinks. This may be for the most part true, but it is only half the story. It is said that the Manhattan Project, which would later produce the Atomic Bomb, was conceived at the Grove; that Eisenhower was chosen there as the Republican presidential candidate in 1952; that Nixon and Reagan solidified their political futures in close consultation amid the pageantry of the Grove. Before one collapses completely into the conspiracy K-hole, however, it should be noted that actor/writer Harry Shearer, of Spinal Tap and Simpsons fame, and colored side-kick par excellance Danny Glover have both attended at least one Bohemian Grove event. Then again, the conspiratorial worldview really just depends on how far you are prepared to allow for the tentacles to reach. Radio talk show host Alex Jones, and shape-shifting lizard visionary David Icke have really ran away with this one, and in this case, I actually don’t blame them. Because this is where the story starts to get really strange. Pseudo-sacrificial rituals at the foot of 40 foot giant owl statues strange. 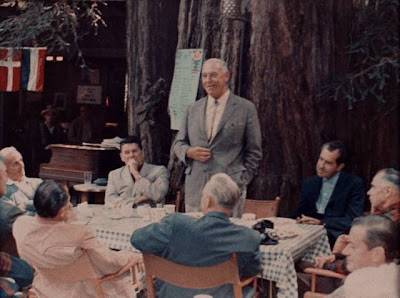 Weirder Scenes. This extraordinary picture was taken in the Grove in the late fifties. The man standing is Glenn T. Seaborg, a Nobel prize winning chemist. Sitting at either side are Ronald Reagan and Tricky Dicky. Reagan was still a B-movie actor at the time.

There are certain things which, though certainly true, possess such a transcendent level of camp strangeness that they transform the world we live in into some kind of deranged B-movie extravaganza. This is certainly one of those things. I don’t know how else to preface this, other than by saying that it is all a matter of uncontested record. In 1885, Joseph C. Redding, musical genius and attorney for the Southern Pacific Railroad Company, was elected president of the Bohemian Club. Under influences that remain obscure to this day, devised a ritual called the Cremation of Care. The Cremation was initially designed as a cathartic spectacle to follow up the “High Jinks.” Latterly, it was moved to the first night of the camp period, and is still enacted today as a symbolic ritual designed to convey the exorcism of all trouble, stress, and weariness from the denizens of the Grove. A ferryman sails a boat across a lake, where he is met by a group of dark, hooded figures. The ferryman then conveys an effigy of Care (called Dull Care) to the hooded figures. Dull Care is then placed on an alter, and, at the end of the ritual, set on fire. Accompanied by dramatic music and pyrotechnics, the whole thing takes place at the base of a 45 foot, moss and lichen covered statue of an owl. The B-movie grandeur extends beyond even this. The owl statue is hollowed out, containing electrical and audio equipment within, and is thus rigged to “speak” with the voice of the late, legendary anchorman Walter Cronkite, a former member of the club. 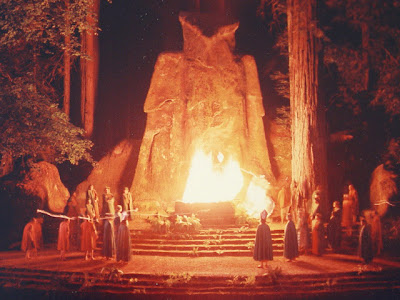 Well, we’ve only just scrapped the surface of this rich subject, and will certainly return to it, by and by. For the moment, let it suffice to say if you that if you are ever asked the question Is there a Place on this Earth where the World’s Most Powerful Men participate in a Pseudo-Sacrificial Ritual at the Foot of a Giant Owl that speaks with the Voice of Walter Cronkite, the answer, weirdly enough, is yes. Bohemian Grove, seventy five miles outside of San Fran. It might come up in a pub quiz.

Posted by Tristan Eldritch at 7:21 PM

But Walter Kronkite is still alive. For all we know, he is actually inside that giant owl.

Oh, hell, i didn't realize he was still alive! Yeah, he could very well be seated somewhere in the owl's head with a megaphone....

I was looking for info on weaving, and found this post! Fascinating! I have a thing for Greek Mythology and conspiracy theories, so I'm trying to not mind that they've apparently hijacked two of my favorite Athena-related symbols for their odd purposes. :-) I only wish I could see a 40-something foot tall statue of an owl that speaks with Walter Cronkite's voice! LOL!

i do have to say...is this any different than burning man? except for the fact that these are leaders of the free world :)

This video explains alot about that owl & its meaning.
"Athena, owls, cremation of care and the NWO"
http://www.youtube.com/watch?v=SxjmV1-bBXo

Great summary (and in general I'm loving the combination of subjects on this blog), but a minor correction: that photo of Reagan, Seaborg and Nixon was actually from July 23 1967 when Reagan was already a few months into his first year as governor of California, not the late fifties when he was still a B-movie actor.

I find I fit the definition of bohemian, Artistic expression is My daily doing by nature but; bohemian lazy I sometimes can scarcely be bothered even to move and thus I suffer for My fart.

I also lead a group called The Night Owl Association and by lead I mean do fuck all so I was made for this and I know; evil, poo poo, boogieman whatever, sounds like the whole point is to leave that shit behind.

Thing is that the membership fee is way out of My league as is travel and even a cabbage but what do you expect? I'm a fucking bohemian! Want Me to get a job or sumfin?

Should be OK hey? It's a fucking Owl not a frog.

Money doesn't matter coz My new buddies that I am yet to make can spot me I'm sure.. Just until I'm famous... Oh! and until I got more shoes than Imelda R. Marcos.. (Priorities ya know?)

Did you miss it?

"I also lead a group called The Night Owl Association and by lead I mean do fuck all."

I was born for congress too damn it!