Elves and Eschatology: The Shape of History. 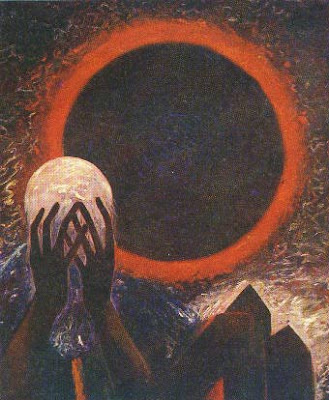 Though largely unappreciated in their own time, Dick’s novels would come to resonate as the most lucid literary expression of contemporary anxiety since those of Kafka in the first half of the century. The recognition of Dick’s work was slow at first, but it witnessed an explosion in the nineties, when all areas of popular and academic culture seemed to be imbibing some variety of ontological uncertainty. If the scientific revolution had gradually built up a grand, immutable edifice of cold, objectified material reality, whose most characteristic art-forms were journalism and the novel of realism, then the Information Age, whose characteristic products could be anything from New Age channeling to Superstring Theory, seemed to all but topple that edifice into a channel-surfing, paradigm-hopping roller-coaster of simulation. The ideal of scientific clarity, which might once have replaced religion as a dominant worldview, had come increasingly to resemble a staid habit to which people dutifully supplicated themselves on Sundays, while they were otherwise tripping out to Eastern-infused interpretations of quantum physics, being abducted by oval-eyed aliens, cracking da Vinci, conspiracy, and Kabala codes, projecting their egos into media-spun fantasies of utopian escapism, and generally subscribing to the notion of designer and virtual realities.

To some commentators, this erosion or dissipation of the real assumed a negative and dystopian character. According to the interminable diatribe Jean Baudrillard has been cranking out in steady, slender volumes since the ’68 riots, the modern proliferation of media technologies has produced a hall of mirrors in infinite regress, or an endless field of simulation which no longer possesses an original reality referent. I assume that Baudrillard considered this an uncongenial state of affairs, in some kind of residual spasm of Marxist rancor. Baudrillardian ideas are better expressed in the fictions of Borges and Philip K. Dick, or the recent cinema of David Lynch; his own prose is as dehumanizing and soul-destroying as the vast mass media apparatus itself.

Most of these reality fluctuations, however, followed the hopeful, escape velocity paradigm, which might be likened to the gnostic notion of finding a liberating crack in the demiurgic architecture. A generation of undergraduates, exposed for the first time to vainglorious linguistic contortions of Jacques Derrida, believed that they were boldly unraveling the thread of an epoch worth of phallogocentric maya, with the white European male as their dastardly Archon of choice. Meanwhile, running concurrently with this academic avowal of linguistic idealism, the writings of Robert Anton Wilson exemplified a radicalized form of postmodern relativism, birthed in a crucible of Eastern mysticism, Western chemicals, and quantum uncertainty theory: “The notion that “reality” is a noun, a solid thing like a brick or a basketball, derives from the evolutionary fact that our nervous systems normally organize the dance of energy into such block-like “things”, probably as instant bio-survival cues. Such “things”, however, dissolve back into energy dances – processes or verbs – when the nervous system is synergized with certain drugs or transmuted with yogic or shamanic exercises or aided by scientific instruments. In both mysticism and physics, there is general agreement that “things” are constructed by our nervous systems and that “realities” (plural) are best described as systems or bundles of energy functions.”

Terence McKenna shared with the emerging academic movement a sense that the universe was somehow composed of language; he contended that mankind had lost touch with reality only when we had copper-fastened the notion of reality as an objective, impermeable “outside”; only when we had forgotten what magical societies understood as a matter of course: that the linguistic stuff of the universe was to some degree a creation of our imaginations, and as such, always subject to the art of the subtle conjuror. His ultimate dream for 2012, like that of William Blake before him, and generations of Neoplatonic mystics before Blake, was that we would return en masse to the primal, unfettered realm of the imagination, from which all realities had been abstracted, and which all realities had gradually usurped in the fall into historical consciousness.

As the tendencies of the academy dovetailed with those of the psychedelicists, the vision of McKenna and his elk was the mystical first cousin to the adherents of the technological Singularity. The mathematician and physician Frank J. Tipler has famously, and controversially, argued that a computer will one day exist which is capable of producing an infinite simulation within a finite amount of proper “time.” By recreating simulations of all possible quantum brain states, this computer would effectively resurrect all intelligent beings that have ever lived, thus producing a combination of the Christian after-life and the holodeck of Star Trek: The Next Generation fame. Presumably, whether or not Hitler gets a pass would be one of the moral quandaries inherent in such a scheme. It may be that we already exist within such a super-simulation, and have merely forgotten how to activate the “cheats.”

Expressing itself in a proliferation of techno-utopias, as well as a variety of popular entertainments such as The Matrix and The Truman Show, the salient features of the nineties subconscious were a sense of the end of history, and the end of the “spell” of objective, empirical reality. Whether this represented the brief, flickering potential for an evolutionary transformation, or merely the decadent fantasies of an affluent society which had precariously cut itself off from the ineluctable privations and fluctuations of the natural world, remains largely a moot point. The September 11 attacks changed all of that; they shattered our illusion of a sheltered, post-historical West, and ushered history into one of its most truly Saturnine phases. The many worrying storm clouds which millennial utopians had pushed out to the periphery of their vision – such as the growing ecological crisis, the profound gap instigated by aggressive consumerism between the wealthy and impoverished, and the always ambiguous character of technological advancement throughout the ages – came increasingly to represent the salient features of twenty first century life. While the nineties were characterized by post-Berlin wall optimism and computer-generated hubris, our contemporary collective memories are seared by tsunamis, floods, and toppling skyscrapers. According to Erik Davis: “The collapse of the dot.com bubble put the visionaries back in their padded rooms, and this “return to the real” was cemented by 9/11. Utopian euphoria and posthuman giddiness are out; bottom lines and familiar brands are in. Even academics and intellectuals, formerly taken by all manner of French discursive diseases, have staged a sort of Revenge of the Enlightenment, fomenting a new distrust of the more irrational, surreal, and visionary dimensions of the contemporary project.”

All of the utopian dreams we have looked at in this thread, be they mystical or technological, share the salient characteristics of an eschatology: the sense that history is for the most part a negative, destructive process, but one which nevertheless contains within its working-out a wider pattern or shape, which ultimately tends towards a redemptive, history-transcending event. This remains a remarkably persistent conceptual framework within our psychological make-up, despite a common desire in the minds of contemporary educated people to regard such things as the erroneous, almost semi-schizophrenic divination of signal where noise abounds. Perhaps to provide fuel to such an argument, the loss of a providential model of history has lead to a large degree to the emergent popularity of envisioning an all-pervasive conspiracy as the great guiding hand in our affairs. While these darker manifestations of eschatology will continue to go into overdrive in these uncertain times, it may be no bad thing, sometimes, to yield to that part of the mind that sees ancient, inscrutable faces emerge out of the contours of Martian mountains. A thorough perusal of history does reveal certain oddities and patterns, such as spontaneous evolutionary leaps and the simultaneous emergence of ideas in disparate, unconnected parts of the globe. In the ancient Greek pantheon, the most despised deity was Chance; in the modern world, a vast horde of paranoiacs and visionaries will continue to construct systems sublime and ridiculous, in eternal opposition to the old fatalist adage Shit Happens.

Posted by Tristan Eldritch at 1:33 PM