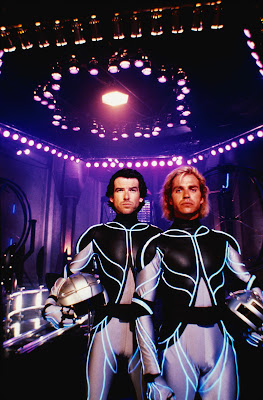 High Frontiers begat Reality Hackers, and Hackers finally begat Mondo 2000, “mondo” coming from Queen Mu because it sounded decadent and would look good on the masthead, and “2000” from Sirius because everybody back then was “using that to sell shit.” As the magazine evolved, the seemingly obligatory funny Pychonesque names continued to arrive thick and fast: Mondo Connie, Lady Ada Lovelace, Nan C. Druid, Marshal McLaren, and my personal favorite: G. Gordan MIDDI. Published under the then revolutionary auspices of desk-top publishing software like QuarkXpress and Adobe Photoshop, Mondo propagated a uniquely off-kilter world-view, which came on like the lush decadence of La Dolce Vita refracted through a prism of Californian psychedelia and giddy transhuman hubris. Written in a slangy, insider prose that combined the argots of computer hackers and esoteric New Age cultists, Mondo opened the lid an a cliquey world of virtual sex, smart drugs, virtual reality parties, designer psychedelics, and various fantasies of nootropic, nanotechnological self-advancement. Mondo was also one of the chief disseminators of the most surreal counter-cultural meme of the nineties: the self-transforming machine elves of hyperspace. 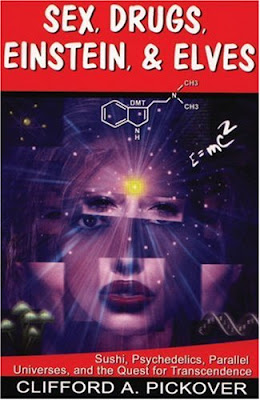 By the hey-day of the Mondoids, Terence McKenna was a fully fledged guru, appearing on stage to preach eschaton over the throbbing techno of the Shaman, getting name-checked by cult comedian Bill Hicks, and seeing his ideas infiltrate the world of mainstream American comic books via English invasion visionaries Grant Morrison and Alan Moore. Still proclaiming his predictions for the 2012 Timewave, by now transformed, like virtually everything else in the early nineties, into a commercial computer program, McKenna had also become a typically evangelical promoter of DMT use. Described by Daniel Pinchbeck as the “psychedelic equivalent of bungee jumping,” DMT is a naturally occurring tryptamine and potent mind-altering drug. When smoked, its effects are very brief in duration, but apparently intense enough to shatter every cozy rationalist paradigm and worldview going. DMT is possibly one of the most intriguing substances around. Minute traces of it are produced by the human body during normal metabolism, and this admittedly striking fact has placed DMT at the cutting edge of consciousness-exploration, both recreational and theoretical. An increasing number of both mainstream and outré theorists have argued that DMT may be the neurochemical wildcard responsible for such varied anomalies as dream imagery, near death experience, mystical epiphanies, and alien abduction. McKenna argued that DMT transported users not merely to another state of mind, but a whole other universe of incredible Escherian geometries, populated by its own intelligences and entities, which seemed consistent from one subjective experience of the drug to the next. His encounter with the notorious elves is described in typically florid manner:

“And what was going on in this place aside from the tastefully socketed indirect lighting, and the crawling geometric hallucinations along the domed walls, what was happening was that there was a lot of, ah, beings in there, what I call self-transforming machine elves of hyperspace. Sort of like jeweled basketballs all dribbling their way towards me. They were making objects come into existence by singing them into existence. Objects which looked like Faberge eggs from Mars morphing themselves with mandelian alphabetical structures. They looked like the concrescence of linguistic intentionality put through a kind of hyper-dimensional transform into three dimensional space. And these machines offered themselves to me. And I realized as I looked at them, that if I brought just one of these little trinkets back, nothing would ever be the same again.” ( Experience has taught me that discussion of the machine elves leads to largely unsuccessful job interviews, even when broached during the more informal “hobbies and interests” section. T.E.)

In many respects a product of their own insular, drug-addled sensibility, Sirius and his cohorts nevertheless crested a cultural wave. As the new journalism of the 60’s had been a voice commensurate with the radical effusions of that decade, Mondo 2000 spoke directly to a brief utopian blip in which people watched science fictions rapidly become tentative facts, and a global Revenge of the Nerds made the future seem, for a brief instant, firmly within the grasp of a generation of hyper-bright, sci-fi weaned geeks. Behind its impressive strangle-hold on the language and ideologies of the emerging technoculture, Mondo’s particular brand of subversion was politically neutral and hedonistically focused. “Fun” according to Queen Mu “is going to be the saving grace of our universe.” Much of the magazine’s pronouncements amounted to little more than an appeal to the libidinous, Dionysian aspects of the sixties counterculture, recast in a in a language of nineties technophilia:

“High technology enables us to explore sensuality far out on the New Edge…Why settle for passé kinkiness when you can actualize techno-aphrodisia from the infosphere?”

In a maneuver typical of the time, however, Mondo parried criticism by presenting itself as a self-imploding Warhol art-object, semi-celebratory and semi-satirical at the same time. The Mondoids virtual reality parties quickly came to represent for the nineties what Jay Gatsby’s mythical soirees did for the roaring twenties:

“A Mondo party might find a time travel expert being interviewed in one room, people playing word association games in another, others experimenting with weird mind-stimulation glasses, groups quietly chatting in conspiratorial whispers, or Bert Nagel and virtual reality expert Brenda Laurel leaping in the air to see if they could do a complete 360 degree turn without falling down. Rude pornography or Japanese animation videos flickered on monitors, figures preformed frottage on antique sofas. A journalist from GQ might be taking a piss on the lawn. One creature would trap people for entire evenings in conversations about how Sir Francis Bacon was actually William Shakespeare.”

Unsurprisingly, the mainstream media were eager to garner a handle on this Brave New World before it evaporated into yesterday’s color piece, and they descended on mass upon the Mondoids seeking exotic copy: “Having defined the nascent cybersexcomputerdrug culture, Mondo assumed the role of oracle to the rest of the media struggling to comprehend the trend. Sirius appeared on Donahue and Ron Reagan’s show. Reporters descended upon the Mondo house from all corners of the globe – Newsweek, Details, the Washington Post, the New York Times, the Chicago Tribune, the Los Angeles Times, and bureaus from – as well as all the local dailies.

What is cyberpunk? they begged. Tell us why cyberpunks wear mirror shades and drink Jolt cola. What is virtual sex like?”

Such cross-fertilization between mainstream and underground culture became increasingly common in the nineties, and much of it was focused around the concept of virtual reality. The technology itself turned out to be another media touted high-way to tomorrow that went nowhere fast, leaving behind The Lawnmower Man and a wealth of fast-dating, tacky memorabilia. The concept of virtual reality, however, encapsulated something far greater than crude goggles and graphics; it expressed a pervasive sense that reality itself was becoming an increasingly plastic and mutable medium.

Reality should be the most solid and incontestable of all phenomena, and yet it has been subject to much doubt throughout the ages. Many of the perennial philosophies regarded reality as a beguiling but ultimately aimless dumb-show; as a preliminary step in the ladder of true understanding and being. Plato famously regarded it as a series of flickering shadows cast unto the wall of a cave; in the Hindu tradition, the phenomenological world, called maya, was an illusionary veil that must be pierced in order to attain freedom from an endless cycle of fruitless reincarnation. Interestingly, in the mystical tradition throughout the ages, the illusionary nature of reality has generally been evoked in the positive sense of offering at least the potential for liberation and transcendence. In the twentieth century, such notions assumed a wide currency in the west, but also a distinct positive and negative polarity. In the 1960’s, for example, the psychedelic movement, having had its own maya-shattering epiphanies, eagerly latched onto the classic Eastern texts as guidebooks to the acid experience, and preached a similar gospel of joyous liberation from the false cycles of unreflective being. At the same time, however, the novels of Philip K. Dick envisioned the loss of a stable reality as a paranoid, alienating experience, thrusting his protagonists into shifting, schizophrenic Wonderlands of media-saturation and mental instability.

Posted by Tristan Eldritch at 8:15 PM

How Sir Tristram drank of the love drink

The achieving of the Sangreal

How Morgan Le Fay gave a shield to Sir Tristram

Thank you for following my blog. You have got to be a lot fun at parties!