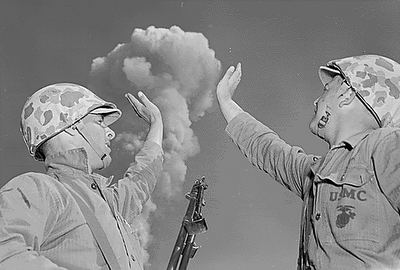 In the popular culture of our secular age, the gods, demigods, fairies and gnomes of the old mythic realm have returned as extraterrestrials.

Call me Einstein or Flash Gordon or just a screwball, I’m absolutely certain of what I saw!

Whatever did see, his credibility as a witness lead to a massive surge in the reporting of UFO sightings. Some 850 were reported in 1947, with the number peaking in the month following ’s encounter. The most logical and reductive explanation for the “flap” of ’47 is that a variety of unrelated anomalies and misapprehensions were transformed by the subtle dynamics of mass delusion into a palpable alien invasion. Mass delusion is a controversial and little understood phenomenon. It may be that the dilution of individuality required for the formation of cohesive societies occasionally breeds freak excesses and the production of certain collective reveries. Mass delusion of this kind tends to arise via the adoption of a particular interpretative bias, but the seemingly viral transmission of this bias remains mysterious, particularly in the earlier, less entangled and noospherical manifestations of the Global Village.

One of the most bizarre cases of this kind occurred in in 1954, when a series of tiny dents and dings began to appear in the windscreens of cars in the northwestern town of in late march. The small size of the dents lead the local police to suspect a gang of vandals armed with buckshot or ball bearings. Within a week, the mysterious nicks and dents had spread 25 miles south to Sedro Woolley and , and from there to the town of on by April. The dents arrived suddenly in Anacortes on the morning of April 13, and the local law enforcement sprang into action, setting up a roadblock at . (Actually getting to say the line “Set up a roadblock at !” must be a reward in itself.) The culprits remained at large. 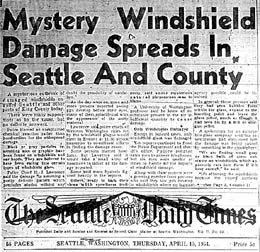 When the phenomenon hit , all hell broke loose. Windshield pitting reached epidemic proportions, operating at such a scale that the work of hooligans now had to be ruled out. Various theories were proposed, ranging from radioactivity caused by recent H-Bomb tests on the South Pacific, to cosmic rays, to the effect of electronic oscillations from a nearby million-watt radio transmitter. In the end, a team of scientists appointed by the president resolved that the dents were merely a normal by-product of use, and the dings, similarly, were the product of tiny coal dust particles which had been blowing in the area for years; people simply hadn’t noticed them before.

In his article about the Seattle Windshield Pitting Epidemic of 1954, Alan J. Stein isolates the key components of such incidences of mass delusion: “ambiguity, the spreading of rumors and false but plausible beliefs, mass media influence, recent geo-political beliefs, and the reinforcement of false beliefs by authority figures.” If the 1947 UFO flap, and the phenomenon in general, constitutes such a mass delusion evolving on a global and historical scale, then it could hardly be said to have possessed what most people would regard as a “plausible” belief at its base. In actuality, it had something far more potent: a popular fictional template which was in the process of acquiring the status of a myth or archetype. Myths and archetypes are something of an entirely different order to standard fictions. Standard fictions vary in form from forgettable novels and plays to the domain of most political speeches, excuses, and all conversations engaged at the behest of necessity and politeness. They are creations of reason and calculation. Myths, on the other hand, arise out of some kind of psychical need, as dreams emerge from scattered fragments of waking recollection; they embody a plurality of meaning, and express a relationship with the world; in doing these things, they acquire a firm lodging in the subconscious, and a certain irrational power which out-weights their physical implausibility.

In literatures and folk traditions throughout history, otherworldly and miraculous creatures have intervened in the lives of men in a variety of ways. They have enlightened some, abducted others; some they set aside for prodigious destinies, while others were merely subject to childish and inscrutable pranks. In the modern, secular world, aliens provided a compromise between the scientific, post-Copernican world, and the seemingly perennial, mythical longing for contact with a secret world of non-human intelligences. They were, from the beginning, an unlikely hybrid of technological futurism and the irrational realm of the supernatural. The first major chronicle of alien invasion was H.G. Wells’ The War of the Worlds, published in 1898:

“No one would have believed in the last years of the nineteenth century that this world was being watched keenly and closely by intelligences greater than man’s and yet as mortal as his own; that as men busied themselves about their various concerns they were scrutinized and studied, perhaps as narrowly as a man with a microscope might scrutinize the transient creatures that swarm and multiply in a drop of water. Yet across the gulf of space, minds that are to our minds as ours are to those of the beasts that perish, intellects vast and cool and unsympathetic, regarded this earth with envious eyes, and slowly and surely drew their plans against us.”

In the twenties and thirties, pulp magazines such as Amazing Stories and Astounding Science Fiction kicked Wells clinical alien intelligences into a variety of garish forms, creating an indelible iconography of monsters from outer space. Again, these creatures represented a hybridization of technological advancement with much older fears of mythical beasts and demons of both inner and outer space, often reiterating anxieties projected onto racial “aliens”: savagery, inscrutability, and a seemingly insatiable desire to steal our women.

It was this mythical stream that feed into the flying disks panic of 1947. It is a reductive mistake, however, to regard the phenomenon simply as a mass delusion fueled by pulp fiction. There were strange things happening in the skies in the late forties and fifties, things strange enough to warrant the serious attention of the president and the military establishment. The UFO belief has evolved as a constant and subtle cross-fertilization between popular culture and shadowy, real events. In this fashion, it has acquired a weirdly anomalous and paradoxical character, a blurry ontological status that seems neither entirely true nor false. The French astrophysicist and ufologist Jacques Vallee describes the UFO as belonging to “the domain of the in-between, the unproven and the unprovable…..the country of paradoxes, strangely furnished with material “proofs,” sometimes seemingly unimpeachable, but always ultimately insufficient….This absolutely confusing (and manifestly misleading) aspect may well be the phenomenon’s most basic characteristic.”

Posted by Tristan Eldritch at 3:26 PM