"At the very least, he is magnificently wrong"....Velikovsky and Worlds In Collision. 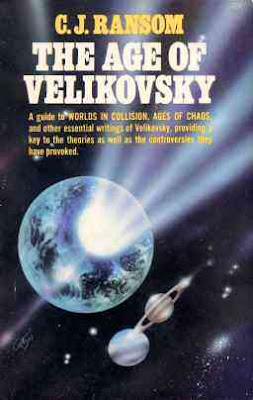 Another interesting relic from the 70s.  Though first published in 1950, Emmanuel Velikovsky's Worlds in Collision enjoyed it's greatest popular exposure and notoriety in the 70s.  Along with the Ancient Astronaut explosion initiated by Chariots of the Gods, Velikovsky's "catastrophist" theories proved hugely popular with audiences who were keen to revisit - and sometimes re-invent - the ancient past, while at the same time thumb their noses at the academic establishment.  In brief, the book posited that Venus was a relative newcomer to our solar system, having been ejected from Jupiter as a comet sometime in the 15th century BC.  The proto-Venus comet passed by earth orbit on two occasions, causing a series of extraordinary catastrophic events which are recorded in the world's mythologies, and which continue to scar the human psyche to this day.  Eventually, needless to say, the planets settle into the familiar orbits of the solar system which we know and sometimes love today.  This thesis elicited an intense reaction from scientists form the onset; in what came to be known as the "Velikovsky Affair", Harvard astronomer Harlow Shapley lead a campaign against the book prior to its publication.  Carl Sagan elongated and otherwise tortured the pronunciation of a great many words on the subject, though conceding that the attempt to suppress Velikovsky's book was the worst aspect of the story.  One senses the great frustration of scientists when an intuitively satisfying alternative narrative becomes a runaway success with mass audiences; there is an eternal conflict in the modern world between what Werner Herzog memorably called the ecstatic truth and the accountant's truth.  Steven Jay Gould later commented:  "Velikovsky is neither crank nor charlatan - although to state my opinion and that of one of my colleagues, he is at least gloriously wrong - Velikovsky would rebuild the science of celestial mechanics to save the literal accuracy of ancient legends."  But was it really to save the literal truth of ancient legends that Velikowsky constructed his beguiling edifice of research and folly?  The even-handed 1972 Horizon documentary below suggests another possibility.

Velikovsky was a psychiatrist who had trained under Wilhelm Stekel, one of Freud's proteges.  (Indeed, it was the great cigar stroker's monogram Moses and Monotheism which inspired Velikovsky down the path of comparative mythology and what might today be labelled alternative or forbidden archaeology.)  Freud's generation were deeply preoccupied and troubled by one particular idea above all others: that the World Wars had laid bare the second great faith of the western world following monotheism, which was the notion that human nature was governed in essence by reason.  Instead, the world had discovered that human beings were fundamentally irrational, and possessed by a profound death drive which the age of Reason had only made more technologically efficient.  In the advent of the nuclear age, this death drive threatened the whole species.  For Velikovksy then, the theory of ancient global catastrophes represented a primal trauma which could effectively explain the existence of the death drive.  He had taken the core supposition of psychoanalysis - that the irrational or neurotic behavior of the present is explicable and potentially curable by virtue of discovering a repressed and forgotten incident in the past - and applied it to the whole species and its collective history.  While it is at present unlikely that Velikovsky's idiosyncratic ideas of celestial motion will ever find academic respectability, this idea of the distant past as a kind of unconscious to the present, whose scattered ruins and mythic fragments are in a sense to the modern mind like the partial recollections of a dream, is a pregnant notion indeed - if not to the accountant, then at least to to the poet with whom he must be at loggerheads.

Posted by Tristan Eldritch at 8:26 PM