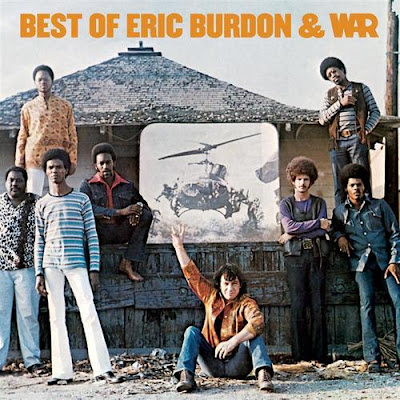 Eric Burdon and Ginger Baker established their reputations during the British beat invasion of the 60s.  In the early 70s, both artists started to explore African-influenced funk as a new departure from the North American blues-based rock and psychedelic explorations which had dominated the previous decade.  Perhaps they were ahead of their time in this regard; neither project enjoyed the success of their iconic 60s groups, or are as well-remembered today.  This post takes a brief look at this interesting and forgotten strand of British beat music history.  Burdon, of course, is best known as the vocalist with the Animals.  Having been impressed all my life with the intensity of his performance of House of the Rising Sun without ever actually seeing what the group looked like, it somehow made it all the more impressive to discover that those awesome vocals were coming out of the mouth of an unremarkable guy who looked barely out of his school uniform:

In 1969, Burdon hooked up with an eclectic, multi-racial Californian funk band called War.  The group developed a fearsome reputation as a live act, and enjoyed moderate success throughout the 70s.  I've only ever been marginally aware of Burdon's recordings with War, but this clip of them in Copenhagen in 1971 is just astonishing:

Ginger Baker, meanwhile, will always be primarily associated with Cream (a band I personally can't stand.)  Also in '69, Baker formed a jazz/funk fusion group called (rather awkwardly) Ginger Baker's Air Force.  Although boasting more white faces than War (Steve Winwood was a member), you can definitely hear a strong African influence - Baker moved to Lagos in 1970 and befriended the great Fela Kuti.  Air Force was a very short lived project, yielding only two albums in 1970, but they piss from on high on Cream if you ask me:

I discovered Air Force through the funny, fascinating, and depressing documentary Beware of Mr. Baker

Posted by Tristan Eldritch at 7:18 PM