EVERYBODY RELAX AND WATCH ME WORK: James Brown Live At the Apollo, 1968. 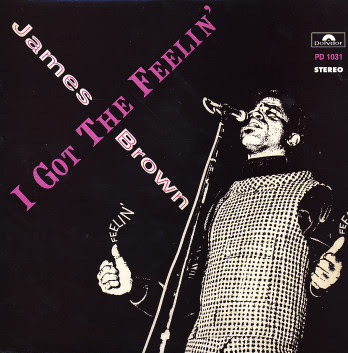 James Brown's Live at the Apollo, Volume II is an amazing, landmark live set.  It captures the transition from JB's roots in more conventional soul and r and b into the sparser, grittier, groove-orientated funk sound that defined African-American popular music in the 70s, and casts a long shadow over dance music and hip-hop culture to the present day.  Of course, the sound developed slowly over a period of years, going back to Out of Sight and Papa's Got a Brand New Bag in '64 and '65, but for me, if you want one track and one moment that really crystallizes the birth of hardcore funk, it's got to be the recording of There Was a Time on the '68 Apollo record.  I first heard this record in New York when I visited the States for the first and only time in my early twenties.  Going to America is a really exciting, surreal experience for many Europeans, because we grow up with America as the semi-mythical landscape of movies and television and popular music.  So riding the subway is a surreal experience - you expect Walter Hill's Warriors or the takers of Pelham 123 to bust on at any stop.   I bought Live at the Apollo on cd on Montague Street, and started listening it on the subway home on what cats used to call a CD walkman, feeling like I was injecting all the bustling excitement of post-war urban America straight into my veins.  Side 2 features the centerpiece of the album, a long medley of Let Yourself Go, There Was a Time, and Cold Sweat.  The groove of There Was a Time flows so sinuously out of Let Yourself Go that you barely register it starting - suddenly it's just there, repeating and swelling and building, and JB, both leading the sound and being carried along with it, sings or screeches or incantates baby BABY BAY-BA BAAY-BAAA  My head felt like it was going to explode from the intensity of this track.   (The only other time I can remember being similarly overwhelmed by the intensity of a song was when I heard Sister Ray by the Velvet Underground at age 13 and was almost frightened by it.)

This guy tipped me on the shoulder and said "What you listening to?"  and I said "James Brown Live at the Apollo" and he says "That's my roots, man, that's my roots!" and whipped the walkman off me and started shuffling up and down the train-car, screeching and whooping.  And I was thinking to myself Man, this awesome and I hope that cat comes back with my CD walkman.

Anyway, here's some primal and astonishing footage of James Brown performing in the Apollo in '68 which gives an adequate sense of what a sheer physical dynamo the man was during that period:

I can't find the full medley from Live At the Apollo on youtube, but here is the track that counts - still one of the most badass pieces of live music - and most amazing examples of a performer's absolute control of band and audience - that I've ever heard:

Posted by Tristan Eldritch at 7:39 PM

Labels: james brown is my religion