Before Lady Gaga, the Monkees were Victims of Illuminati Mind Control. 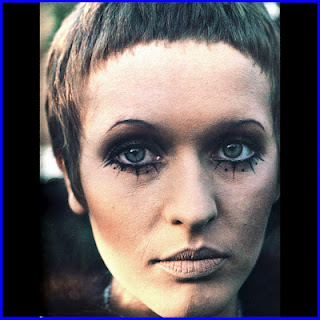 The above is the first time I've ever used the collocation "Lady Gaga" and "Illuminati Mind Control" in a headline on this blog; I'm sure it will cause a massive spike in traffic.  In this way out clip from the 1969 NBC television special 33⅓ Revolutions Per Monkee, the Monkees receive Monarch-like programming from beat sensations Brian Auger and Julie Driscoll, who rather unexpectedly turn out to be mid-level archons on the global Illuminati chess-board.  Can't seem to embed, so here is the youtube link.  (Hope Manson wasn't watching).  Julie cut a really striking figure on stage, like Ziggy Stardust's earth-born sister.  Here's a great blast of the Trinity rocking it live on French television:

Julie Driscoll and the Trinity's stunning version of Let the Sunshine In is about the only thing I've ever really liked about the musical Hair.   Well, that and Gelt MacDermot's First Natural Hair Band.  Edit: Oh, and also this kitsch masterpiece and old favorite of this blog:

Posted by Tristan Eldritch at 7:14 PM