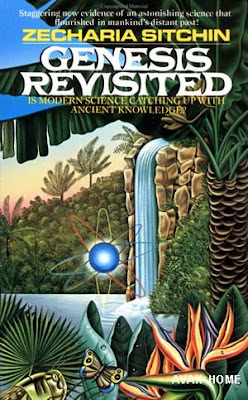 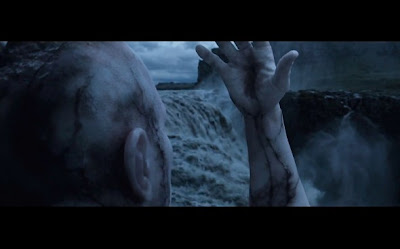 Part 2: The Return of the Ancient Astronaut.


The space jockey was doubtless one of those things that derived much of its fascination from lack of explanation – a tantalizing detail of a larger picture that was left to the tentative elaboration of the viewer’s imagination. But the idea that something might be best left a mystery is pretty much an anathema in today’s Hollywood landscape, where everything that once connected with audiences has to be revisited, revived, or rebooted in some fashion or another. Hollywood seems to have migrated to a condition similar to Greek tragedy, in so far as originality is concerned: novel or original scenarios are eclipsed by the seasonal retelling or variation of existing myths. Hence, while many are baffled by the need to retell Spiderman’s origin story again this summer, with Sam Raimi’s version so fresh in people’s minds, this detail would seem natural enough to an Aeschylus, though much else in the syntax of Spiderman might baffle him.

It’s not surprizing then that an aging Ridley Scott should be returning in the summer of the alleged end of the world to the mythos that made his name in the very different Hollywood of the late 70s. It also seems very apt, in the context of the impending folklore apocalypse, that Prometheus should attempt to revive another slumbering cultural spectre with a particular resonance to the 70s: the ancient astronaut. The ancient astronaut idea basically posits that humankind experienced some kind of contact with an advanced extraterrestrial species in the distant past, and some garbled memory of this paleocontact experience is preserved in ancient myths, artworks, and feats of engineering scattered across the globe. The full extent of extra-terrestrial interference varies according to different versions – in some the aliens are merely responsible for educating and civilising the human race; in others, as in Prometheus, human beings are themselves a product of direct alien genetic tampering. 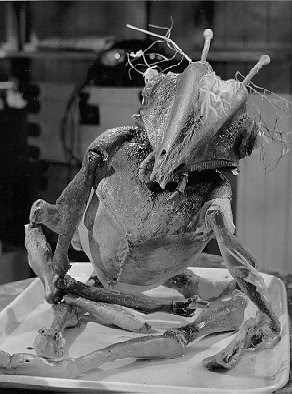 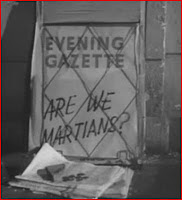 ARE WE MARTIANS?: The origin of the species according to Quatermass and the Pit.

The ancient astronaut theory has very complex and tangled roots in the borderland between fact-based speculation and weird speculative fiction. At heart, it seeks to resolve a genuine historical and anthropological enigma: the apparent global ubiquity of myths of otherworldly intervention in human affairs. It remains a conundrum that, human vanity notwithstanding, ancient cultures show a marked reluctance to claim the crowning achievements of human nature as their own. In a variety of myths, the fruits of higher civilisation – language, writing, engineering, ethics, astronomy, and so on – are always envisioned not as hard-won human achievements, but rather as the “fire of the gods”, stolen for man, as in the myth of Prometheus, or given freely by some otherworldly benefactor. Nevertheless, some of the most prominent early expressions of the ancient astronaut thesis occur in a fictional context. A variation of the idea is expressed in the Cthulhu Mythos of HP Lovecraft, and featured most prominently in At the Mountains of Madness. (Some sceptics have claimed that Lovecraft’s fiction is the progenitor of all paleocontact theory, an excessive, but not entirely unwarranted notion, considering Lovecraft’s influence on The Morning of the Magicians, and the strange prominence given in his art to ancient, Cyclopean architecture.) Nigel Kneale’s brilliant 1958 BBC television serial Quatermass and the Pit hinged on the notion that the human race was a product of genetic manipulation carried out in pre-history by a race of intelligent, locust-like aliens hailing from the then habitable Mars. Viewers in the conservative Britain of the day must have been too entertained to notice the casual blasphemy implied by such a scenario. 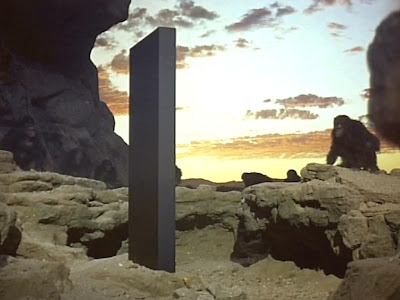 Finally, it is worth noting that the most iconic of all sci-fi films, 1968’s 2001: A Space Odyssey, is a classic paleocontact narrative, a fact sometimes obscured by Kubrick’s opaque treatment of higher alien intelligence. Apparently, Kubrick and Clarke had initially envisioned the intervention of far more prototypical humanoid ETs during the infamous Dawn of Man sequence. In his book The Cosmic Connection, Cark Sagan claims that he advised the pair against such an obvious anthropomorphic visualisation, arguing instead that they should imply or suggest alien superintelligence rather than depict it directly. However it ultimately came about, Kubrick arrived at a masterstroke, and the Monolith – the buzzing, transcendent object at the beginning and culmination of man’s cosmic journey – remains one of the simplest and most richly suggestive mythic images in contemporary pop culture. 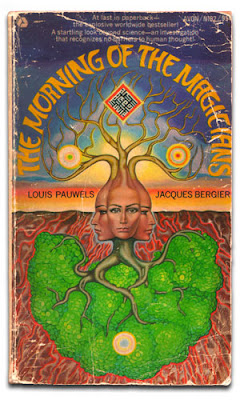 Meanwhile, a small number of writers in the far fringes of professional scholarship were positing ancient astronaut intervention as a legitimate historical possibility. The first of these was probably Charles Fort, who suggested in a famous aside from the Book of the Damned that human beings might be little more than the livestock of an advanced alien race: “I think we’re property.” The first fully realized expression of the meme occurred in Louis Pauwels and Jacques Bergier’s classic surrealist/Fortean manifesto Le matin des magiciens (The Morning of the Magicians, 1960). While these writers operated strictly outside the cultural mainstream, some variant of this kind of thinking has occasionally crept into the world of respectable science. During the 70s, Francis Crick, co-discoverer of the structure of the DNA molecule (a discovery facilitated, accorded to popular legend, by the ingestion of LSD), speculated that intelligent life may have been artificially dispersed across the universe via advanced space travel technology in a process which he called “Directed Panspermia”. The Austrian astrophysicist Thomas Gold proposed a theory that would doubtless have appealed to the cosmic misanthropy of HP Lovecraft: according the “garbage theory”, life on planet earth may have evolved accidentally from a pile of waste dumped here by advanced extraterrestrials. Those of us of slovenly habits are well aware of the potential of waste to breed Lovecraftian colonies, particularly during the warmer months.

It was, however, the work of Erich von Daniken that really established the ancient astronaut thesis as a bona fide pop culture phenomenon and contemporary folk mythology. It didn’t matter that von Daniken was a dubious character who would eventually be convicted for several crimes including theft and fraud, or that he had plagiarised most of his ideas from Morning of the Magicians, much less that his scholarship was negligible and his writing crude and overbearing. He had the good fortune to be in the right place at the right time, with a killer title: CHARIOTS OF THE GODS?, released the same year that Kubrick’s revelatory Monolith was buzzing in movie-theatres, was a massive bestseller that captured the public imagination. Like 2001, Chariots of the Gods? suggested a visionary activation of the collective ancestral memory banks, a sense whereby the true nature of humankind was being revealed through a proper recollection of its distant past. Chariots prompted a slew of imitations, some better and many worse, and a vast body of ancient astronaut literature emerged, sometimes crudely literalistic, sometimes risible, and occasionally intriguing and strangely persuasive. The astronauts and shamans of 60s television – William Shatner, Leonard Nimoy, and Rod Sterling – returned to narrate documentaries that dazzled young viewers with vistas of ancient Mayan and Aztec architecture turning full circle to meet the Space Age technologies of the previous decade. The ancient astronaut became an integral part of the weird, post-psychedelic mindscape of 70s popular culture: 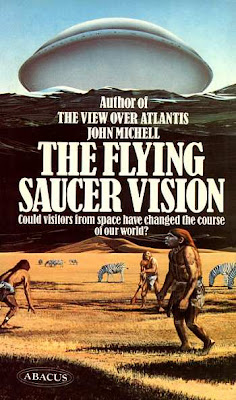 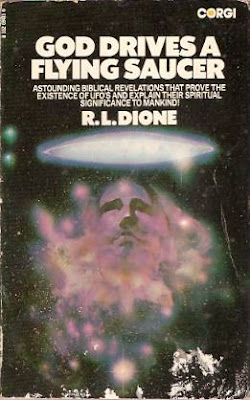 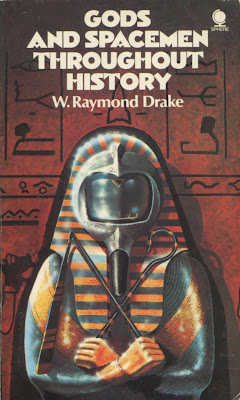 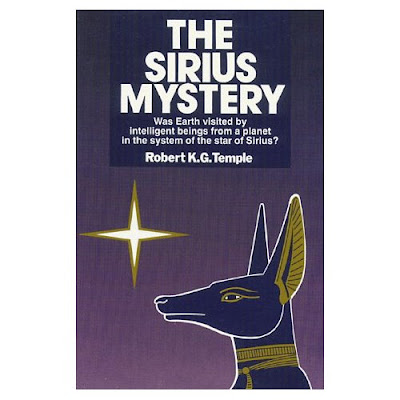 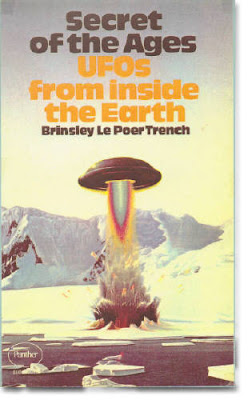 To be continued.
Posted by Tristan Eldritch at 3:32 PM

Although I detest the ancient astronaut idea, I found your article to be very well-executed; it was interesting and rather comprehensive.

It seems to me, the idea has somehow agglomerated into all things to all people. Mystics, gnostics and 'end is nigh' squealers have taken the possibility to heart. The 'UFO community' likewise never miss an opportunity to press-gang any unknown into the service of visiting ETs. Medieval art? Aliens! Paleolithic rock art? Aliens!

Human achievements are blithely tossed aside in favour of mystification; ignorance is re-branded as 'open-minded.'

Using your sci-fi as an example, the works of authors like Iain M Banks or Asimov are evidence of the sheer scope of human imagination. We can conceive of so much and yet not the possibility that ancient humans could conjure up the rule of law or trial-and-error their way towards grand architecture.

Nope. It's always those bloody aliens getting the credit by folk who apparently never read sci-fi, history or archetypes in mythology.

Hey Kandinsky, thanks for your kind comments. I'm inclined to agree with much of what you say, and the logic of limited human capacity and ingenuity is also one that afflicts people who cannot conceive of human beings being capable of producing prettily designed crop circles overnight.

That said, I think the argument you make regarding sci-fi is less clear cut. The further back one goes, the less clear-cut the idea of "fiction" becomes - and it becomes more difficult to untangle real history and real convictions about the nature of the world from what is deliberately imaginative or allegorical in nature. The audiences to the Sumerian or Homeric myths regarded those myths in a very different fashion to that which we regard Middle Earth or Star Wars - and much of our our fantasy literature is infused with a nostalgia for the mythic consciousness that produced those types of stories in the first place. There is still, I think, much mystery regarding the old myths - and even a skeptic like Carl Sagan found the consistency of the Oannes myths intriguing - but, needless to say, there are also many possibilities other than ancient aliens implied by these mysteries.

I would suggest that one of the reasons why the ancient astronaut thesis is so appealing to people is that, like the old myths themselves, it facilitates a blurring of the lines between our cultural imagination and how we regard the world to actually be. Much of the UFO mythology is like this - it is a kind of lived sci-fi.

While I view the assertions and conjectures often presented in the
Ancient Astronaut Series seriously flawed and sometimes laughingly absurd, I think there are non-the-less legitimate questions regarding our origens that are worthy of serious investigation.

Gobekli Tepe is a fascinating glich in the accepted history of the development of mankind pushing the history of monumental building back centuries before thought possible.

So I don't don't discount discoveries that will upset the proverbial applecart of accepted wisdom, but I don't look for them to come from a television series with some questionable experts expounding on nonsense that they hope will sell their books.

Enjoyed your take as usual Tristan.

Hey Mike. I haven't seen too much of the Ancient Aliens series, but I find the format of those shows hilarious: the more or less constant barrage of leading questions from the narrator! Pure infotainment, kind of fun if you're in the right frame of mind. Thanks for bringing Gobekli Tepe to my attention, that's fascinating!