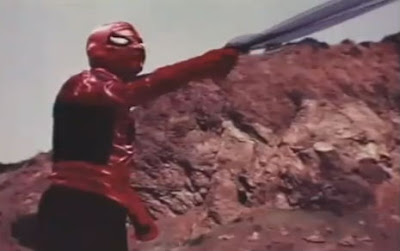 According to his wikipedia entry, Donald F. Glut is a man of varied artistic talents and interests - writer, director, amateur paleontologist, musician, and actor. Somewhat of a peripheral figure in the history of fantastic cinema - writing credits include the novelization of the Empire Strikes Back - Glut is nevertheless a legend in the realm of amateur film-making. In 1969, he directed and starred in what is surely the first ever fan-made Spiderman movie. I can't stop watching it - it has the mixture of earnest, infectious resourcefulness and abysmal awfulness that makes for classic outsider art:

Found at dangerous minds
Posted by Tristan Eldritch at 11:59 AM