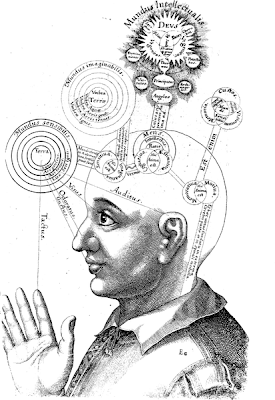 The third key can be found under the soles of your shoes....
Varelli, in Dario Argento's Inferno (1980).

We owe our scientific knowledge of the world to certain habits, predilections, and assumptions which are hard-wired into the human psyche. These include the recognition of patterns, an acute sensitivity to structure, order, and harmony, and an utterly incorrigible addiction to mysteries and puzzles of every kind. Paradoxically, these same intuitions and habits of mind underlie the kind of ideas that are most repugnant to contemporary rationalists and practitioners of scientism. The mainstream of rational discourse espouses the particular varieties of pattern recognition which have been sanctioned by the scientific method. Meanwhile, just as individuals ascribe mystical properties to personal experience of coincidence, the folk/pop culture imagination revels in the contraband logics offered by conspiracy theories and cabalistic codes of every imaginable kind. Though these divergent ways of viewing the world appear antithetical to one another, they arise out of the same essential wellsprings.

Conventionally, it is reasoned that while scientific theory and paranoid delusion do indeed emerge from the same source, the former is measured for accuracy against evidence, while the latter remain faulty products of an excess in the human proclivity to connect and organise disparate phenomena. The scientist is a moderate drinker, carefully selecting the wines that accompany his wholesome repast; the paranoid seer, on the other hand, is completely intoxicated by a sea of connections and patterns that are all of his own invention.

It seems like a clear, easy distinction to make, but in practise the line between healthy moderation and inebriation is ever a fine one to traverse. Johannes Kepler once famously described the rapture he felt at the development of his theories regarding planetary motion: "I yield freely to the sacred frenzy; I dare frankly to confess that I have stolen the golden vessels of the Egyptians to build a tabernacle for my God far the bounds of Egypt. If you pardon me, I shall rejoice; if you reproach me, I shall endure. The die is cast, and I am writing the book - to be read either now or by prosperity, it matters not. It can wait a century for a reader, as God himself has waited six thousand years for a witness."

Kepler's notion of "sacred frenzy" alerts us to the ever close proximity pertaining between illumination and mental collapse, between the refinement of logic and hermeneutics on the one hand, and their implosion into paranoiac excess on the other. These states of mind appear to occupy adjourning buildings in the same district, which Robert Anton Wilson has labelled the Chapel Perilous, and the popular imagination often visualizes as the tumble down Carroll's Rabbit Hole. The following are some cryptic street-signs that may guide the unwary traveller on his way to this eclectic district..... 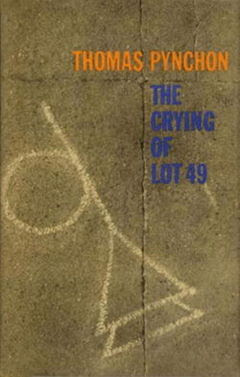 Toynbee Tiles.
Thomas Pynchon's novel The Crying of Lot 49 basically charts the initiation of its protagonist Opedia Mass into the existence of a possibly all-encompassing, possibly delusionary conspiracy. The chief spur to her initiation is the discovery of a symbol - the iconic muted post horn with one loop - literally everywhere in the Californian landscape through which she moves. We find a fascinating real-world analogue to Pynchon's post horn in the form of the Toynbee tile. Roughly the size of an American license plate, and thought to be made of linoleum and asphalt crack-filling compound, Toynbee tiles have been discovered underfoot in two dozen major cities in the US, as well as four capitals in South America. In some respects, these mysterious tiles might qualify as a modest urban equivalent to the crop circle, albeit with a major difference both in scale and focus. While the circles have alluded to a whole slew of concepts and ideas, Toynbee tiles simply reiterate slight variations of the following cryptic expression: TOYNBEE'S IDEA, in Kubrick's (or Movie) 2001, RESURRECT DEAD ON PLANET JUPITER. 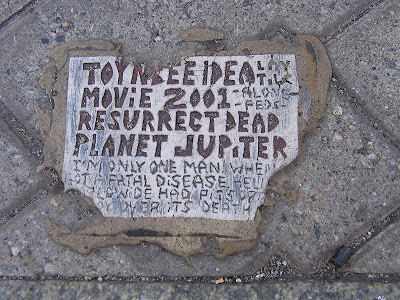 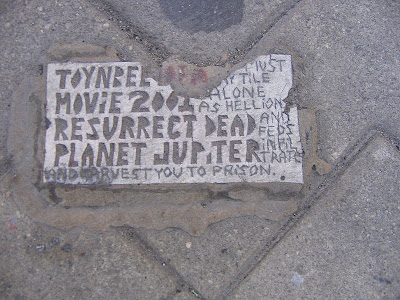 On the face of it, the tiles don't seem either miraculous or even particularly mysterious. They would appear to be the work of either a marginal crackpot, who genuinely believes that some correspondence between the works of historian Arnold J. Toynbee and the movie 2001 allows for the possibility of mass resurrection of the dead on Jupiter; or the work of a more self-conscious, surrealist street artist who composed the odd juxtaposition of elements merely to screw with our heads. However, an attempt to discover the elusive author of the tiles, and the specific origin of the Kubrick/Toynbee/Jupiter juxtaposition, leads us into a very puzzling hall of mirrors indeed. Enter dramatist, film-maker, and Zen master of muscular, stylized dialogue, Mr. David Mamet. 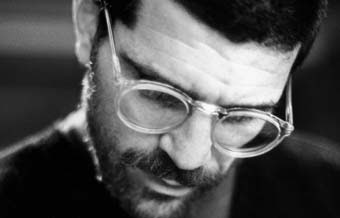 Speaking to the website Suicide Girls in 2007, Mamet had the following to say about curious instances of flattery:
"This is the weirdest thing that ever happened. I wrote this play about a million years ago that was a homage to Larry King when he was a late night talk show host on the radio in the 70s. A guy calls in and he's talking about the film 2001 based on the writings of Arnold Toynbee. The Larry King character says I think you'll find that 2001 is based on the writings of Arthur C. Clarke. The guy says No Larry, I believe you're wrong there. 2001 based on the writings of Arnold Toynbee tells us that all human life will be reconstituted on the planet Jupiter. They had this rather silly conversation for about ten minutes. It turns out that now you can go on the internet and look up Toynbee tiles. There are these tiles that are showing up all over the country that say in mosaic: Toynbee says all life reconstituted on Jupiter".

It is clear from the interview that Mamet believes that he originated the Kubrick/Toynbee idea (in his short vignette 4 A.M. written in 1983, and published in the collection Goldberg Street: Short Plays and Monologues in 1985), and the tiles themselves constitute a bizarre tribute to his imagination. Which would, once again, all make perfect sense - except that, under closer analysis, the existence of 4 A.M. only complicates the mystery further.
James Morasco and the Minority Association.
In March of 1983, the same year Mamet wrote 4 A.M., a Philadelphia Inquirer staff writer named Clark DeLeon penned a short human-interest piece about one James Morasco, a local eccentric who headed up a Philly-based organisation called the Minority Association. The piece, entitled Theories: Wanna Run That One By Me Again?, begins:
"Call me skeptical, but I had a hard time buying James Morasco's concept that the planet Jupiter would be colonized by bringing all the people of Earth who had ever died back to life and then changing Jupiter's atmosphere to allow them to live. Is this just me, or does that strike you as hard to swallow too? Morasco says he is a social worker in Philadelphia and came across this idea while reading a book by historian Arnold Toynbee, who's theory on bringing dead molecules back to life was depicted in the movie 2001: A Space Odyssey".

So, if this second datum is correct, and Mamet is sincere in the interview, then we have the peculiar presentiment of two individuals, one an established playwright and the other an obscure eccentric, both hitting in 1983 on the idea of combining Toynbee, 2001, and Jupiter into a conspiracy theory. We have a playwright creating a fictional crank with a particularly incongruous and unlikely belief system, and an actual crank in Philadelphia espousing that very belief system to a journalist. There is something distinctly tricksterish in this whole business. Recently, researchers who are putting together the "Resurrect Dead" film about the phenomenon have added yet another layer to the onion, claiming to have uncovered evidence that in 1980 the elusive Tiler made a late night phone call to - you guessed it, Larry King. Tentatively ruling out (for the moment) some exotic Jungian explanation, it would seem that the tiles, play, and idea all derive from a common source. But where?

The only James Morasco in the Philly phone book turned out to be a carpenter from the Chestnut Hill district. He passed away in 2003, and his wife insists that he had nothing to do with the tiles. Some rumblings have been heard of an unnamed "Street Prophet" who hung around the Centre City district in the 80s, frequently heard to "babble" about Kubrick, Toynbee, Clarke, and the promise of resurrection on Jupiter. Coincidences continue to swirl around the Toynbee tiles. Arthur C. Clarke published a short story in 1953 called Jupiter Five, which involves one of the Jovian moons turning out to be an artificial construct created by reptilian aliens; it contains several references to Arnold Toynbee. Among the more recent fever dreams of the Posthumanists is the "Jupiter Brain": "a brain approximately the size of Jupiter. The Transhumanist Terminology defines a Jupiter Brain as A posthuman being of extremely high computational power and size. The term supposedly originated due to an idea by Keith Henson that nanomachines could be used to turn the mass of Jupiter into computers running an upgraded version of himself." I only raise this because one of the wilder ideas mooted in Posthumanism is that super-computers such as the Jupiter Brain could potentially resurrect every human who has every lived, and allow them to live forever in a simulated environment.
So what really gives with the Toynbee tiles? Did Mamet consciously poach the idea from the Philadelphia Inquirer? Or did he hear the Tiler call Larry King back in 1980, forget about it, and subsequently incorporate the main ideas into his tribute to King without remembering the source? Did Mamet walk over a Toynbee tile and unconsciously record its contents, thus becoming an unintentional spokesman for the bizarre ideas of the Tiler? Or was some beacon in the Collective Unconscious beaming out a signal in 1983.....Toynbee......Kubrick.....Jupiter......a message that found a home, as in the stories of Lovecraft, in the dreams of the creative and the unhinged? Keep watching the skies.......and the ground. 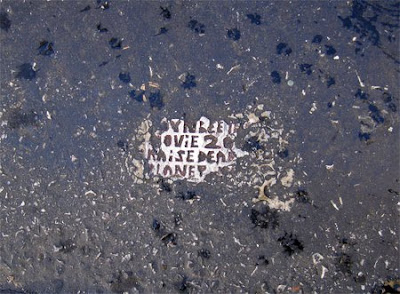 (The full text of Mamet's very brief 4 A.M. can be found here, and is well worth a look.)
Posted by Tristan Eldritch at 3:14 PM

I have touched the tiles.

I suspected as much - you're a man ever in close proximity to the Mysteries!

I'm not sure why that seems to be the case. In this instance, my son attended an art school in Philadelphia and on one of our visits he and I walked the city and we visited the locations he had identified. There is a real strangeness about the tiles. They seem to have been absorbed into the streets as though they were meant to be there all along.