Letters from Uqbar: The Castle, the Garden, and the Books. (Part 1) 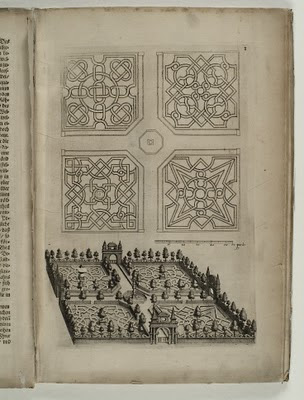 On the 24th of February, 1613, Frederick V, who would become the Elector of the Rhineland Palatinate on his 18th birthday, was married to Elizabeth Stuart, the daughter of King James I of England. The marriage, celebrated with the performance of two lavish masques, was largely one of political calculation and expediency - James I sought a strong Protestant union between England, the Palatinate, the Dutch House of Orange-Nassau, and Denmark. Nevertheless, a warm, affectionate relationship developed between the young couple; he was a Calvinist and mystic, and she an ardent admirer of the theatre, which could still claim a largely retired William Shakespeare among its living practitioners.

In June of that year, Elizabeth travelled with Frederick to Heidelberg Castle in the Palatinate. A year later, in honour of his new bride, Frederick commissioned the construction of a Baroque garden on the grounds of the castle, which came to be known as the Hortus Palatinus. This extraordinary and ambitious project was undertaken by two men - the British architect and stage designer Inigo Jones, who had conducted the first serious survey of Stonehenge, and the French engineer Salomon de Caus, a prodigious figure who is sometimes credited with the invention of the steam engine, and was reputed to be steeped in the Hermetic, alchemical underground of the period.
Bare descriptions of the garden and its contents suffice to engender a reverie, to evoke a strange but familiar dream. Situated on a large, multi-level terrace that formed a L-shape around the castle, and surrounded on its exterior by woodland, the garden was a labyrinthine masterpiece of horticultural design, architecture, and mechanical engineering. There were mazes, grottos, and statues, including an animated statue of Memnon designed to emit a mechanical sound when the sun's rays struck it; there was a water organ modelled on that of the classical Roman author Vitruvius, coupled with exotic fauna imported from the freshly discovered tropics; the songs of nightingales and cuckcoo's joined the garden's uncanny chorus of sound, emitted by clockwork automata birds. Writing in The Rosicrucian Enlightenment, Francis Yates suggests that the Hortus "must have made Heidelberg as 'full of noises' as Prospero's island." 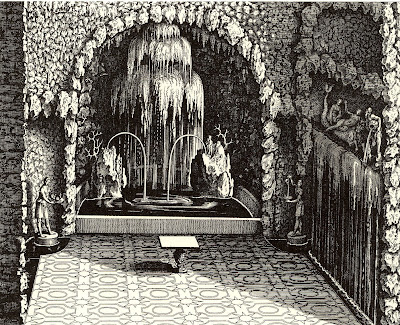 The intuition of the Gothic literary school is inescapable: all landscapes are mental landscapes. All environments are mediated through our subjective mental processes. The landscape informs our thoughts and moods, and in a subtle, indivisible act of reciprocity, our thoughts and moods inform our experience of the landscape. This process becomes more pronounced and complex in relation to man-made environments; these we can envision as the externalisation of interior mental states, as an architecture of ideas, moods, and unrealized desires and dreams.

Such ideas would have appeared perfectly natural and sound to the consciousness of the late Renaissance period in which the Hortus Palatinus was constructed. This was a consciousness which was steeped in allegory, in the visual embodiment of ideas and mental states as symbols and avatars, and in the notion of the world itself as a carefully designed allegorical landscape. It has been widely theorized that the gardens of Heidelberg were conceived as a grand hermetic treatise, a "botanical cosmos" into whose architecture had been coded the emblems of an ancient tradition of hidden knowledge. By this logic, the Hortus Palatinus was an attempt to emulate the harmony believed to pertain between macrocosm and microcosm, to map out the contours of the cosmos and its mirror image in the divine spark of human imagination. Time has rendered the garden, its mechanical marvels and mathematical harmonies largely a creature of the imagination, and it is there we will leave it for the moment, to consider other matters.

Between the years of 1607 and 1616, there appeared in Germany two anonymous pamphlets which have cast minor but persistent ripples ever since: the Fama Fraternitatis Rosae Crucis and the Confessio Fraternitatis. These manifestos expressed themselves for the most part in a mode of strident Protestant apocalyptic, calling for a "Universal Reformation of Mankind". Underlying their political message, however, the manifestos claimed to derive from a secret fraternity of illuminated philosopher/mystic/doctors. This tiny band of illuminates claimed to possess a "Pansophia", or universal, all-encompassing wisdom, which they had derived from their founder Frater C.R.C. (Christian Rosenkreutz), and passed on from generation to generation. In 1616, the two manifestos were joined by an allegorical romance called the Chymical Wedding of Christian Rosenkreutz, which details the events of a heavily symbolic wedding in a castle of mazes, miracles, and wonders. Thus, while Jones and de Caus were overseeing the construction of the Heidelberg gardens, somebody was trying to propagate a belief in the existence of an Invisible College of alchemists and social reformers.

To understood the substance of the Rosicrucian manifestos, one must conceive of a period where the sciences as we understand them today were emerging in tandem with a massive resurgence of antique, esoteric traditions. Though always constituting a small minority, a recognisable type had emerged: a Christian mystic with an obsessive, all-consuming passion for esoteric knowledge. The esoteric aspect of his mental existence constituted those disciplines and habits of mind which are now called occult: alchemy, Cabala, the magical Hermetic texts attributed to Hermes Trismegistus, and, underlying all else, an incorrigible belief in a perennial wisdom transmitted through the ages by a tiny band of initiates. This great tradition of Renaissance syncretism was palpably on the wane in the period we are discussing, but in its twilight years it had become an underground network. The primary fruits of this network were a series of illustrated manuscripts, whose enigmatic texts and alchemical emblems and iconography form a landscape as evocative and uncanny as the groves of the Hortus Palatinus. 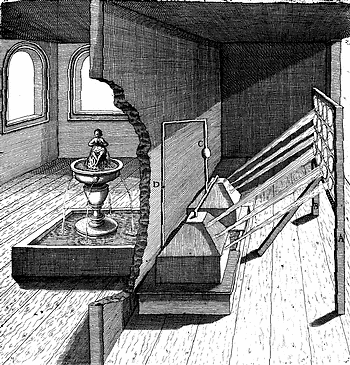