Crashing through the Moonset. Conclusion. 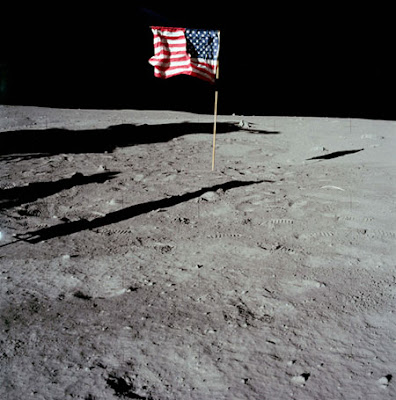 For whatever reasons, ideas of theatricality and fakery have hovered over the Apollo 11 landing from the very beginning, with some suggesting that Hollywood operated as a subtle whistle blower to the deception. The first significant AHT book, We Never Went to the Moon: America's Thirty Billion Dollar Swindle by Bill Kaysing, was released in 1974. However, three years earlier, United Artists released Diamonds are Forever, the seventh James Bond film. (Amusing trivia: actor Michael Gambon was considered for the role of Bond, but apparently told producer Albert R. Broccoli that he was “in terrible shape” and had “tits like a woman.”) For the most part, it was business as usual for Bond, albeit with a cruder and campier tone than previous outings. However, upon infiltrating the villain's lair in the Nevada dessert, Bond wonders into the middle of a peculiar rehearsal:

The scene is made all the more weird by the fact that it has no particular relevnace to the overall plot, and isn't really referred to again. However, if Diamonds are Forever was a subtle, blink and you miss it anomaly, Hollywood went into full whistle blower mode in 1978 with the release of Peter Hyams' Capricorn One, a fast-paced conspiracy thriller in which a journalist (Eliot Gould) discovers that a highly publicized live landing on the surface of Mars is a hoax. If I've seen Capricorn One at all, its so long ago that the memory completely escapes me. Watching the trailer, though, its hard not to be struck by how explicitly the movie plays on memories of the Apollo landing:

Indeed, the whole trailer, with its pointed suggestion that mediated history-in-the-making could be wholly fabricated by a ruthless and shadowy conglomerate, is stunningly subversive. Notice particularly the shattering reveal at about 1:09, accompanied by a voice-over which echoes almost word for word the title of Bill Kaysing's 1974 book. (Note also the fact that Capricorn One astronaut OJ Simpson would later stage his own considerable coup in the blurring of the lines between staged spectacle and real-time news.) In his Space Review essay Little red lies, Dwayne A. Day places Capricorn One neatly in the historical context of post-Watergate paranoia in which AHT would continue to flourish:
“Capricorn One is the kind of movie which can only be appreciated if you consider the period that it was made, most notably in the years following both Vietnam and Watergate. Peter Hyams had worked as a journalist in Vietnam, where he became convinced that the government would conceal a big lie if top officials wanted to do so. After all, Nixon had waged his “secret war” in Cambodia. Later revelations, such as the Church and Pike congressional investigations which revealed CIA plots to overthrow governments and kill Castro with exploding cigars and poisoned wetsuits only added to the anti-government paranoia. The movie reflects not only distrust of government, but also features the crusading journalist as hero; All the Presidents Men, about Woodward and Bernstein and Watergate, had already been a hit movie two years earlier.”

I remain very reluctant to believe that the moon landings were hoaxed. However, as a resonant contemporary mythology, AHT has a hell of a lot to tell us about our contemporary condition. About our prevalent distrust of official histories, figures of power and authority, even the evidence of what our eyes can see. The lunar footage itself, which appears alternately awe-inspiring and strangely comic, otherworldly and theatrical, reveals the Janus face of technology: its ability to produce an inalienable record of an event, tempered with the awareness of its potential to produce a near perfect fabrication of an event; the inevitable failure of filmic representation to approximate the certainty of experience and reality, when the two, as opposing forces, seem only to deplete one another's potency.

“Just a month before, Apollo 11 astronauts Buzz Aldrin and Neil Armstrong had left their colleague Michael Collins on-board spaceship Columbia and walked on the moon, beating by five months president Kennedy's goal of putting a man on the moon before the decade was out. The old carpenter asked me if I really believed it had happened. I said sure, I saw it on television. He disagreed; he said he didn't believe it for a moment, that “them television fellers” could make things look real that weren't. Back then I thought he was a crank. During my eight years in Washington, I saw things on television that made me wonder if he wasn't ahead of his time.”
Bill Clinton.

Posted by Tristan Eldritch at 10:01 AM