Entry 6: Elves and Eschatology Part 4: The Theology of The Ejector Seat. 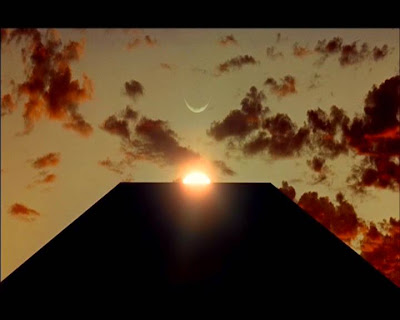 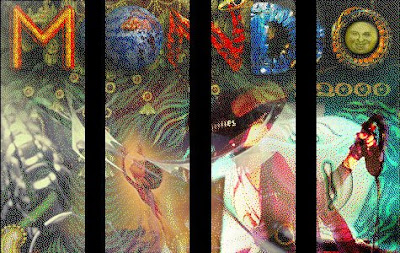 In some ways, I like to see some of these as examples of drop-outs from the Darwinian evolutionary struggle. It seems that there are rewards systems that are built into our brain chemistry – they reward success (it feels like cocaine) and social approval, or at least acceptance. I like to think that certain dropped-out groups in human history have discovered a different reward system that is also somehow built into the human system – one that might be related to a mind-opened engagement with experience itself. Or it might simply be related to the absence of stress from refusing to participate in whatever rat race was particular to that culture.

In the early eighties, Ken Groffman was an aging former Yippie, occasional musician, and proto-slacker. Closely affiliated with Timothy Leary and the old guard of the psychedelic movement, Groffman was destined to fade into muddled anachronism like one of the denizens of Pynchon’s sixties hang-over novel Vineland. Nevertheless, for a brief period in the early nineties, his brainchild Mondo 2000 became become an essential zeitgeist primer for both the initiate and the neophyte, bringing its fractal melting pot of cutting edge technology and glib subversion from the fringes of Californian cyberdelia to the cover of Time magazine. Described by Mark Dery as a “heady blend of gadget pornography, guerrilla humor, human potential prep talk, New Age transcendentalism, and libertarian anarcho-capitalism”, Mondo and its adherents, labeled Mondoids, perfectly encapsulated an era in which the utopian imagination went into giddy overdrive. At some point in the course of this brief apotheosis, Groffman adopted the surrealist moniker by which he is still known today: RU Sirius.

In a more recent interview on Daniel Pinchbeck’s Reality Sandwich website, Sirius argued that information technologies have always produced unreservedly utopian projections and fantasies: “People were predicting the emergence of a global humanity and the breakdown of boundaries and nation states and all those sorts of things following the invention of the telegraph. Thomas Friedman wasn’t even yet an arrogant little spermatozoa in his daddy’s reproductive system when visionaries first imagined that global communications could or should result in a sort of global culture – and some of them expected it all to happen very quickly and suddenly.”

The reasons that this kind of techno-utopianism reached such a critical mass in the nineties are complex and varied. To a vital degree, the conception of how human beings interact with technology had undergone a rigorous transformation in the last few centuries. One of the most potent mythical images of the twentieth century remains the famous jump-cut in 2001 in which our ancestral bone-cudgel takes flight, and morphs into a space craft of the far future. The grey monolith corresponds to some degree with the Promethean myth with appears in virtually all the ancient traditions, but Clarke’s variation is infused with a new awareness of the extent to which human evolution is inherently a product of tool-making and interaction with technology. In previous word-views, characterized by a conception of human identity as an immutable, miniaturized fractal of the divine mind, technology was utilized in a largely naïve, unselfconscious fashion, and regarded as a by-product and extension of god-given human ingenuity. The scientific revolution radicalized our conception of the mechanical, and to some degree eroded forever the conceptual boundary between the organic and the inorganic. Marxism asserted that human nature was not a creation of some divine and immortal play-doh, but rather a product of material circumstances, of tool-making and modes of production. These represented sea-changes of outlook which have brought us gradually to the condition of techno-fetishistic cyborg consumerism which we inhabit today.

Human cultures have traditionally regarded consciousness as a unique, semi-magical animating principal, set in opposition to that which is mechanical, inorganic, or subject to computable, deterministic necessity of any kind. Automatons of every description maintain to this day a profound air of uncanny dread and revulsion, which probably achieves its apotheosis in the fairground carousel’s nightmarish parody of horse-riding. However, by the middle of the twentieth century, when the metaphor of mechanism had become an increasingly common tool to describe both the cosmos and the human body, something new happened: a kind of born again love for the machine inculcated itself into the fringes of human culture. A whole plethora of art forms, particularly electronic music, began to actively fetishize and celebrate the artificial and the inorganic. Science fiction writers instigated a fascination with the idea of human-surpassing robotic intelligence, and soon the quest for ever more powerful Artificial Intelligence would become a scientific reality, and a modern alchemical quest with both utopian and dystopian qualities. In 1997, chess world champion Garry Kasparov was defeated by IBM’s Deep Blue computer, and with him, something of the indomitable spirit of Ned Ludd.

Towards the end of the century, a new kind of self-consciousness existed regarding the evolutionary potential of the human/technological matrix, and the idea of technology as a transformative and potentially transcendent entity began to spread with an almost religious fervor. As early as the sixties, Arthur C. Clarke eagerly anticipated a future of uninhibited, uninterrupted pleasure, facilitated by technologies of god-like intelligence: “In one sense…History will have come to an end….It may be that our role on this planet is not to worship God - but create him. And then our work will be done. It will be time to play.” In the eighties, science fiction writer Vernor Vinge introduced the concept of the Singularity, a technological variant of Terence McKenna’s more overtly mystical novelty explosion theories. The Singularity basically suggests that at some point in the near future, machine intelligence will exceed that of its biological progenitor, and in so doing, attain the ability to produce exponentially improving versions of itself. As Vinge writes: “In the last few thousand years, humans have begun the next step, creating tools to support cognitive function. For example, writing is an off-loading of memory function. We’re building tools – computers, networks, database systems- that can speed up the processes of problem solving and adaptation. It’s not surprising that some technology enthusiasts have started talking about possible consequences. Depending on our inventiveness- and our artifacts inventiveness- there is the possibility of a transformation comparable to the rise of human intelligence in the biological world.”

Evolution, whose reigns have now been fully transferred from the bio to the technosphere, will spiral outward at terminal velocity, in a domino effect of novelty which, like McKenna’s singularity, is far beyond our current ability to conceptualize. Naturally, for adherents of the Singularity, who await its arrival like the Kingdom Come, the changes wrought will be overwhelmingly positive: many speak of a “Technotopia” in which aging, disease, and all negativity could potentially be eradicated by super-adaptive cyborg intelligence. The concept of the cyborg is vital; Singularity theory is permeated with a longing to absolutely blur the distinction between human and mechanical intelligence, and between biological “meatspace” and the realms of robotics, nanotechnology, and digital simulation. According to Ray Kurzweil, renowned futurist and author of key Singularity text The Age of Spiritual Machines, “in this new world, there will be no clear distinction between human and machine, between real and virtual reality. We will be able to assume different bodies and take on a range of personae at will. In practical terms, human illness and aging will be reversed; pollution will be stopped; world hunger and poverty will be solved.” Literally and figuratively the deus ex machina to end them all, cyber-critic Mark Deary has skeptically labeled this kind of thinking the “theology of the ejector seat.”

Out of these perennial longings to transcend the biological, entropic limitations placed on the human imagination by nature, the Transhumanist movement has emerged. The various Trans- and posthumanist ideologies eagerly adopt the assertion of Nietzsche that humanity must be regarded as a crude launching pad to better things, and infuse this basic doctrine with the modern jargons of cybernetics and the corporate self-actualization craze. As all these heady ideas permeated the computer/psychedelic/New Age matrix of nineties , no periodical encapsulated the delirious energy and deep-rooted contradictions inherent in this intellectual melting pot better than Mondo 2000.

Mondo was a long time in the making. Shortly after the assassination of John Lennon, Sirius took an intense acid trip which assured him of the “all-rightness of everything”, and infused him with a mission to leave the sixties behind, and embrace the radical potentials of the contemporary zeitgeist. He became aware of the cyberpunk fictions of Gibson, Bruce Sterling, and John Shirley, and the growing excitement surrounding the development of computer and virtual reality technologies. His first periodical, High Frontiers, was published out of the back room of ’s Flash Back Pizza restaurant. With a perpetually high staff of surrealistically named co-conspirators, including “Somerset Mau Mau”, “Amalgam X”, and Art Director “Loud Nose”, the magazine impressively averaged about an issue a year. The Flash Back, allegedly involved in minor drug trafficking, was also notoriously slow with its pizzas.

At an 1884 equinox party held by an archdruid in , Sirius arrived with the premier issue of High Frontiers under his arm. He met a woman named Alison Kelly at the party. In his own words: “She was talking about how she had been irradiated over in , because she was living right next door to the Russian embassy. She had been irradiated and poisoned, she was sick and dying, and she was smiling from ear to ear. I immediately fell in love with her because she was so strange. She was also the prettiest woman at the party. I said “Lets go take some drugs” and it went from there.” Kelly was the wife of an eastern religion professor at UC Berkley, and a minor heiress of a wealthy family. When Mondo finally emerged in 1989, Kelly had been rechristened Queen Mu, Dominatrix, and was a frequent contributor, as well as the chief financier of the magazine.

To be concluded next post.
Posted by Tristan Eldritch at 6:18 PM

I may be mis-reading the article but I didn't think that the jump cut in 2001 suggested techno-fetishism or the ascent of the primacy of machine intelligence; rather that the progress of tens of thousands of years did not amount to much in the grander scheme of things. Dave is dependant on HAL and unable to cope in space without the cumbersome tools that technology has supplied.

The Star Child could then be conceived as a new evolutionary jump - one that removes the cumbersome medium of technology leaving them in more immediate contact with the universe. A refutation of techno-fetishism.