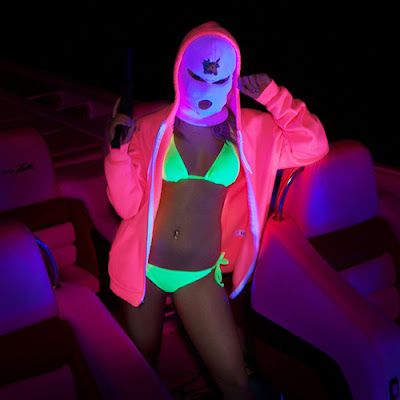 In one of several eye-catching sequences in Spring Breakers, James Franco’s grotesque, silver-toothed would-be gangsta Alien preforms a heartfelt cover of the Britney Spears’ ballad Everytime against a gorgeous Florida sunset.  Franco is accompanied in the sequence by three gun-toting young women clad in in bikini tops and pink balaclavas that almost melt into the textures of the sky.  (This, by Godard’s frequently quoted adage, is three times the bare requisite for a serviceable movie.)  The audience at the screening I caught (half of which appeared to be expecting a completely different movie) exploded in loud guffaws, which was a perfectly reasonable response to the scene’s comic juxtaposition of schmaltz and oddball subversion.  However, in an odd sort of way, I think the scene, and the movie as a whole, was designed to evince a certain sincerity behind the satire.  A strange, lop-sided poignancy can sometimes creep into bad pop songs, especially when heard in a certain mood or circumstance; the song tries too hard (and badly) to hit certain emotional notes, and yet all of us respond secretly from time to time to the little shivers of the spirit that occasionally emerge in the spectrum of trash and bad pop songs.  That would seem to be what Spring Breakers, as a Trojan horse art-film hidden in (but not entirely divorced from) the guise of a crass teen rites-of-passage flick, is primarily about: the desire to find a gleam of sincerity, even of spirituality, in the coded languages and left-overs of a culture beholden to trash.

There are various layers to Spring Breakers, and it’s probably not worth dwelling too long on the film’s initial bait and switch.  Casting squeaky clean teen idols like Selena Gomez and Vanessa Hudgens, coupled with a promotional veneer that suggested a more conventional take on teenage bacchanalia, was bound to cross a few wires – although why, in these information-rich and cash-strapped times, people don’t do a little research before investing in a theatre seat remains beyond me.  Harmony Korine wrote the script for Larry Clark’s Kids back in 1995, and has since developed a considerable and divisive reputation as a cinematic provocateur which somehow managed to completely pass me by until now.  I haven’t seen his 2009 VHS weird-out Trash Humpers, but the trailer would seem to imply that the title is more literal than metaphorical:

Obviously then, Spring Breakers wasn’t going to be another American Pie or Project X, but while there is a general agreement that it must be a subversive or deconstructive exercise of some kind, mileage has varied considerably with regard to the film’s merits and what, if anything, its narrative of girls gone wild is supposed to represent.  Spring Breakers loosely follows the structure of a coming of age/chick buddy/road-trip movie not unlike that of the 2002 Britney Spears vehicle Crossroads.  Four high-school friends Faith, Brit, Candy, and Cotty, are desperate to go on a spring break vacation, but find themselves perilously strapped for cash.  With the exception of Faith (Gomez), a religious girl who is more timid, austere, and contemplative than the others, the girls are difficult at times to differentiate, at least on a first viewing.  Interestingly, Korine has said that they represent the different aspects of a single entity, which would make Faith the superego (a positive or negative quality, depending on how you want to look at it) and the other girls various stages of the Id; various stages, again depending on how you want to look at it, of abandonment or greater authenticity.  These other girls in the group are energetic, boisterous, and hedonistic; like the old number says, they just want to have fun.  Early on, Faith articulates an important thematic strand of the film: the lure of spring break is not so much anything intrinsic to the event itself, but that it represents an escape from ordinary, everyday reality, which is repetitive, grey, and boring.  Later on, when their spring break dream becomes a reality after a couple of the girls stick up a restaurant armed with water pistols, Faith wishes that their exalted moment away from the greyness of ordinary reality could last forever, but the other girls are at this point keenly aware that spring break can’t last forever.  You have to go back to the less intense, less vivid, less ecstatic everyday world sooner or later.  In some respects, this echoes the dilemma of Phil Daniels’ Jimmy in one of the all-time great youth pictures, 1976’s Quadrophenia.  For Jimmy, the exalted, ecstatic moment where everything feels right is a bank holiday weekend Mod rally in the seaside town of Brighton.  When it’s over, however, he finds his problems have escalated rather than disappeared, and he has difficulty readjusting himself to the compromises and disappointments of everyday life.  The real world asserts itself like a fairy tale in reverse; he returns to Brighton and finds the ultra-cool Mod king Ace Face (Sting) transformed into an obsequious bellboy.  Unwilling to accept the adult world, Jimmy drives (or appears to drive) his scooter off a cliff-side.

In Spring Breakers, the girls briefly rent scooters, but never go so far as to drive them off cliffs.  Instead, their opportunity to reject the everyday world, and make spring break last forever, comes in the cartoonish form of would-be dope kingpin and gangsta rapper Alien (a barn-storming and already semi-legendary turn from the actor with more degrees than a thermometer, James Franco.)  At this point, the film’s relationship with reality becomes increasingly fractured; hitherto it had been realistic enough, albeit in an elliptical and poetically heightened fashion.  Another common escape route from grey and boring realities is provided by cultural fantasies, by the lure of certain specific images, lifestyles, and experiences which are dreamed up by artists and manufactured by corporations, and transmitted through the almost subliminal pulse of popular music and cinema.  (It occurs to me that one of the earliest depictions in cinema of the retreat into a cultural fantasy comes in the form of Jean-Paul Belmondo’s Bogie-obsessed hoodlum in A bout de soufflé; in literature we would have to go back as far as Quixote.)  Through Alien, the girls have moved into the semi-real, semi-fantastic realm of conspicuous consumption, violent crime, and streetwise authenticity which both underprivileged black and privileged white audiences have consumed since the mid-80s (and which exploded in the mainstream in the  90s) through various expressions of hip hop culture.  As the girls are drawn into this hyperreal fantasy world, which seems both dangerous and cartoonish, they begin slowly to return to the everyday world.  Faith, who had been most vocal and ardent in wanting spring break to last forever, is the first to go.  In a pool-hall scene, she evinces what appears to me to be an almost visceral dread of the predominantly black clientele; the movie’s  provocative and peculiar evocation of racial issues would require another viewing and a longer essay to fully explore.

Harmony Korine’s pop fever-dream has elicited markedly diverse interpretations.  I’ve seen some commentators label it toxic postmodern nihilism, and others recoil from what they perceived as a puritan or conservative streak in its depiction of youthful excess.  Much of this contentiousness derives from people’s desires to nail down precisely where Korine stands in relation to his characters and the spring break milieu in general; questions about which the director has developed an artful ambiguity, at least in my opinion.  It is a common view to regard Breakers as a skewering of materialistic American social customs and popular culture embedded in a form which normally celebrates such things.  There must be at least some degree of validity to this.  Korine depicts the heaving spring-break shenanigans in slo-mo beach tableaus which neatly capture the absurdity of excess by which similar imagery in pop videos teeters over into grotesquery.  Certainly, the movie’s sidelong glance into America’s dream-life, dominated as it is by guns (whether real, toy, or frequently mimed), money, and, in Lenny Bruce’s expression, tits and ass and ass and tits and tits and ass, is hardly a flattering one, and none of the characters, beholden to such a moribund dream world, emerge in a particularly flattering light.  However, if this were all the movie was attempting to say, it would appear not only a little pat, but also peculiarly dated.  Spring Breakers cultural reference points – the puritan shock of spring breaker girls gone wild, Scarface-aping gangsta rap culture, and Britney Spears – all have a conspicuous odour of the 90s about them.  I remember these things as having a particular cultural resonance when I was in school, and, if memory serves, there is only one reference to the internet in the whole movie.  Korine must to some degree be remembering the cultural ambience of his own youth rather than commenting explicitly on today’s generation, and it seems unlikely that someone who clearly indulged in hedonistic excess himself would be particularly keen to tut-tut at young people getting off, in however overwrought or moronic a fashion. 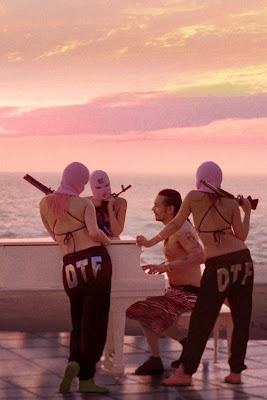 What is also striking about Spring Breakers is its underlying air of sentiment and tenderness.  The movie has borrowed much stylistically from Terrence Malick, and also seems to imbue its squalid milieu with that director’s gentle, dreamlike aura.  The film’s elliptical editing patterns are distinctively Malickian, and Korine also utilizes his actors in a manner similar to Malick: less as characters in a conventional sense, and more often as carefully posed physical presences that embody certain moods; dancers, almost.  Although his principal female actresses are rarely seen fully clothed, there seemed to me to be a marked lack of prurience in how the camera regarded them.  This is another odd thing about Spring Breakers; there is little or virtually no actual sex in the movie.  There are many nude bodies engaged in lascivious behaviour in the general melee of the bacchanal, but they always appear to be captured in a frenzy of preliminaries or symbolic gestures.  Alien, who first appears like a sexual predator, eventually becomes woozily romantic; the Wild Things-like threesome he finally engages in with two of the girls manages to maintain a kind of delicate, decorous air, to whatever degree a garish swimming pool threesome could.  I think the sentiment is probably as sincere as the satire.  Korine seems to regard his principal characters almost as innocents abroad in a derelict and debased culture; they long for ecstatic experiences that transcend the drudgery of the everyday, but the only materials their culture affords then to pursue these yearnings are absurd fantasies and empty, materialistic dead-ends.  In the same manner that these characters must fashion their dreams from such dudious materials, Korine's film attempts to make an ecstatic dayglo art-object out of pop junk.

Posted by Tristan Eldritch at 9:09 PM