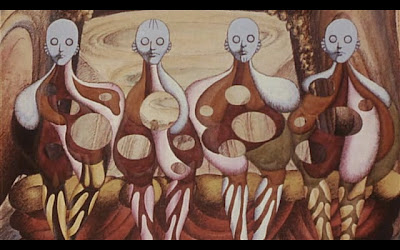 Following up the previous Moebius post with some more surreal French sci-fi, here is a (very) brief look at the 1973 Rene Laloux classic La Planete Sauvage.  It is a film that could ONLY have been made in the early 70s, and the same goes double for its trailer; I love how the super-anesthetized chick doing the voice-over sounds like she's been Quaaluded into a kind of 70s Stepford HAL:

Animation can be very hit and miss for me personally, but I have a real soft spot for this movie.  Its plot is a pretty intelligent and engrossing variation of the Prometheus myth, where earthlings have become the diminutive pets (when tame) and detested vermin (when wild) of a race of highly advanced blue humanoids called the Draags.  What really makes the film such a consistent and rewarding aesthetic experience, however, is its remarkable, surrealistic design sensibility.  This aspect of the movie was largely the brainchild of the intriguing French illustrator, actor, and novelist Roland Topor.  I came across Topor earlier this year when I watched Roman Polanski's deeply strange and macabre 1976 thriller The Tenant.  Topor wrote the source novel and I'd like very much to track it down; the film is fascinating, and may be Polanski's best.  Here is Topor and some of his artwork: 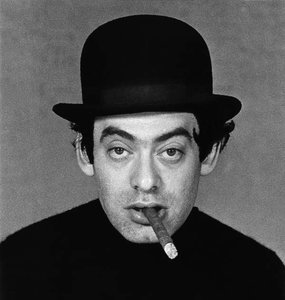 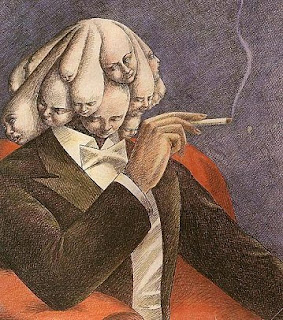 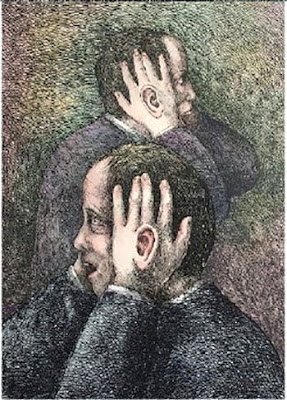 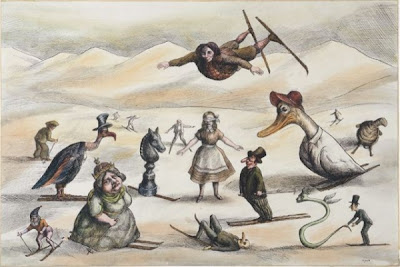 With its soundtrack and general mood dating it firmly in the weird post-psychedelic headspace of the early 70s, Le Sauvage Planete takes the viewer on a trip into the pictorial antipodes of the conscious mind, where we see forms which appear alien and inexplicable, and yet feel weirdly familiar and natural.  The imaginative boundaries of much popular animation today (Pixar, for example) is extraordinarily tame in comparison, considering the capacity of animation (and contemporary technology) to take us to truly otherworldly places.  I should say, though, I'm probably the only white person of my generation who doesn't love Pixar movies. 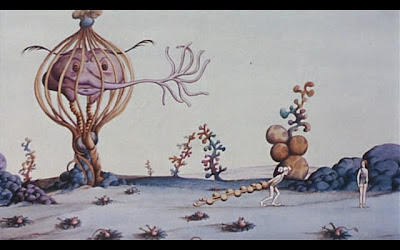 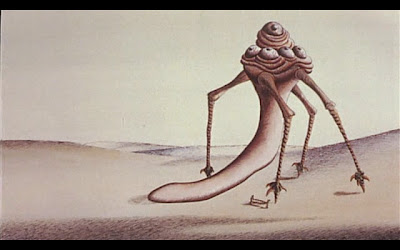 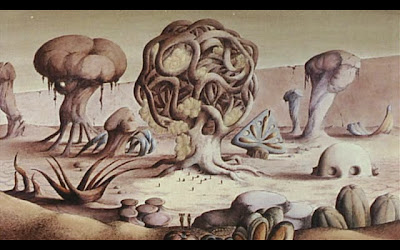 The images from La Planete are from HAPPIER CIRCUMSTANCE

The Roland Topor images are from art of the beautiful -grotesque.

Posted by Tristan Eldritch at 7:06 PM