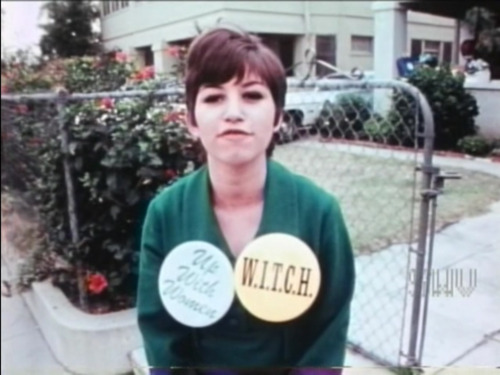 Formed in 1969 from the ashes of the NYRW (New York Radical Women), the Women's International Terrorist Conspiracy from Hell (W.I.T.C.H.) was a decentralized association of covens dedicated to feminism, socialist activism, and surrealist guerrilla street theater.  As such, they neatly embodied many of the most significant tendencies of the emergent counterculture: the often precarious mixture of political radicalism and dadaist spectacle patented by the Yippies, as well a brand that echoed the burgeoning revival of witchcraft and occultism.  According to an early manifesto:
WITCH is an all-women Everything.  It's theater, revolution, magic, terror, joy, garlic flowers, spells.  It's an awareness that witches and gypsies were the original guerrillas and resistance fighters against oppression - particularly the oppression of women - down through the ages.  Witches have always been women who dared to be: groovy, courageous, aggressive, intelligent, nonconformist, explorative, curious, independent, sexually liberated, revolutionary.  Witches were the first Friendly Heads and Dealers, the first birth control practitioners and abortionists, the first alchemists (turn dross into gold and you devalue the whole idea of money!)  They bowed to no man, being the living remnants of the oldest culture of all - one in which men and women were equal sharers in a truly cooperative society, before the death-dealing sexual, economic, and spiritual repression of the Imperialist Phallic Society took over and began to destroy nature and human society. 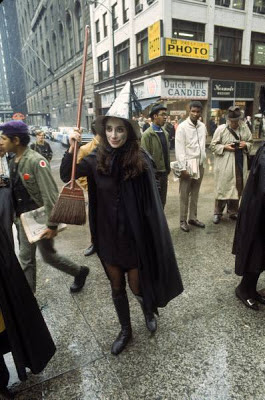 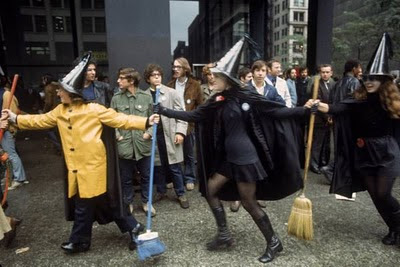 Their first act was to place a hex on the Black Iron Prison of Wall Street.  According to an article on Jo Freeman.com: "Because WITCH actions could be done with a small group and were both fun and political, they quickly spread around the country. Boston women hexed bars. DC women hexed the Presidential inauguration. Chicago women zapped everything. On January 16, 1969, eight undergraduate women at the University of Chicago hexed the chairman of the Sociology Department, which had recently fired a popular woman professor. Dressed in black with their faces painted white, they told him to "beware of the curse, the witch's curse."  The WITCH acronym was used to mean a variety of different things on different occasions: Women Inspired to Tell their Collective Histories, Women Interested in Toppling Consumer Holidays, and, most comically, Women Incensed at Telephone Company Harassment during a demonstration against Bell Telephone.  Here is a wonderful picture of the witches dancing on front of the Chicago Federal building on October 31, 1969: 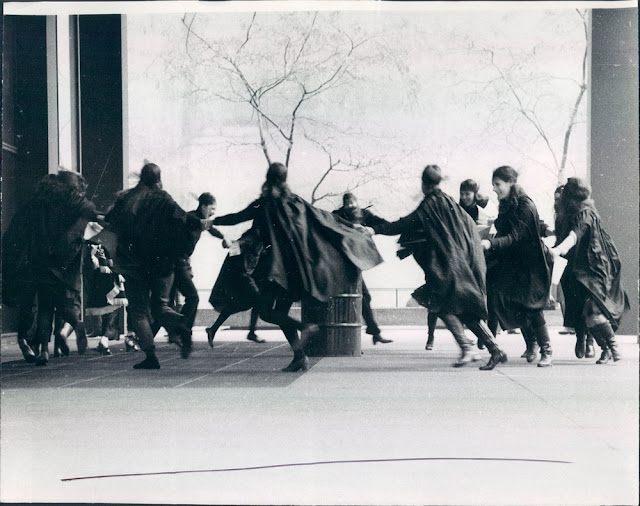 Posted by Tristan Eldritch at 7:36 PM

The full title was actually The Women's International Terrorist Conspiracy From Hell. =)

Corrected, thanks for the heads up!