Like Working without Working: The Spirit-guided Art of Augustin Lesage. 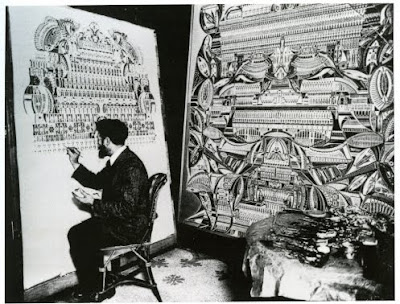 Via translinguistic other (via disinfo), I discovered the work of Augustin Lesage (1876 - 1954) today. There seems to be a dearth of English language information regarding the artist, but his French wikipedia entry informs us that Lesage was born in the north of France, and spent much of his early life working as a laborer in the coal mines near Saint Pierre les Auchet. It was while working underground that Lesage discovered his vocation: in 1911, a voice whispered to him "One day, you will be a painter."

Later, Lesage became active in local Spiritualist circles, and opened a regular channel of communication with the spirits via automatic writing. Once again, the voices from Elsewhere took a firm command of Lesage's artistic career; if he, or his French wiki is to be believed, they told him what paints and brushes to buy, and insisted that he worked on large, three metre square convases.

For the next two years, Lesage returned home from the mines and worked on these canvases, apparently guided at every turn by the spirits. Of this process, Lesage made a comment which speaks to the passive, receptive nature of creativity when it is operating at its highest pitch: "It was like working without working." The idea of spirit guidance may not be something that many contemporary readers are apt to take very seriously, but it is as good a metaphor as any to describe the essentially mysterious engagement with the unconscious (whatever that is) which often must be incurred in order to produce great art and science.

The disinfo post comments "They share a visual resonance with the often reported DMT visions of fantastic and unbelievably ornate architecture, dense vistas of cryptically purposeful temples-within-temples made of transparent jewels. I've seen these "places" on a few occasions, and it does make me wonder what was happening neurochemically in the brains of visionary artists such as Lesage, William Blake, Grant Wallace, or James Hampton and his posthumously discovered Throne of the New Millennium." Here are some pieces by Lesage; check out more at tranlinguistic other where the images can be clicked to view in greater detail: 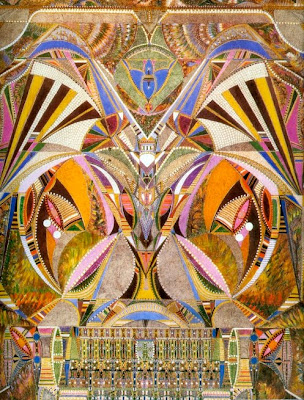 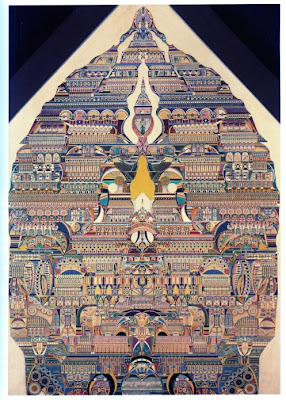 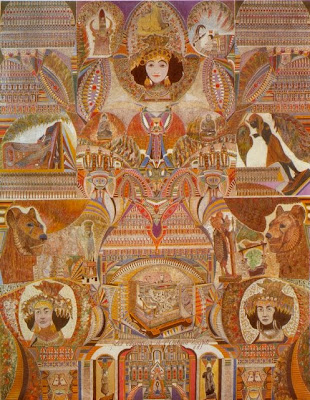 Wow. I'd never heard of him either and like the look of his work. If an exhibition ever comes through England, I'll be sure to visit.

It looks like he was channeling Klimt in some of those pieces! The whisper in his ear was fashionable enough to adapt one of the styles of the period - Art Nouveau and Klimt's mosaic techniques. How fortunate he wasn't channeling a Bosch whose style was out of favour...

The best artists have a quirk so if he thought he was merely an instrument of the Muse, he was in good company. Lovely work.

"It looks like he was channeling Klimt in some of those pieces! The whisper in his ear was fashionable enough to adapt one of the styles of the period - Art Nouveau and Klimt's mosaic techniques. How fortunate he wasn't channeling a Bosch whose style was out of favour..."

The spirits are well capable of staying abreast of what's happening in the art scene! Just because they are on another etheric plane doesn't mean they don't visit galleries, and occasionally leaf through a fashionable periodical.

Amazing! They also remind me a bit of the Mandelbox fractal.