the unconscious diagram of a mysterious psychic event: Ballard vs. Roxy Music. 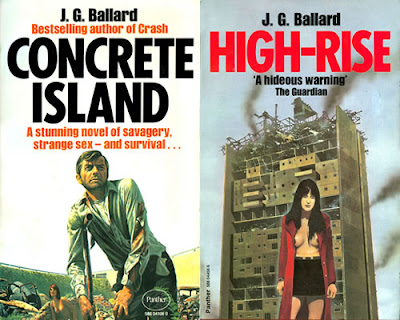 The spectacular view always made Laing aware of his ambivalent feelings for the concrete landscape. Part of its appeal lay all too clearly in the fact that this was an environment built not for man, but for man’s absence.

Laing leaned against the parapet, shivering pleasantly in his sports clothes. He shielded his eyes from the strong air currents that rose off the face of the high-rise. The cluster of auditorium roofs, curving roadway embankments, and rectilinear curtain walling, formed an intriguing medley of geometries – less an architecture, he reflected, than the unconscious diagram of a mysterious psychic event.

During the day, as Laing took his supervision and lunched with his colleagues in the refectory, he thought continually about the apartment building, a Pandora’s box whose thousand lids were one by one inwardly opening. The dominant tenants of the high-rise, Laing reflected, those who had adapted more successfully to life there, were not the unruly airline pilots and film technicians on the lower floors, not the bad tempered and aggressive wives of the well-to-do tax specialists on the upper floors. Although at first sight, these people appeared to provoke all the tensions and hostilities, those really responsible were the quiet and self-contained residents, like the dental surgeon Stele and his wife. A new social type was being created by the apartment building, a cool, unemotional personality impervious to the psychological pressures of high-rise life, with minimal needs for privacy, who thrived like an advanced species of machine in the neutral atmosphere. This was the sort of resident who was content to do nothing but sit in his over-priced apartment, watch television with the sound turned down, and wait for his neighbours to make a mistake.

Perhaps the recent events represented a last attempt by Wilder and the airline pilots to rebel against this unfolding logic? Sadly, they had little chance of success, precisely because their opponents were people who were content with their lives in the high-rise, who felt no particular objection to an impersonal steel and concrete landscape, no qualms about the invasion of their privacy by government agencies and data-processing organisations, and if anything welcomed them for their own purposes. These people were the first to master a new kind of twentieth century life. They thrived on the rapid turnover of acquaintances, the lack of involvement with others, and the total self-sufficiency of lives which, needing nothing, were never disappointed.

Alternatively, their real needs might emerge later. The more arid and affectless life became in the high-rise, the greater the possibilities it offered. By its very efficiency, the high-rise took over the task of maintaining the social structure that supported them all. For the first time it removed the need to repress every kind of anti-social behaviour, and left them free to explore any deviant or wayward impulses. It was precisely in these areas that the most important and interesting aspects of their lives would take place. Secure in the shell of the high-rise like passengers on board an automatically piloted airliner, they were free to behave in any way they wished, to explore the darkest corners they could find. In many ways, the high-rise was a model of all that technology had done to make possible the expression of a truly “free” psychopathology.

Posted by Tristan Eldritch at 5:10 PM