Kenneth Grant Part 1: Outside the Circles of Time. 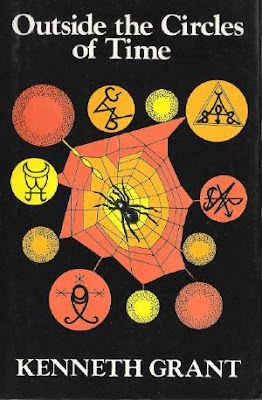 “If you hold it up against the light,” he suggested, “an altogether different picture will emerge.”

Against the Light, by Kenneth Grant.

I first encountered the miasmal prose and strange mindscape of Kenneth Grant a few years back, when I was an undergraduate. Though I had virtually no interest in the occult at the time, I often found myself drifting up to the rather small Occult and Paranormal section on the top floor of my university library. The selection of books on ESP and witchcraft rekindled dim memories from my childhood: things like Arthur C. Clarke’s Mysterious World on television; a selection of issues of The Unexplained which I had acquired at a small family auction; the faded Corgi paperbacks on UFOs and Forteana that lingered in second-hand stores long after the bong fumes of the 70’s esoterica-binge had vanished into the cultural ether. The images in The Unexplained remain permanently etched in my mind: Billy Meier’s absurd and numinous flying saucers hovering over gorgeous, sunlit Swiss meadows, contrasted with that grim, iconic shot of John Irving Bentley’s lower leg, the rest of him having burnt, apparently by spontaneous and inexplicable means, into a cinder on the floor of his bathroom. 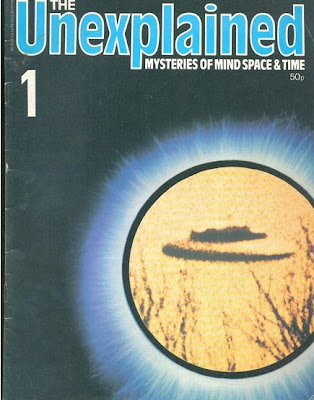 Most of the books I leafed through on those time-wasting excursions were reasonably forgettable. However, I discovered one book which had an otherworldly ambience quite unlike anything I had ever encountered before: Outside the Circles of Time by Kenneth Grant. Ambience is almost an insufficient word; this book had about it a veritable stench of high strangeness and borderline insanity. It had lost its dusk jacket, so I was approaching the text cold, with no solid grasp of what kind of book it purported to be. It contained a series of illustrated black and white plates, all of a markedly decadent and eerie character. These images included a shrine to the Egyptian deity Set, a brawny hermaphrodite of classically heroic proportions, and various depictions of cosmic entities derived from H.P. Lovecraft’s Cthulhu Mythos. The effect of the illustrations varied from the unsettling to the comic; some resembled discarded sketches that might have adorned the cover of a Hawkwind record.

The text itself offered fewer clues. It seemed to be written in an entirely unfamiliar language: a stream of mythological, Kabbalistic, and numerical correspondences whose underlying system remained as obscure as their overriding argument. It was extremely difficult to get a handle on whether the book was intended to be fact or fiction, or whether its author was being serious or slyly camping it up. His writing style is entirely in the baroque idiom of weird fiction, suggesting in its quieter and more prosaic moments the scholarly fantastique and archaic phrasing of Lovecraft or Borges:

“There exists at the present time a secret coterie of Chinese Adepts, the members of which yet practise the ancient rites connected with the Tunnel of Niantiel. I have visited a sanctuary of this sodality hidden the heart of London. It uses the magical formula of Pe after the manner of Cults which arouse the Fire Snake by methods similar to those described in the previous chapter.”

Most outrageously, Outside the Circles of Time makes no bones about suggesting that Lovecraft’s whole dark cosmic mythology, including its notorious fictional grimoire the Necronomicon, is actually quite real:

“Certain fugitive elements appear occasionally in the works of poets, painters, mystics, and occultists which may be regarded as genuine magical manifestations in that they demonstrate the power and ability of the artist to evoke elements of an extra-dimensional and alien universe that may be captured only by the most sensitive and delicately adjusted antennae of human consciousness…..it is evident from Lovecraft’s many allusions to the Necronomicon that it contains knowledge derived from sources that antedate vastly the present evolutionary life-wave on this planet….”

I honestly didn’t know what to make of that bombshell. Was Grant some fantasist who had indulged far too voluptuously in purple prose, finally hitting the rock bottom, the outer limit, of wild credulity? Or was this rather some kind of heroic feat of postmodern occultism, an explosive Molotov cocktail primed in the service of what Robert Anton Wilson labelled ontological terrorism? Were these the ravings of a certifiable head-case, or the sardonic tricks of giddy literary parodist? Or….is the Cthulhu Mythos actually real? (Comic book legend and hirsute, affable magician Alan Moore has observed of Grant that the “atmosphere of his peculiar mind hung in a churning fogbank over every page” of his writing, and the question which has surely haunted every reader of his work is “just how much of this is supposed to be…you know…real?”)

Well, naturally I wanted some answers to those pressing questions. Following the immortal dictum of Abbie Hoffman, I stole Outside the Circles of Times shortly thereafter…..and that infernal grimoire has been in my possession ever since… 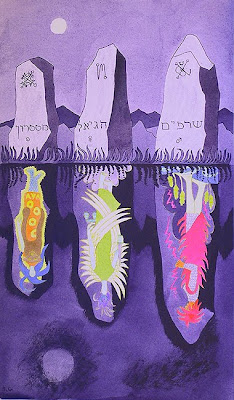 I’m writing about Grant now owing to a strange sequence of events that would not be entirely out of place in the Magus’s own weird writings. About two weeks ago, I felt a peculiar presentiment to return to Grant’s work, ostensibly to derive some inspiration for a horror novel I was trying to write concerning Neolithic stone circles and timeless Lovecraftian horrors. I had a real hankering to read another one of his books, so last Sunday I downloaded Against the Light, and for the next three days I thoroughly absorbed myself in Kenneth Grant’s spectral headspace. I intended to write up a post about those occultic researches here. Then on Wednesday morning, I went to check my blog-roll and discovered the cover of Grant’s The Occult Revival at the head of a couple of blogs. Starfire Publishing, who specialize in authors and artists whose work is “of relevance to the Typhonian gnosis”, made official the announcement that Kenneth Grant had died after a prolonged illness on January 15th. My project, unbeknownst, had been an obituary all along.

This Weird Wake will continue shortly. 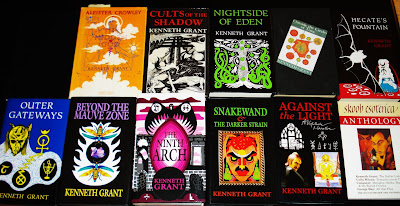 Posted by Tristan Eldritch at 9:01 PM

Great post Tristian - very much captures the that 80s occultural atmosphere that I grew up with. I linked you to my Disinfo obit. Looking forward to the series.

Dp1974,glad you enjoyed it, thanks for linking on disinfo!