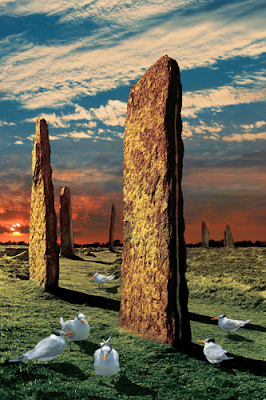 Established in 2004 by Julian House and Jim Jupp, Ghost Box Music is an independent record label with a uniquely cohesive vision and mission: to celebrate a glorious legacy of weird British culture from the 60's and 70's, and to create new musical forms, and a distinct cultural aesthetic, from the lingering ghosts of childhood memory. With a small roster of closely related artists, including the Advisory Circle, the Belbury Poly, and the Focus Group, the label specialises in atmospheric electronic music that is steeped in a half-remembered fog of surreal children's TV shows, cosmic horror and sci-fi paper-backs, library music, novelty synthesiser records, and stunningly off-kilter Public Information films. Particularly important to the label's aesthetic is the notion - arguably also the main conceit of The Twilight Zone - that the most mundane, ordinary, seemingly safe environment can suddenly intersect with strange other dimensions. Founder Jim Jupp cites British science fiction and catastrophe author John Wyndham:

“Part of a theme that’s ongoing in all the Belbury Poly records, and I think all of the Ghost Box records, is a tradition of British science fiction, where you’ve got on the one hand the setting of a very traditional background, with very ancient things, but you’ve got this weird, cosmic stuff happening [at the same time]. A lot of old British sci-fi books – John Wyndham, for instance – have these really mundane, quaint little village settings, but all of a sudden something really freaky and cosmic appears in the middle of it.” 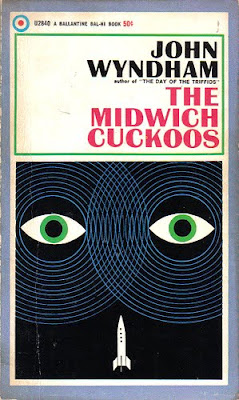 The cosy and quotidian tinged with a strange and potentially threatening undertow - this incongruous but perennially satisfying mixture lies at the heart of the Ghost Box sensibility. In the logic of the world they have crafted from memory, quaint British villages are subject to abrupt Lovecraftian infestation; paternal safety warning are delivered with an edge of menace worthy of the Daleks; and children's afternoon adventure serials have weird psychedelic overtones. All of these elements were present and correct to some degree in seventies British culture; Ghost Box's music and design sensibility attempts to imbue these eerie cultural artefacts with all the numinous power they possessed for the children of that generation.

The ghost box itself was one of many DIY interfaces that have emerged between the worlds of technology and spiritualism. Invented by amateur radio enthusiast Frank Sumption, it was essentially a radio receiver/recording device which was designed to scan the static ether for voices from beyond the grave. (Popular legend has it that Thomas Eddison was secretly absorbed in experimental efforts to establish such a communication network with the afterlife.) With Ghost Box Music, the metaphor becomes explicitly cultural, recasting the television as the haunted medium, beaming otherworldly, often subversive transmissions into the cosy sanctuary of the family home. The idea maintains much of its paranormal overtones, however, and we are invited to envision nostalgia and cultural sampling as a form of occult channelling.

The culture we are exposed to as children exerts an extraordinary power over our imaginations; it leaves a heightened impression of something, which is not quite what it was, or is perhaps the essence of what it was in a way that becomes only partially retrievable through memory. Every childhood will then create a store of memories to haunt the adult world; a series of entities out of time which, like paranormal hauntings, operate under a potent but mysterious logic.

The seventies in Britain was a harvest time for such hauntings. Seventies culture in general exhibited a healthy appetite for weirdness, largely as a result of the many mental doors left ajar in the aftermath of the sixties. There was a massive popular resurgence of interest in the occult, so widespread that it prompted the greatest Time magazine cover of all time on June 19, 1972: 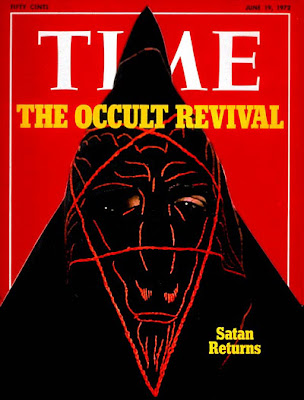 For perhaps the first time in its history, Fortean/unexplained phenomenon became a huge mass market preoccupation. One of the most characteristic cultural avatars of the seventies was the Ancient Astronaut, itself a retro-futuristic spectre emerging from the dimness of memory: 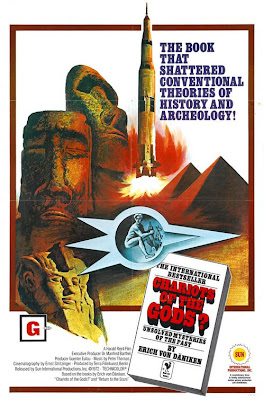 All of these things coincided with, and feed directly into, an extraordinary golden age of British science fiction and fantasy television and cinema. In this period - late 60's, 70's - Britain exhibited a preternatural genius for surreal, visionary genre pop culture that remains unequalled to this day. The real roots of this Renaissance go back to the fifties, and the BBC's Quatermass serials written by the legendary Nigel Kneale. Kneale really hit his prime in 1958 with the landmark third outing Quatermass and the Pit. While some of these cultural artefacts are retro-futuristic, others are examples of true futurism, of extraordinary leaps of prescience appearing in ghostly form before their time. Quatermass and the Pit falls in the latter category. All of the weird DNA of seventies culture, and beyond - Ancient Astronaut theory, Martian mysteries, neo-paganism, insectile aliens, military cover-ups - were present in Kneale's gripping drama, and his innate gifts for story telling and suspense made this invasion of the unconscious a unlikely success with the viewing public.

This Educational Series for Unusual Boys and Girls continues Here.

Posted by Tristan Eldritch at 7:47 AM

Great post, thanks for the info and the images! I'm really haunted (sorry :)) by the Ghost Box catalog; it took a while for me to get into the Focus Group/Broadcast album but now I'm all over it and sparkled the interest in Ghost Box's other bands. Great stuff!

I think there's an album that's got a lot to do with all the hauntology stuff: Joe Meek's "I hear a new world". Totally recommended if you haven´t listened to it

Hey. Thanks for the recommendation. I've always meant to give a proper listen to some of Meek's stuff, so I'll definitely check that one out.