The Coming Race: A Secondary Excursion into the Cavern World. 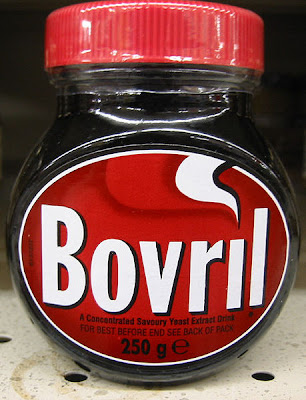 Edward Bulwer-Lytton was many things - poet, politician, novelist, dabbler in the occult, and man of fashion. (It was this latter predilection which engendered a bitter, albeit petty lifelong feud with Alfred Lord Tennyson, each accusing the other of the then unspeakable crime of effeminacy.) Bulwer-Lytton was somewhat of a literary giant in his day, but has suffered a kind of posthumous infamy for the opening salvo of Paul Clifford : "It was a dark and stormy night; the rain fell in torrents - except at occasional intervals, when it was checked by a violent gust of wind which swept up the streets (for it is in London that our scene lies), rattling along the housetops, and fiercely agitating the scanty flame of the lamps that struggled against the darkness." Fools tend to scoff at this line nowadays, but it is merely proof of Bulwer-Lytton's uncanny genius for the commonplace. He is also the originator of "The Pen is Mightier than the Sword", "the Pursuit of the Almighty Dollar", and the "Great Unwashed." Those are pretty impressive fingerprints to leave on the lexicon, by any standard.

Bulwer-Lytton's chief literary legacy, however, lies in a strange, remarkable book he published in 1871 - The Coming Race, later known as Vril: The Power of the Coming Race - which is a seminal tome both in the esoteric realm of the Crackpot Unconscious, and in the cannon of science fiction itself. The Coming Race has a fairly skeletal plot - a young narrator is exploring a mine shaft one day, and accidentally falls much deeper underground, finding himself in a Cavern World inhabited by an ancient race of giant, angelic beings called the Vril-ya. The bulk of the novel is devoted to a detailed description of the Vril-ya's matriarchal social structure, their culture, beliefs, and so on. Some minimal romantic complications are established in lieu of plot - and eventually our intrepid narrator escapes back to the surface world, armed, rather unsurprisingly, with a Dire Warming for Mankind.

By utilising plot merely as an expedient frame to facilitate the creation of an imaginary society, The Coming Race's primary literary model is clearly the Utopia. But what distinguishes Bulwer-Lytton's novel from its Utopian predecessors is the sheer weirdness and exoticism of the imagined community - Sir Thomas More's Utopia, after all, was merely an undiscovered island populated by regular humans; the Vril-ya are a race of massively tall, winged beings who wield a mystical power over matter, and live underground. It is worth noting that the movement of the Utopian format into increasingly exotic environs is a crucial element in the development of science fiction and fantasy - it is where we get the impulse to create intricately detailed alternative worlds.

But where did the exoticism come from? The quick, glib, and largely accurate answer to that question is evolution. The Race was published in the same year that Darwin completed The Descent of Man. The emergence of evolutionary theory, coupled with the findings of Charles Lyell and a variety of other geologists, was throwing up a variety of ideas about man's place in nature which were themselves extraordinarily exotic and shocking. We process these kinds of cosmological shocks and upheavals best not in realistic modes of discourse, but rather in mythic, archetypal patterns, which have a more direct relationship to the unconscious. This is why, to my mind at any rate, sci-fi has always been a Janus-faced phenomenon, a restoration of very ancient mythic forms designed to mediate the shock of extraordinary novelty and change in the modern world.

Bulwer-Lytton captured this mixture of archaic wonder and modernity when he claimed that what he was attempting was "perhaps a romance, but such a romance as a Scientific amateur....might compose." The Coming Race grappled with a very specific, deeply unpalatable notion: "the Darwinian proposition that a coming race is destined to supplant our races." Herein lay the sting in the tale, and the source of the narrator's Dire Warning for Mankind which forms the novel's coda: "I arrived at the conviction that this people - though originally not only of our human race, but, as it seems clear to me from the roots of their language, descended from the same ancestors as the great Aryan family, from which in varied streams has flowed the dominant civilisations of the world; and having, according to their myths and histories, passed through phases of society familiar to ourselves, had yet now developed into a distinct species with which it was impossible that any community in the upper world could amalgamate: And what if they ever emerged from those nether recesses into the light of day, they would, according to their own traditional persuasions of their ultimate destiny, destroy and replace our existent varieties of man." (This passage, with its evocations of Aryan jingoism, "ultimate destiny", and genocide, is eerily prophetic of the dark dreams of racial destiny that "emerged from those nether recesses" of mind into Nazi Germany in the 20th century.) 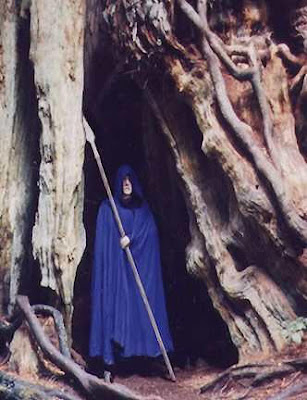 The element that really captured both the public and esoteric imagination, however, was the mysterious power wielded by Bulwer-Lytton's Cavern-dwellers: Vril. Vril is a power over matter which is acquired via an intense training and concentration of the will; it can heal, renew, or destroy; in classic necromancer-style, it is directed through the Vril staff, which contains a series of mechanical keys and springs whereby the force of Vril can be calibrated for maximum effect. Vril was an ingenious creation which amalgamated age-old speculations about a primordial, unitary cosmic energy with contemporaneous scientific speculation:

"I should call it electricity, except that it comprehends in its manifold branches other forces of nature, to which, in our scientific nomenclature, differing names are assigned, such as magnetism, galvanism, and so on. These people consider that in Vril they have arrived at the unity in natural energic agencies, which has been conjectured by many philosophers above ground, and which Faraday thus intimates under the more cautious term of correlation."

In the spiritual traditions, Vril is analogous to the Vedantic Pranashakti and the Chinese Qi or Ki, both of which relate breath to a primordial energy source or life-force. In fringe science and conspiracy theory, it resembles the notion, frequently ascribed to the ever mythologised Nikolai Tesla, that zero point energy could be harnessed as as a source of unlimited free energy. In popular culture, Vril is the clear precursor to the Force in George Lucas' lamentably ubiquitous Star Wars franchise.

Once again, we witness the Bulmer-Lytton genius for the commonplace: Vril is a kind of master meme that simply refused to stay within the fictional confines of its original context. Above ground, Vril seeped surreptitiously into the mass psyche literally in a liquid form. In 1870, Napoleon III, having sensibly resolved that his troops couldn't "march on empty stomachs", ordered one million cans of beef from Britain to feed his troops. The responsibility for providing the beef fell to a Scotsman, John Lawson Johnson. Sadly, there wasn't enough beef in Britain to fill the gaping belly of the French infantry. Johnson improvised, producing a product with the unappetizing name of "Johnson's fluid beef". By 1888, Mr. Johnson's fluid beef was a popular item in shops, chemists, and public houses, sold under the new name of "Bovril", a combination of the Latin bos (bovine, cow or ox) and the Coming Race's Vril. Bovril is still commercially available today. My childhood memories of this reputed elixir are unambiguously negative. 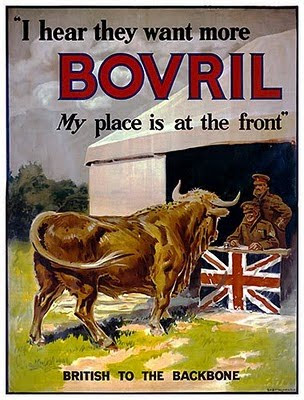 Faddish marketing is one thing. There are, however, even today certain people who believe that The Coming Race is either partially or wholly based on truth. The formidable Madame Helena Blavatsky, ever the incorrigible magpie, eagerly incorporated Vril into her portmanteau cosmology in Isis Unveiled and The Secret Doctrine. As mentioned in the last post, the Theosophists had established a fascination with a certain strain of Tibetan legendry that told of subterranean worlds: Agartha, the city at the earth's core, its central district of Shamballa, and the Ascended Masters who dwelt therein. Much of this legendry has been embellished in tall explorers tales, such as The Smoky God (1908) by Willis George Emerson. 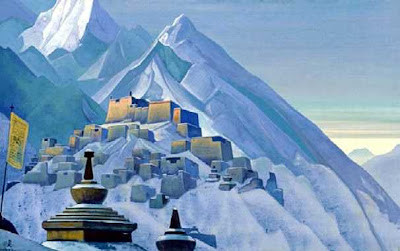 Interestingly, the 1923 book Beasts, Men, and Gods by Polish author, journalist, and globe-trotting adventurer Ferdinand Ossendowsky records an unusual event reported to have taken place in the Tibetan monastery of Narabanchi in 1890, 19 years after the publication of The Coming Race. The monastery was said to have been visited by the King of the World, a denizen of Agartha, who passed on a prophesy to the High Lama. The next century would witness a succession of increasing horrors, it said, until the year of 2029, when "the people of Agartha will leave their caverns and appear on the surface of the earth."

The theosophical Agartha and Bulwer-Lytton's seminal fiction would in time be woven by the Crackpot Unconscious into a sprawling narrative of Nazi occultism, underground bases in the Antarctic, and Vril-powered wonder weapons and UFOs. We will leave off for the moment, however, safe in the knowledge that these Garbo-like denizens of the Cavern World will not be troubling us for the immediate future. 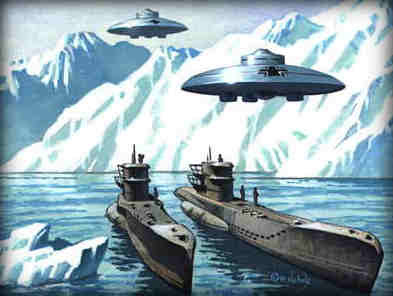 Postscript. Let us return briefly to to the magnificent icy wastes of the Antarctic, that land of perilous adventure in which the varied strands of our strange tale all converge. The New York Times of September 11, 1916 contained a thrilling dispatch entitled SHACKLETON'S MEN KEPT HOPE OF RESCUE HIGH; MAROONED SCIENTISTS LIVING ON PENGUIN AND SEAWEED, WATCHED DAILY FOR RELIEF. Note the following extract: "For the first three weeks after Shackleton's departure, Wild's party suffered from frostbite and exposure. Weather conditions having forced them to abandon their icehole, they rigged up a shelter by turning their two remaining boats upside down. A blubber lamp supplied their only light, while an old oil can served the purpose of a cooking stove. They had no tea or coco, their only hot beverage being the bovril, the consumption of which it was necessary to economise as much as possible".

"The conditions prevented seals from landing. When one was caught every scrap was utilized. The weather was continuous storms and fogs. The daily menu consisted, for breakfast, of penguin fried in blubber with a drink of water; for luncheon, biscuits with raw blubber, and a dinner of penguin breast and Bovril."

This extraordinary narrative of privation, found here, goes on to say that these unique men were driven by a lack of tobacco to smoke "grass taken from the padding of their boats, in pipes carved from bird bones and wood."

Posted by Tristan Eldritch at 2:20 PM

Mountains of Madness...once again, truth proves itself as strange, if not more so, as fiction. There seems to be very few ideas that someone, somewhere, can not find the will to champion.

I liked the following question and answer from an article by Marilynne Robinson, that can be found here: http://www.commonwealmagazine.org/thinking-again

” What is man? One answer on offer is: An organism whose haunting questions perhaps ought not to be meaningful to the organ that generates them, lacking as it is in any means of “solving” them.

Yes, the Mountains of Madness loom strangely over all of this business, and more of them anon.

That is an interesting quote (it would make a brilliant closing monologue in an old Twilight or Outer Limits episode!) The question of how, why, and to what degree we know things is something that...we may never know, I guess! We need another perspective, I think. Aliens, or AI, or some other medium of intelligent awareness with which we can compare notes....otherwise, we remain unsure whether or not our brains can solve the questions we ask, or even articulate the right questions in the first place...