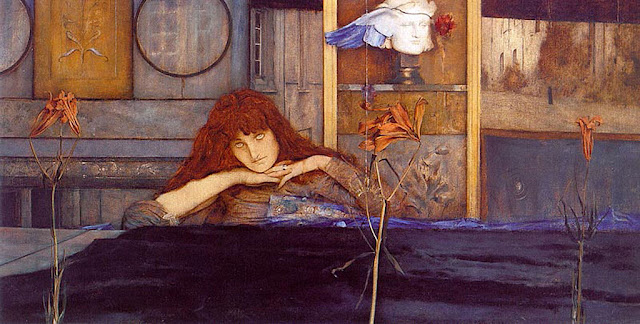 We pass through innumerable fleeting and unreal places in the course of a lifetime of dreaming. I am haunted by a handful of these locations. Their particular impression, and the longing for them, returns to me from time to time. In the daylight hours, I think of the impossibility of ever seeing them again. In rare moments of lucid dreaming, I wonder if they have been preserved intact, so that I might revisit them, but I don't believe that I have ever done so successfully.

The attraction of these places is difficult to convey. In the context of the dreams themselves, they are unexpected discoveries, because they are adjacent to real places to which I am extremely familiar. I will be walking in the countryside near the house where I grew up, or in the small town where I went to school, and suddenly discover a place whose existence I had no prior inkling of. That was, I supose, the primary source of their fascination: that the small and well-trodden everyday world should reveal an unseen aspect of itself, an impossible hidden dimension. Beyond that, the places themselves were entirely undistinguished and ordinary; but the unlikelihood of their existence, and the novelty of their discovery, infuses them with an air of revelatory beauty, and fills me with a rare and indefinable sense of contentment.

Then, of course, I wake up, and the mystery of the anomalous location evaporates. By day, the world is fixed and intransient, like the unwinding of an implacable destiny; in dreams, it becomes playful and miraculous, like a fleeting respite. A handful of those evanescent, imaginary places have remained with me, retaining their melancholic spell over the course of many years. The details have dimmed over time, but the impression retains its haunting efficacy, its firm placement on a map of interior geography. At once opaque and crystalline, as maddeningly indefinite and undeniable as all our truest apprehensions of the world, those places which never existed sometimes show the greatest tenacity in refusing to pass away.

Closely related to the nostalgic longing for places which never existed is that for places which once existed, but now are gone. These, too, are often meagre and unremarkable in themselves, but have acquired an ineffable glamour owing to their presence in our childhood. Time, like the spatial world, assumes a fixed form wherein the way forward is increasingly paved with the hard gravel of paths already travelled; but the way back is barred by an insurmountable barrier. So the places which remain on the other side assume all the poignancy of the loss of our pristine and unjaded childhood senses.

I remember a little shop on the main street whose window was pressed with the packaging of various cheap toys and trinkets. I stood many times with my mother, gazing at the toys, and imagining the interior of the store as a dark, almost solemn place, presided over by a quiet but kindly old woman who moved only at the behest of pointing children's fingers. I also recall with peculiar fascination an arcade on that street. It was an airless and foreboding concrete corridor with no adorments to indicate its function. Stepping into it felt like going underground, and even then, out of time. I remember its barbers, where I sat with my father and my brother. We listened to the radio, and watched the men working and chatting tersely with tired, distant faces. My eyes always drifted over to a painting on the wall - Emile Renouf's picture of a little girl rowing a boat with an old fisherman - and instantly I felt the salt-water in my nostrils, the icy chill of sea wind, and the kindly, wordless warmth of the fisherman. Next to the barbers, there was a bookshop, and the only the thing that stirred my imagination in the arcade – a little table in the centre of the store where brittle, faded old comic books were laid out like drying flotsam.

The loss of places has a peculiar poignancy, which sometimes pierces our hearts in a way that the loss of people does not. People become so familiar to us, so ingrained in our minds in all their complexity, that it sometimes feels as though we never really lose them. They are gone, and yet they are there, composed of the same insubstantial material by which we carry the sense of ourselves from one day to the next. But certain places that we remember, old meadows and woodlands buried under concrete, shops enveloped with the musk of vanished days, they are gone forever. All that remain are their impressions, their precious haunted outlines.

In their youth, people exist primarily in the present moment, and if their minds should wander, it is always to the future that their thoughts hurtle. As they get older, the present loses its intensity, the future becomes an object of uncertainty and dread, and it is to the past that their daydreams increasingly tend. The past becomes imbued with the magical embellishments of art and the hypnotic cadence of music; it acquires the sweet, irresistible frustration of contemplating an unattainable, impossible beauty. There is, however, a different kind of nostalgia which can afflict people at any age. This is perhaps not nostalgia properly speaking at all; it is the feeling of never being quite native to the soil of one's own time, of being an exile from some familiar clime irrevocably lost to memory's raccous swells and slowly receding tide.

For this type of person, the present has a kind of indistinctness, a lack of elegance and form, even a fundamental emptiness, in comparison to some prior era. For many of these temporal exiles, there is a specific period which they have adopted as their distant and longed-for homeland. For others, all past times alike exercize a narcotic thrall over their imaginations; there is nothing so diminished and colourless as the present instant, and nothing so lustrous and abundant as the irretrievable totality of a past time, evanescent and eternally vanquished.

Some particular periods, just as some individuals, are subject to this foolish and perverse proclivity for wallowing in the past, and ours is such a time. We wander in our dreams through places that once were, and now are gone, and places that never were, seeking some sense of ourselves which cannot be found in our febrile, insubstantial and eternally vanishing present.

Posted by Tristan Eldritch at 4:04 PM