Folksangere - A Danish Look at the London Folk Scene in 1967. 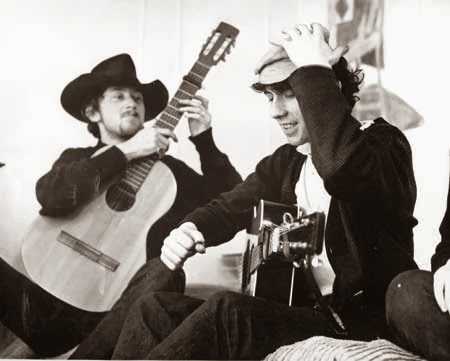 Following up the last Mod London post, here's a Danish documentary from 1967 focusing on the then glamorous and even illicit lifestyle of the London folk-musician.  This was a fascinating period for English folk.  In America, folk music was responding to the charge of Postwar culture either by embracing electric rock influences, or circling the wagons of traditionalism.  In London, following the trailblazing influence of Davy Graham, young musicians turned instead to a baroque mixture of jazz, blues, and Moroccan music to reinvigorate the traditional forms:

There are no subs for the Danish narration of the documentary, but it's the performance footage that matters.  (As the programme takes a lengthy, Beatles-scored ogle at London's new species of mini-skirted bird, and the interviewer only really seems interested in asking the musicians about drugs, it's unlikely to be very insightful anyway.)  The footage, however, is magical, and will be of particular appeal to finger-style guitar enthusiasts; look out for a fantastic live performance by John Renbourne, historical footage of a just pre-Pentangle John and Bert Jansch working on a tune in a flat, as well an interview with a reticent (and probably stoned) Jansch:

As a bonus, check out this wonderful clip of the newly formed Pentangle filmed a year later:

Posted by Tristan Eldritch at 9:17 PM