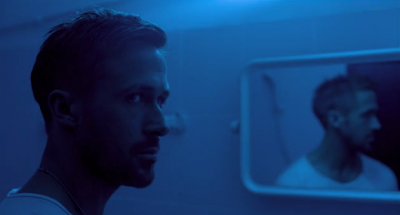 It would probably be understating the case to say that Only God Forgives hasn’t been as warmly received as its predecessor Drive.  In 2011, everybody seemed to love Drive, or at least love its soundtrack, or love Ryan Gosling, then in the pre-backlash stage of his burgeoning stardom.  A lot of critics admired the movie for bringing a kind of realism back to the American crime/action genre – which must say something about how untethered from reality that genre had become, since Drive was a weird kind of cinephilic fairy-tale/fever dream that seemed to exist as much in the mind of its autistic protagonist as anywhere else.  Only God Forgives, in contrast, after a boisterous premier at Cannes, hasn’t reviewed nearly as well, with its detractors evincing a sense more of offence than simple dislike.  (The Vulture’s David Edelstein thought it was “about the worst fucking thing I’ve ever seen”, for whatever that’s worth.)  Most reviewers have granted the film some stylistic props, but lamented its perceived hollowness, lack of narrative sophistication, and sparse character development.  This critical consensus, as far as I can see it, is wrong and wrong-headed.  Only God Forgives is one of the most immersive and hypnotic theatre experiences since Gasper Noe’s similarly beautiful and harrowing odyssey Enter the Void – a work of magnificent formalism that evokes memories of David Lynch, Dario Argento, John Pierre Melville, and some of the screen’s most wilful and hermetic dreamers. 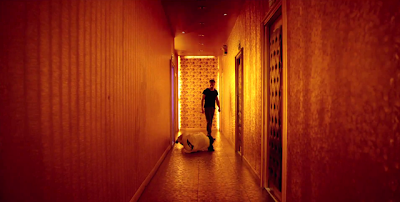 Only God Forgives is a pulpishly brutal revenge tale, comically unsubtle Oedipal psychodrama, and oddly straight-faced parable about submission to the will of God, all rolled into a beautiful and repulsive cinematic tone poem.  The revenge plot hinges around the death of Billy Thompson, a loathsome US expatriate drug dealer in Bangkok. Billy is killed by the father of an underage prostitute he has brutalized and murdered – a revenge killing facilitated by the imposing and stony-faced Lieutenant Chang.  Gosling plays his brother Julian, who runs a kick-boxing club in the city largely as a front for the family’s narcotics trade.  Gosling, as widely reported, plays the part as a study in astringent minimalism and outward imperturbability.  (In the snippets I saw in trailers, I thought Gosling’s minimalism looked overcooked and overfamiliar, but in the context of the whole film, it was perfectly appropriate and effective.)  Though practically mute, a great deal is conveyed about Julian’s character in the early part of the movie.  He is in an unorthodox relationship with a beatifically gorgeous prostitute (played by Rhatha Phongam), in which his role is strictly passive and voyeuristic.  Julian is haunted by a prophetic vision of Lieutenant Chang, and by nightmares of wondering through fluorescent corridors to darkened doorways which threaten dismemberment and castration.  Not in great mental shape, all in all.

The film’s gargantuan Oedipal “subtext” then arrives in the form of Julian’s mother Crystal (Kristen Scott Thomas, gleefully subjecting the middle-class propriety of her image to raw alcohol and a zippo lighter.)  Sigmund Freud’s theory of the primordial sexual psychodrama does not enjoy much respectability in psychiatric or philosophical circles today – but the cinema has always taken to it with a peculiarly riotous abandon.  One of the most memorable non-characters in the history of cinema is of course Norman Bates’ deceased mother.  Psycho captured America’s post-war Freudian boom at the height of its mesmeric power, and the movie’s final sequence consecrated the psychoanalyst as its true hero and oracle.  Two years later, John Frankenheimer produced the Cold War classic The Manchurian Candidate, which turns out to be at heart another torrid Oedipal hothouse.  Laurence Harvey’s brainwashed assassin is mind-controlled both by his Communist handlers AND his domineering mother, played by Angela Lansbury.  (Remarkably, Lansbury was only THREE years older than Harvey at the time.)  The film deftly interweaves the ideas of familial and ideological control.  Harvey’s character is unable to have a normal sexual relationship due to his mother; finally the spell is broken when his love interest arrives at a costume party dressed as the Queen of Diamonds, inadvertently the same image which his mother uses to hypnotise and control him.  His sexual liberation is the beginnings of his ideological rebellion, which culminates in the assassination of his mother instead of the proposed target.  The cinema’s fascination with the Oedipal complex continued into the 70s and beyond, finding a particularly lively expression in the films of the Italian horror auteur and Hitchcock devotee Dario Argento, particularly his 1975 classic Profondo Rosso.  There are two 80s Oedipal movies which warrant mention, since they come from directors with a particular significance to Refn.  In 1986, David Lynch’s Blue Velvet turned the coming of age story into a veritable Oedipal onslaught, and introduced us to Frank Booth, a character few would relish celebrating Mother’s Day with.   Finally, in 1989, Alejandro Jodorowsky turned the Oedipal nightmare into a literal three-ring circus in the bloody brilliant Santa Sangre.  (Sangre’s monstrous, vengeful mother and preoccupation with hands are distinctly echoed in Only God Forgives.) 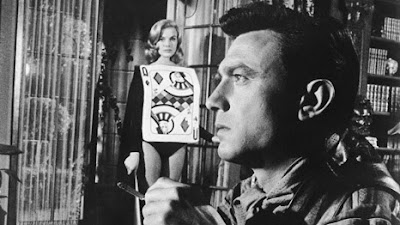 Julian, then, is the latest in a long cinematic tradition of Oedipal train wrecks going all the way back to Bates’ Motel.  (Whether this speaks to some inherent cinematic appeal in the trope, or to the preponderance of psychologically maladroit males among our great directors is open to debate.  One suspects a little of both.)  Like Harvey’s mind- and matriarchally controlled character in The Manchurian Candidate, Gosling’s Julian is unable to develop a normal relationship with a woman; hence his passive, unconsummated dalliance with the prostitute Mai.  We learn indirectly that Crystal coerced Julian into murdering his father with his bare hands back in America, resulting in Julian’s suffocating sense of guilt, and the film’s persistent association of hands and arms with guilt and sexual anxiety.  Julian, then, is an innately good character who has been warped and corrupted by his past and upbringing, and the film charts his struggle to break away from his mother’s domineering and toxic influence, and act instead autonomously and according to his conscience.  (Oddly, this redemptive aspect of the movie was widely ignored by the many commentators who stressed instead its supposed amorality and nihilism.)  In order to break free from his mother’s influence, however, Julian must cultivate a different kind of passivity; he must acquiesce to a higher order.  This is where, in a film not averse to big, blunt symbols, God enters the picture. 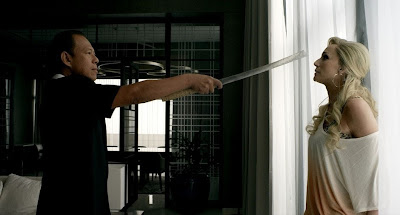 The hellish world of Only God Forgives has a moral order, but it is not a modern, societal kind of legalistic morality.  Instead, the movie’s heightened, operatic universe harks back to the God of the Old Testament, to the implacable retribution of the Greek Furies, and to an idea of moral order as a kind of natural force.  This natural force is embodied in the movie by the figure of  Lieutenant Chang.  Chang, it is constantly suggested, is no ordinary man.  For some reason, it took me a second viewing to notice that he produces his sword of justice virtually out of thin air.  Chang cannot be evaded and he cannot be defeated.  If you are to be judged by him, the movie stresses, the only power you possess lies in the ability to accept that judgement with equanimity and dignity.  Only through this lies the possibility of forgiveness and redemption.  Julian shows his better, god-like instincts early on in the film when he “forgives” his brother’s killer, but when Crystal arrives, she pushes him into a conflict with Chang which he knows is unjust and unwinnable.  In this sense, Only God Forgives resembles the old allegorical device of the psychomachia, or conflict of the soul in which the warring elements of the psyche are given an external form.  The movie’s conflict and tension derives from placing Gosling’s passive “hero” between the yin and yang of Chang and Crystal.  Julian breaks free from his mother by sparing Chang’s child; the actual physical defeat is left to Chang.  Refin seems to relish subverting and skewering the traditional role of the leading man and hero.  In Drive, he gave us a childlike, romantic psychopath; in Only God Forgives, a man whose physical strength hides his inner passivity and impotence, and who must break away from the Mother only in order to make abeyance to the Father.  In the concluding sequence, Julian offers his hands – the symbols of his outward strength and interior shame – willingly to Chang’s sword.

The narrative of Only God Forgives is thus simple but hardly simplistic.  As to the complaint regarding lack of depth in characterisation, Refn’s minimalism clearly follows after the late style of the great French noir master John Pierre Melville.  In Le Samourai, Le Circle Rouge, and Un Flic, Melville developed an abstract genre style in which characterisation was pared down to an absolute minimum, and characters express themselves solely through action and nuances of body language and facial expression.  Refn also follows after Melville in recognising cinematic genre as a form of coded and structured dreaming; genre becomes a deterministic world in which the characters are trapped, and to whose always pre-ordained conclusion they must march like sleep-walkers in a dream.  Another of Refn’s stylistic models clearly comes from David Lynch.  Refn strikes me as one of Lynch’s more successful imitators, largely because he borrows from Lynch’s formal technique rather than attempting to ape the content of his films.  Refn’s biggest debt to Lynch is in terms of sound-design: both directors use sound to create a pervasive sense of menace, of extraordinary weight and portentousness; they are more interested in the cultivation of an atmosphere, in the creation of an immersive experience, than in necessarily following the conventions of coherent, realistic narrative.  The movie’s visual sense is equally meticulous and painstakingly crafted; working with Larry Smith (Kubrick’s collaborator on Eyes Wide Shut) Refn has created a kind of psychedelic expressionism that recalls the gaudy and baroque creations of Dario Argento and Mario Bava.

Regarding the Refn/Melville connection, I notice that someone has awesomely put Nightcall over Le Samourai on youtube: