Libra: The Libartarian Utopia in the Sky (1978) 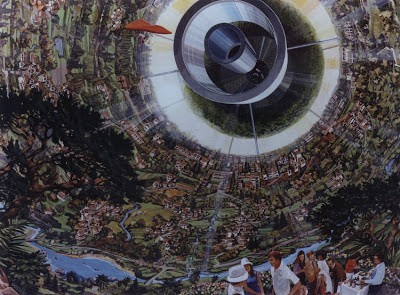 An interesting piece of ideological ephemera: produced and distributed by a San Diego-based free market think tank called World Research Incorporated in 1978, Libra posits a 2003 in which an over-regulated World Government has stifled innovation and enterprise to such an extent that libertarians have gone into near-earth orbit to form a space colony utopia of free market "freeponsibility":

Those curious (or baked) enough can watch the full 40 minute film here.

Via disinfo
Posted by Tristan Eldritch at 6:17 PM

They were about 10 years off and didn't consider that maybe an island would be simpler to implement than a space station.
http://www.dailymail.co.uk/news/article-2024761/Atlas-Shrugged-Silicon-Valley-billionaire-reveals-plan-launch-floating-start-country-coast-San-Francisco.html

Nick - yeah, reminded me a little of that story alright.