the owls are not what they seem, addendum 1: Carlos Castaneda and the Entities of the Night. 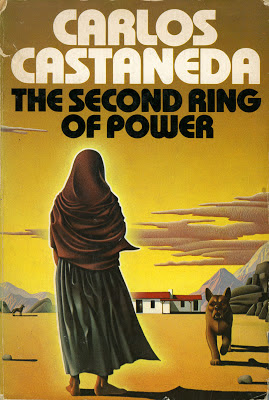 IT CAME FROM AN UNKNOWN PART OF THE WORLD AND HIT ME IN AN UNKNOWN PART OF MY SELF
A couple of posts back, I was discussing the evocative owls are not they seem meme present in the mythologies of both alien abduction and the Black Lodge of Twin Peaks.  I’ve always felt that the spare, haunted desert landscapes of Carlos Castaneda’s books had some tonal kinship with both David Lynch and the mythic shadow-side of Americana represented by the flying saucer; hence, it should have come as little surprize that Castaneda was wise to the owls way back in the seventies.
Journey to Ixtlan is the third of Castaneda’s books purporting to document his experiences while an apprentice to the Yaqui sorcerer don Juan Matus.  It was published by Simon & Schuster in 1972, and is said to be the book that made its author a millionaire.  According to one account, the ever elusive don Juan passed away the following year; the controversy regarding the factual veracity of the books began to rage in earnest, and Castaneda himself departed fully from the public eye.  Whatever their ultimate provenance, the don Juan books present a consistent and very evocative animistic view of the natural world.  What we see in the world, they argue, is not the world itself, both only the aspects of it which we have been trained from childhood to focus our attentions on.  We look at the world, but we do not see it.  What remains hidden from our narrowly focused looking is an ancient and utterly alien world populated by inscrutable presences and powers and spirits.  Only the knowledgeable sorcerer moves through this world with ease and without incurring considerable peril. 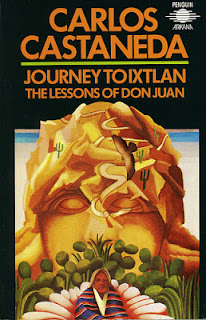 In the 14th chapter of Ixtlan, Castaneda and don Juan have travelled to a “place of power” at the foot of the western slopes of the Sierra Madre mountains.  Don Juan’s purpose is to teach Carlos the “gait of power”, a particular physical stance which allows the warrior to move with nimble briskness through the darkness of the desert night.  When the darkness is complete, don Juan tells Carlos that he will go on ahead of him, but will indicate his presence by initiating the “cry of a specific small owl”.  Carlos knows his mentor’s raspy owl imitation well at this point, and don Juan pointedly warns him not to follow any other, more melodious owl cries which he might hear in the darkness.
When they are reunited after some fitful running around in the dark, don Juan explains that he utilized the owl’s cry because the owls are the messengers of what he calls the “entities of the night”.  These he variously describes as “Powers, allies, spirits, who knows?”, and, more chillingly, “things in the night that act on people”. They separate again, and this time Carlos encounters the entities of the night directly.  He first hears an owl cry which he instantly recognizes as not belonging to don Juan:  “Another owl cry jolted me out of my deliberations.  It came from my left.  I did not follow it because it was without doubt the most sweet and melodious cry I have ever heard.  It did not frighten me too much though.  There was something very appealing, or perhaps haunting, or even sad about it.”
Carlos begins to see vague shapes moving in the darkness around him, and feel the close proximity of an animal to his left side (the left side, in Castaneda’s world, is the province of ever-watchful and patient death.)  He is subject to a profound anxiety of a kind he has never experienced before:   “My fear seemed to be a bodily sensation that had nothing to do with my thoughts.  I found that condition very unusual.  In the course of my life, my fears had always been mounted on an intellectual matrix and had been engendered by threatening social situations, or by people behaving towards me in dangerous ways.  This time, however, my fear was a true novelty.  It came from an unknown part of the world and hit me in an unknown part of my self”.  Don Juan begins to call out to him, sensing that he is in danger, but Carlos is temporality mesmerized by a strange apparition in the darkness:  “a sudden rustling sound to my left made me turn around in time to notice a black object, blacker than the surroundings, rolling or sliding by my side.   I heard a clicking sound, as if someone were smacking his lips, and then a very large dark mass lurched out of the darker area.  It was square, like a door, perhaps eight to ten feet high.”
Carlos feels a strange attraction/repulsion towards the dark door:  “My reactions were, as far as I was concerned, another total novelty.  Some part of myself seemed to pull me towards the dark area with an eerie insistence, while another part of me resisted.  It was as if I wanted to find out for sure on the one hand, and on the other I wanted to run hysterically out of there.”  Eventually, don Juan’s insistent cries succeed in drawing him away from the danger.  Don Juan’s later description of the entities is a classic example of Castaneda’s supreme ability to evoke a haunting sense of our co-existing at all times with an unseen world:
“You stumbled on some entities which are in the world, and which act on people.  You know nothing about them because you have never encountered them.  Perhaps it would be more proper to call them entities of the mountain; they don’t really belong to the night.  I call them entities of the night because one can perceive them in the darkness with greater ease.  They are here, around us at all times.  In daylight, however, it is more difficult to perceive them, simply because the world is familiar to us, and that which is familiar takes precedence.  In the darkness, on the other hand, everything is equally strange, and very few things take precedence, so we are more susceptible to those entities at night.”
Of course, the owl occupies a malefic or sinister role in various indigenous mythologies and folk traditions.  Its cry is often equivalent to that of the Celtic banshee, acting as the harbinger of an imminent death.  Nevertheless, the similarity of this particular episode from Journey to Ixtlan to the mythology of Twin Peaks – where the owls act as the emissaries of evil nocturnal spirits like Bob which act on people – is striking enough to constitute a strange intersection along the byways of an imaginary country.  Did Castaneda inadvertently discover an entrance to the Black Lodge, or was the whole episode another flight of his tricksterish literary imagination?  The reader knows as well as I.  Just be careful if you ever hear that hoot out late on a moonless night.

All quotations from Journey to Ixtlan: The Lessons of Don Juan, by Carlos Castaneda, Penguin Books Edition.


Posted by Tristan Eldritch at 4:47 PM

Fantastic essay, Tristan. I had completely forgot about that part of the book.

So Don Juan either died or departed this world in 1973, huh? Having being born in that year, I dig that a lot ;)

Thanks Red Pill! Yes, some tellings avow that don Juan died in 73, so you may be the reincarnation of a very wise man...who may only ever have existed in the imagination of another wise man! (73/74 was a bumper time for weirdness in general, with RAW beginning to receive the Sirius transmissions, and Philip K Dick getting zapped by VALIS in 74, as I'm sure you're aware.)

Although its impossible to say for sure, I tend to think to much, if not all, of Castaneda was fictional per se; but the more I read of him, the more I become convinced that he was a really remarkable, unique writer. You mention Lovecraft in your piece, and I think that is an apt comparison; as the owl episode above illustrates, Castaneda was, among other things, one of America's great practitioner of weird fiction.

Indeed. As I was reading Gary Lachman's excerpt from his book on Madame Blavatsky, it would seem that she too came to fulfill the same role as Castañeda during those first decades of the XXth century --the role of Tricksterish guru ;)

Consequently, the reactions to her as are mixed as with Carlos: some still swear by their teachings, some think they were complete opportunists and charlatans, and there are even some, like you and I, who think that such debates are pointless; for there's still a lot of valuable things to learn of them both :)

I've been meaning to read some of Gary Lachman's books for quite awhile; he always writes about stuff that is very interesting to me.

The fiction/non/fiction divide can be a little nebulous to me at times anyway. A great many fiction writers, often the better ones, write fiction because they find it the most accurate way to reflect reality as they experience it. In this sense, a work of fiction may be no less real a representation of reality than a mathematical equation. Although I remain alert to when my leg is being pulled, I read to stimulate my imagination, and this will always be my final criteria for whatever type of book I'm reading.

It's like in V for Vendetta: a true writer will use lies to tell the truth :)