This Album was Recorded under the Influence of Sahlep: Aphrodite's Child's 666 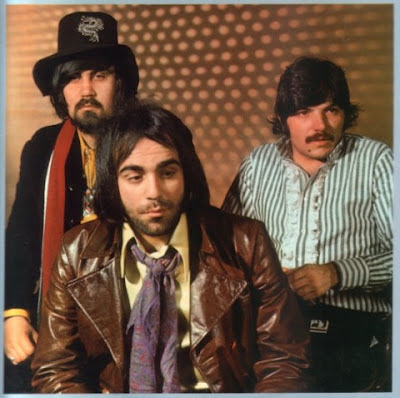 Aphrodite's Child were a Greek progressive rock band formed by the iconic film composer Vangelis in 1967, featuring Demis Roussos on bass and vocals, Loukas Sideras on drums and vocals, and Anargyros Koulouris on guitar. In 1972, they released 666 (The Apocalypse of John, 13/18), a sprawling, magnificent, and occasionally bonkers double concept album based on every rocker/stoner/teenage boy's favorite section of the Bible. Here's a taster:

The album was a hard-sell to the record label suits from the get-go. The track"∞" is an absolutely staggering performance piece in which the Greek actress Irene Papas enunciates the mantra I am, I was, I am to Come, in escalating stages of erotic dementia. It makes The Great Gig in the Sky sound like The Sound of Music. A line in the album's sleeve notes, This album was recorded under the influence of Sahlep, also courted controversy, leading to speculation that the mysterious Sahlep was either a drug, a demon, or some kind of occult ritual. It turned out to be nothing more lurid than a popular Mediterranean drink made from the powdered roots of a specific kind of orchid. Whatever Papas was under the influence of during the recording of "∞" (edited down to 5 minutes from a an original 39 minute take), the reader knows as well as I. You can listen to the entire album below, if you dare:

picture from the magic robot
Posted by Tristan Eldritch at 3:41 PM

One of the greatest albums, an epic feast!!!

Yeah, just discovered this a couple of weeks back, it surely is an epic feast, no doubt! The first time I listened to it all the way through, my mind was blown by the scope, variety, quality, and cohesiveness of the whole thing. It really is a hell of a record.

"The Four Horsemen" is still my favorite track, though, and it was intended to stand out in an otherwise cohesive concept album. It's too bad progressive rock turned into such a wank fest. I blame Keith Emerson...

I like a lot of prog, but yeah, Emerson has a lot to answer for, no doubt.

Just bounced here from your comment at boingboing, yeah! My old friend, Stavros, is a huge prog fan and now I know why. Well, I guess I had my time in the grasp of the prog thing too but it didn't really endure. I did just watch a Yes concert on Netflix that brought me back.

Hey Patrick, thanks for dropping by! You can never fully extricate yourself from the talons of prog.