Shanghaied out of Moving Time and into The Eternal Now: The Psychedelic Art of Burt Shonberg. 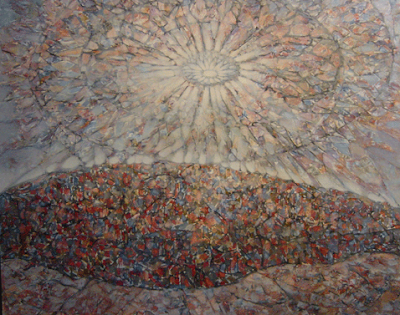 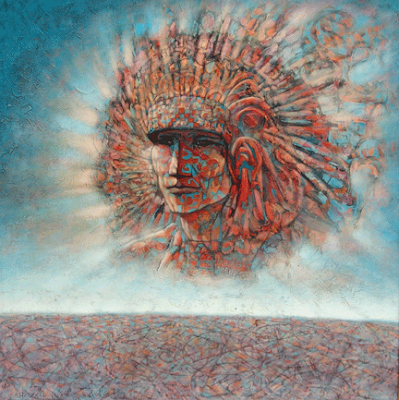 Burt Shonberg was a Californian artist of the post-war/psychedelic eras who worked in a variety of mediums. In his lifetime, he painted various murals adorning LA nightspots, coffee-houses, and restaurants, as well as album covers for Arthur Lee’s Love, and several specially commissioned works that appeared in two of Roger Corman’s classic Poe adaptations: The Fall of the House of Usher (1960) and The Premature Burial (1962). Shonberg is a fascinating character: a true sci-fi gnostic who constantly sought to experience a higher, more exalted reality through the psychedelic experience and the language of science fiction movies and the flying saucer craze of the forties and fifties. 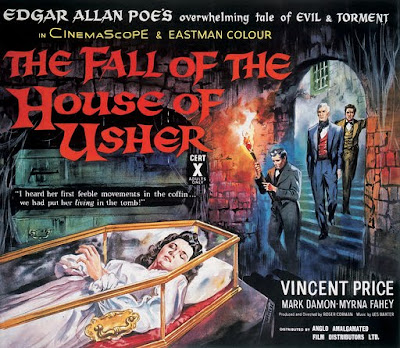 Burt was born in Revere, Massachusetts in 1933, and travelled to Los Angeles in 1957 after doing a couple of years of military service followed by study in the Boston Museum of Fine Arts. In Los Angeles, he first tuned into the strange, mystical currents from beyond that seemed to haunt his life and work. The artist described being routinely hit by VALIS-like beams of illumination:

I had my first dramatic experience beyond the limits of so called ordinary, everyday consciousness. This was not induced by any chemical means or yogic-type efforts on my part, it came by itself and took me by surprize. Every day, for seven years straight, I was hit by a number of widely-separated, monetary blasts of unexpected light. These initial experiences of being unexpectedly and mysteriously shanghaied out of moving time and into The Eternal Now were of such a nature that I saw all the usual, generally accepted notions of what this world is all about as being sheer imagination. (Wormwood Star: The Magickal Life of Marjorie Cameron, Spencer Kansa.)

Between the years of 1958 and ’62, Shonberg was the co-proprietor, along with folk singer Doug Myres and writer George Clayton Johnson (later author of several Twilight Zone scripts, and co-author of Logan’s Run), of a legendary Laguna Beach coffee-house and beatnik “den of inequity” called Café Frankenstein. Decorated by a Shonberg-painted stained glass window depicting the scientific monstrosity and movie icon, Cafe Frankenstein was beloved by a motley crew of beats, surfers, and local teens doubtless in varying stages of Desperation for Kicks. Needless to say, it didn’t play well at all with Laguna’s Square Community. The cafe was first busted for spiking the espresso with brandy, and later for allowing a model to be photographed nude on the premises. It is said that among the regulars were two under-cover detectives who had been dispatched to sniff around for reefer; the two dicks apparently grew to dig the Frankenstein vibes, and became its staunchest supporters. Eventually, the prolonged stand-off with Squaresville came to a head when several ladies from the local Church League marched on the café, claiming that its stained glass window was blasphemous. Burt Shonberg defiantly told the squares to back off, threatening to erect a crucified Frankenstein effigy on front of the café if they didn’t. The squares backed off that day, but it was the beginning of the end of Café Frankenstein. (The whole story sounds like a digression in a Pynchon novel, but it really happened.) 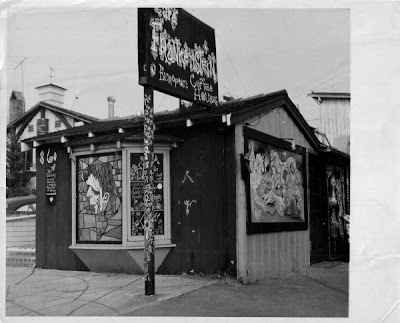 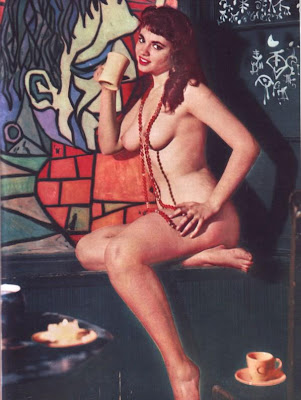 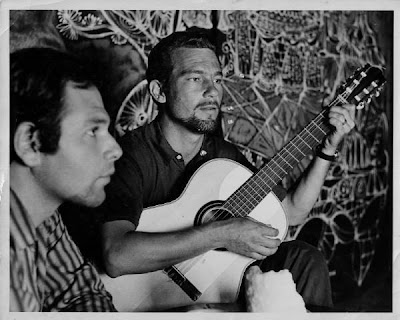 At some point, Shonberg encountered Marjorie Cameron, Jack Parson’s “elemental” partner in the notorious Babalon Working, and a considerable artist and visionary in her own right. The pair lived together for a time in a ranch in the Joshua Tree National Park desert district. Cameron is credited with kicking Shonberg’s mystical tendencies into overdrive, and cementing his fascination with occultism and the new cosmic gnosis offered by the apparent arrival of the UFO. The desert occupied a significant place in the strange and comical saga of the Contactees: George Adamski claimed to have had his first encounter with the Venusian Orthon in the Colorado Desert in 1952; former aircraft mechanic George Van Tassel claimed to have taken his first astral trip on-board a Venusian space ship while mediating near Giant Rock in the Mojave desert. Shonberg met Van Tassel, and, through Cameron, became actively involved in a fascinating subterranean culture that mixed bohemia, occultism, and frequent peyote-aided attempts to initiate intergalactic contact in the timeless, alien wastes of the desert. These strange currents are evident in Shonberg’s fantastic psychedelic artwork, but frequently played havoc with his mental equilibrium. According to his friend, the late actor Dennis Hopper (no model of consistent mental equilibrium himself): “You’d see Burt around all the time, talking to space people or having a conversation with himself while he was walking. He sort of went over the edge.” (Wormwood Star: The Magickal Life of Marjorie Cameron, Spencer Kansa.) 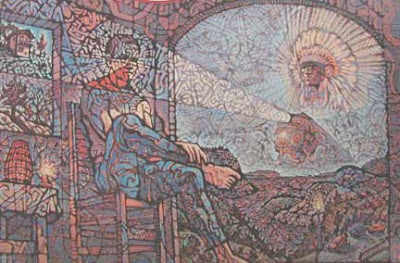 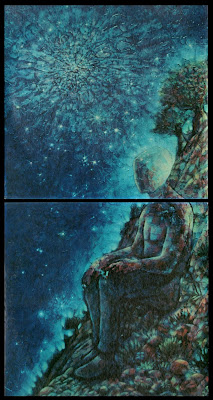 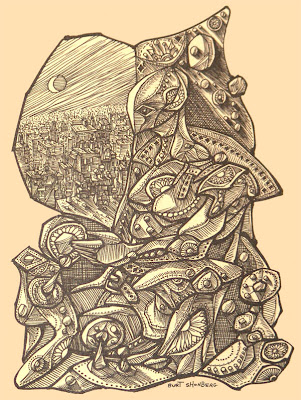 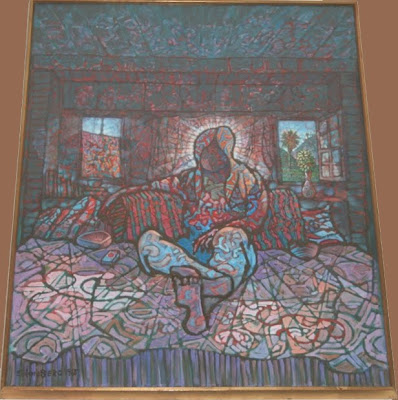 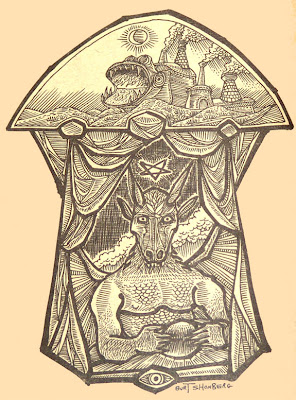 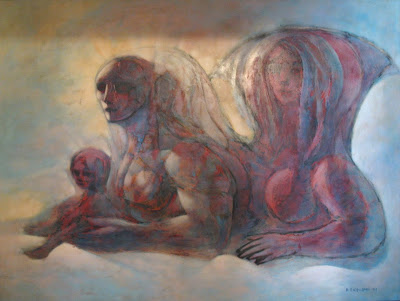 Burt Shonberg passed away in 1977 in the home he shared with fellow artist and sci-fi seeker Ledru Baker, his work having become highly sought after among Los Angeles’ musical and Hollywood elites. The Café Frankenstein continued to be a beat/folkie hang-out under the name 860 Club until 1962, when the land was sold, and the building, including Burt’s murals, demolished; in order, I bullshit you not, to put up a parking lot.

I discovered Burt's work through Spencer Kansa's excellent biography of Marjorie Cameron Wormwood Star (Amazon); the Shonberg and Dennis Hopper quotations are derived from that book, as is the information regarding Burt's relationship with Cameron.
Posted by Tristan Eldritch at 8:55 PM