The Shaver Mysery Part 3: a few years in the absolute elsewhere 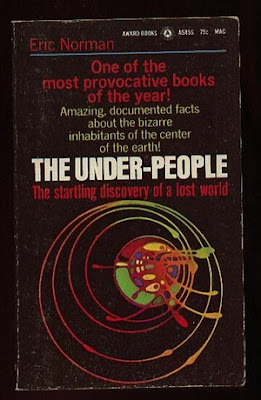 There are five hundred buildings in the United States whose elevators go deeper than the basement.

The Elevator People, by Harlan Ellison.

In The Occult Underground, James Webb coined the term “rejected knowledge” to describe ideas that become unacceptable to the Establishment of a given culture. According to Webb, ideas could fall into the category of occult or rejected knowledge for a variety of reasons: it may be that those who espouse the idea choose themselves to keep it hidden from the masses; or it may be that the idea is too subversive or dangerous for the Establishment to tolerate; or it may be simply that the idea is useless or nonsensical. Rejected knowledge is thus a heterogeneous body of ideas that is united by its opposition to the dominant cultural orthodoxy:

The occult is rejected knowledge: that is, an Underground whose basic unity is that of Opposition to an Establishment of Powers that Are.

Our own era, which places such faith and prestige in the figure of the expert and the idea of quantifiable accuracy, contains a rich underground of rejected knowledge. Like anti-matter to matter, every idea, every discipline, has a veritable army of amateurs, cranks, and occasional visionaries to posit an alternative narrative to that excepted by the orthodoxy. One idea which has assumed a particular pre-eminence in the modern corpus of rejected knowledge is the archetype of the antediluvian civilisation: the idea of a highly advanced pre-historic culture that vanished virtually without a trace, leaving only fragmentary evidence of its existence scattered in the mythologies and cyclopean monuments of the distant past. With the publication of Atlantis: The Antediluvian World in 1882, the Pennsylvania-born Congressman and writer Ignatius L. Donnelly gave an iconic form to ideas which had been stirring at the eccentric fringes of the antiquarian and archaeological communities for some time. After Donnelly, the hugely influential occultist Madame Helena Blavatsky published her account of the “Root Races”, the Hyperborean, Lemurian, and Atlantean progenitors of contemporary humankind that stretch back millions of years before conventional historical records begin. 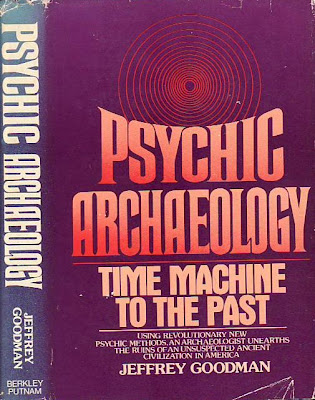 As Louis Pauwels and Jacques Bergier would suggest in their much later Morning of the Magicians (1960), to study the distant past is to spend a few years in the absolute elsewhere. An alternative, occult archaeology was born, and following Blavatsky, Rudolf Steiner, and many others, a detailed account of lost pre-historical civilisations became an integral part of the occultist’s visionary repertoire. To some, these accounts were vouchsafed by speculative readings of the archaeological record; to others, they were the product of mediumistic channelling, visionary trance, and no doubt in a great many cases, pure exuberant fantasy.

In many respects, we can envision Richard Shaver as a pulp magazine descendent of this occult archaeology, although his visions were of a somewhat darker hue than most. According to his dualist cosmology, the universe is composed of two primary forces – positive, integrative energy, known as te or ter, from which all health, youth, and vitality stems, and negative, disintegrant energy, known as de, der, or dis, from which all the destructive, evil aspects of existence derive. Shaver envisioned entropy essentially as a property of der. He believed that our sun was once itself a planet, wrapped in vast coal beds. At some indeterminate point in the distant past, this planetary body was struck by a meteor, and became a sun. In the early eons of its existence, this new sun radiated positive ter energy throughout its solar system. It was during this period that our earth was first colonized – by two vastly ancient space-faring races known as the Atlans and Titans.

They named the colony Lemuria, and lived for many eons in a sublime golden age of prosperity and technological advancement. Among their wondrous inventions: the penetray, a device used to observe events over vast distances; the telesolidograph, a kind of holographic projector; the stim-ray, a kind of laser Viagra that heightened and prolonged sexual pleasure; and the ben-ray, a long-range broadcaster of positive, integrative energy. Awash with ter, the Lemurians were practically immortal, and often grew to the stature of great giants. All golden ages, however, must come to an end. About 20,000 years ago, the sun’s protective “carbon shell” burned away; it now became a degenerate broadcaster of disintegrative, entropic energy. The first response of the Lemurians to this catastrophe was to dig deep underground, and create another world there-in: “tier upon tier of cities, endlessly vast, the home of giants……An area beyond calculation, a maze, a catacomb, a labyrinth….Plane over plane, multiplied forever mile upon mile in depth, endlessly on and on.” The Cavern World was born.

The construction of the Cavern World, however, achieved only a temporary respite from the deadly dis rays. They continued to seep through the earth’s crust, warping the minds of the subterranean Lemurians, until the bulk of them decided to abandon earth altogether. Hence the great majority of our ancestors left the earth centuries ago and went in search of younger, healthier star systems. They left behind a small minority who had been so severely affected by the sun’s detrimental rays that they became selfish, cruel, stunted beings. Some migrated onto the surface, where they evolved into homo sapiens. The Lemurians who remained underground retained the high-technology of the space-faring Elders, but they continued to degenerate until their brains became coated with a film of negative energy, causing their thoughts to run backwards. These Shaver labelled the Abandondero, or “Dero” for short, “Dero” meaning detrimental robot in Mantong. In appearance the Deros were grotesque, if somewhat absurd looking creatures. In “Formula From the Underworld, we are given a description that resembles the later ET Greys in some minor respects: “fearfully anaemic jitterbugs, small, with pipestream arms and legs, huge protruding eyes and wide, idiotically grinning mouths. Super-goofy, I believe modern youth would call them.” 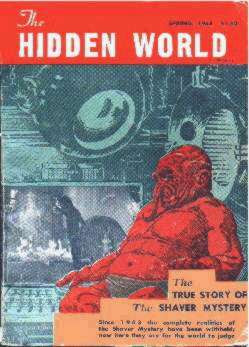 An artist's depiction of the Dreaded "Dero" (detrimental robot). The Deros were not actual robots, but rather had become robotically controlled by detrimental energy.

If the Deros looked goofy, however, their activities were anything but. Deros use their ancient technology to control, or “tamper with”, the minds of surface dwellers. (Shaver hinted that many members of the world’s wealthy and powerful elite had been replaced by Dero-controlled doubles.) The Deros also abduct thousands of surface-dwellers on an annual basis, and subject them to the most depraved and excruciating torture imaginable. Deros enjoyed disassembling their victims, and keeping them conscious for months as living vivisections. Women were turned, by means of “sex stim”, into living furniture, while others were given “growth stimulation focused on breasts til they got enormous and gave milk like a cow which they use for a beverage.” 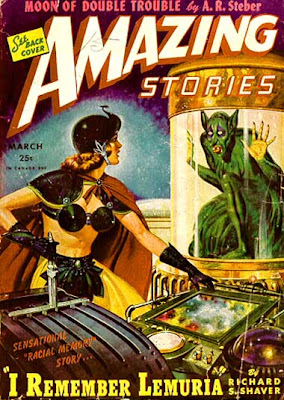 This, then, was the paranoid cosmology and origin myth of Richard Sharpe Shaver. He claimed to know all these things because he had himself been a prisoner of the Deros in the Cavern World for many years. To most people, it would have sounded completely insane. To Ray Palmer, who was equal parts dreamer and magazine huckster, it sounded like the future of science fiction. The March 1945 issue of Amazing featured I Remember Lemuria!, a “SENSATIONAL RACIAL MEMORY STORY By RICHARD SHAVER. (Palmer had initially used the gambit of “racial memory” for fear that printing Shaver’s claims of direct experience might prove too outrageous. Palmer himself wrote the story, having essentially taken Shaver’s ideas and fashioned coherent pulp fiction narrative from Shaver’s grammatically incoherent and often explicitly psychosexual content.) The issue was a sell-out, and the beginning of a phenomenon. As letters began to trickle in seeming to corroborate Shaver’s bizarre tales, Palmer started promoting the mythos as an ostensibly true phenomenon which he labelled the “Shaver Mystery”. In a subtle way, Ray Palmer had become a new kind of entrepreneur – he was selling outré pulp fiction as reality; or, at any rate, as something that might just possibly be real. Before the arrival of the UFO in 1947, there had been nothing quite like the Shaver Mystery.

A great many traditional SF fans were horrified – the Shaver Mystery was as far from Gernsback’s cosy formula of “75% literature interwoven with 25% science” as you could get. But the Shaver Mythos had struck a raw nerve. For the majority of ordinary, well-adjusted people, the world operates by a mixture of human agency and blind chance. People’s actions determine events to whatever degree they can, and beyond that, things simply happen. For a great many marginalized characters, however, the world is a place controlled by sinister, hidden forces – a place of disembodied voices and nefarious, manipulative technologies. Richard Shaver’s fantasies of the Cavern World had become a lightning rod, a strange attractor, for these people, and opened up a subterranean network of paranoid schizophrenia that existed under the radar of ordinary society:

To be continued shortly.
Posted by Tristan Eldritch at 7:00 PM