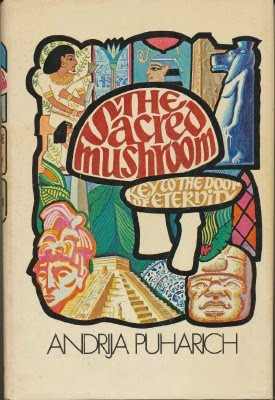 1947.
A lot of strange things happened in the year of 1947. On June 21st, seaman Harold A. Dahl allegedly witnessed six "doughnut shaped" objects flying in formation near Maury Island. Three days later, business man and pilot Kenneth Arnold saw nine crescent-shaped objects flying in a chain near Mount Rainer, Washington. One genius stroke of journalistic short-hand later, and the flying saucer had successfully invaded the collective unconscious. Whatever its ultimate nature, the saucer was frenetically busy in America that summer, as though scattering in fast-forward the fragments of a guerrilla mythology for future generations to re-assemble. On or about July 8, whatever crashed down at Roswell, crashed down at Roswell. One thing is particularly intriguing about the UFO mythology: all its significant elements emerged together in a condensed time frame of roughly 20 days. Maury Island would come to be regarded as the first appearance of Men in Black; the Arnold sighting inadvertently cast the UFO's iconic image in the populuxe architectural forms of the Atomic Age; and the Roswell Incident bestowed to distant futurity the narrative of crashed saucer retrieval and government cover-up. In the post-Watergate era, this splicing of alien DNA with terrestrial conspiracy theory would explode into a cottage industry of alleged insiders, whistle-blowers, and Disclosure lobby groups/cults.

Also in 1947: on July 24, Harry S. Truman signs the National Security Act, radically overhauling the National Security Apparatus, and giving birth to the CIA. (That this should occur within weeks of Roswell is almost certainly coincidental, but a fun fact to conjure with nevertheless. The UFO as a mythical object emerges coeval with two cultural forces: the technological, futurist wunderlust of the postwar period, and the birth of the National Security State in its fully compartmentalised, bureaucratic modern form. Perhaps that is why the Men in Black where there from the get-go.) In the spring of that year, two Bedouin goat-herds who went searching the cliffs along the Dead Sea for a lost goat (or for hidden treasure, depending on which story you believe) chance upon a cave containing jars filled with manuscripts. Fragments of a much older guerrilla mythology: over the next 9 nine years, some 900 manuscripts will be found in eleven caves, including the oldest known surviving Biblical texts. (The history of the Dead Sea scrolls is long and tangled, but interestingly they were advertised for sale in the Wall Street Journal of June 1, 1954. The copy reads dryly that the scrolls would be "an ideal gift for a educational or religious institution by an individual or group".) On December 1, 1947, the notorious British occultist Aleister Crowley passes away in Netherwood, a boarding house in Hastings, apparently of a respiratory infection. Many years previously, Crowley's doctor prescribed morphine for his asthma, and the Great Beast had been addicted to heroin every since. Interestingly, he and his doctor died within 24 hours of each other. Newspapers suggest a lurid, albeit admirably logical hypothesis: the doctor refused to continue Crowley's opium prescription, and the indignant Magus put a curse on him. Alleged last words include Sometimes I hate myself and I'm perplexed, both suggesting a certain degree of self-absorption. 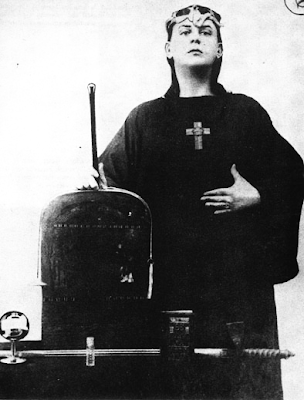 Crowley: My Work Here is Done.
Also in 1947: two future science fiction authors, both with K as a middle initial, graduate from the same high school. They are Philip K. Dick and Ursula K. Le Guin. Also graduating in '47, this time from the Northwestern University School of Medicine, is Andrija Puharich, the man Ira Einhorn would later call "the great psychic circus master of the century." In the subterranean history of the 20th century, Puharich is an elusive prodigy. Before his death in 1995, he would attain the status of a master hypnotist, reach the level of a full "kahuna" in the practise of Hawaiian shamanism, and establish 50 technological patents, mostly in the area of hearing aids. Like all gurus, he would lead an apparently charmed life, facilitated at all times by a shadowy network of benefactors and financiers. A year after graduating, he established the Round Table Foundation, a laboratory to study the physio-chemical basis of paranormal phenomenon. The lab was situated in a barn in Glen Cove, Maine. (This image reminds me, for some reason, of Walter Bishop's basement laboratory in Fringe.)

Puharich's interests in electroacoustic technology and parapsychology were inextricably connected. While in college he developed a theory of nerve conduction; according to Terry Milner, it stated that "the neuron units radiate and receive waves of energy which he calculated to be in the ultrashortwave bands below infrared and above the radar spectrum. Therefore the basic nerve units - neurons - are a certain type of radio receiver-transmitter.” This work brought Puharich to the attention of a variety of scientists, most notably a notorious Spanish professor of physiology named Jose Manuel Rodriguez Delgado.

(Here we must make a slight digression. Jose Delgado's primary research interests lay in the degree to which electrical signals could be used to provoke specific responses in the brain. To this end, he invented the stimoceiver, a miniature depth electrode which could receive and transmit electronic signals over the FM range, as well as stimulating brain waves and monitoring EEG. Disturbingly, an implanted stimoceiver could stimulate emotions and control behaviour in animal and human brains. The good doctor carried out his experiments on cats, monkeys, chimpanzees, gibbons, and latterly human beings. Of one experiment involving mental patients, he observed: "Radio stimulation of different points in the amygdala and hippocampus in the four patients produced a variety of effects, including pleasant sensations, elation, deep, thoughtful concentration, odd feelings, super relaxation, colored visions, and other responses." In one extraordinary feat of showmanship in the Spanish city of Cordoba, Delgado got into the ring with a raging bull which had been surgically implanted with the stimoceiver. Using a remote control in his right hand, he was able to subdue the bull, and stop it its tracks. Delgado's experiments seem to have been inspired by a utopian/dystopian desire to make the world a better place. In his own words, “The individual may think that the most important reality is his own existence, but this is only his personal point of view. This lacks historical perspective. Man does not have the right to develop his own mind. This kind of liberal orientation has great appeal. We must electronically control the brain. Someday armies and generals will be controlled by electric stimulation of the brain.” In 1970, the New York Times Magazine hailed him as "the impassioned prophet of a new psychocivilized society whose members would influence and alter their own brain functions." Like virtually everybody else you will encounter in the Puharich Nexus, Delgado may or may not have been involved in covert CIA mind control experiments.) 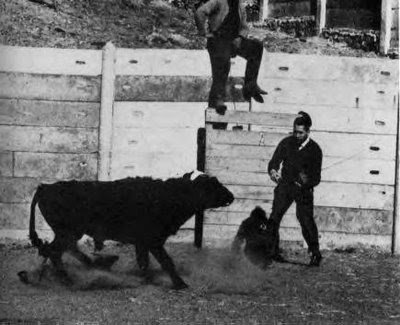 Man versus Brute Nature, in the Psychocivilized Age.
Puharich's primary interest as a college student lay in medicine. In this capacity he carried out research into digatoid drugs, an endeavour which was sponsored, almost inevitably, by Sandoz Chemical Works. (Sandoz has always struck me as a particularly evocative name for the world's first mass producer of LSD; it brings to mind The Wizard of Oz, to say nothing of John Boorman's no doubt lysergically channeled sci-fi opus Zardoz.) In reality, however, Puharich's real passion lay in an exotic extension of his theory of nerve conduction: in the notion of the brain itself as something akin to a radio transmitter-receiver. This was what fuelled the hothouse experimental atmosphere of the Round Table Foundation, and ultimately lead Pucharich to pioneer and pre-empt many of the most significant esoteric preoccupations of the sixties counter-culture and subsequent New Age Movement: ancient Egypt, psychedelic mushrooms, and channelled extraterrestrial communication. In roughly that order. It all seemed to come together in June 1954, when Harry Stone, one of the Foundation's star psychics, went into a deep trance, and began to draw hieroglyphics, and talk excitedly about an underground chamber where a statue of a dog-headed man came to life. He also spoke of a ritualistic drug that separated consciousness from the body, and allowed it to sojourn briefly in the realm of spirits and gods. By '54, the Round Table was already a deeply strange place: various psychics, generals, and even Aldous Huxley had passed through its doors. The sacred mushroom was already a pet obsession of Puharich, and perhaps more remarkably, the gods of ancient Egypt had already been in touch, via a different psychic....

More from the Puharich Nexus shortly.
Posted by Tristan Eldritch at 1:32 PM

I've seen film footage of the bull sequence and it's hard to watch. The bull looks like he's having seizures as the current is applied and maybe that's exactly what's happening. We are strange and cruel monkeys to say the least and if you doubt that just watch Lucifer Rising - Kenneth Anger (1973). Your tastes lean toward the rather odd Mr. Eldritch, but I must admit I sometimes find it hard to turn away.

This is one of the better condensed reads on the subject I have seen. I applaud. I wasn't so overwhelmed I really needed the intermission, either. I would add "Crazy rulers of the world men who stare at goats" (on youtube) by Jon Ronson to the quicky info list. People don't realize the widespread social ramifications of this stuff. New World Order.