The Way Out World of Long John Nebel. 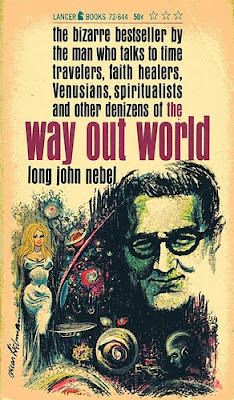 The America of the 1950’s was a joyfully weird place. The rapidly emerging grids of suburban housing suggested a social planners dream – a Norman Rockwell ideal of prosperity and conformity for the age of rockets and tailfins. Meanwhile, the feverish realm of the b-picture suggested a country – or a psyche – which was perpetually at the mercy of a never-ending tide of monsters, mutants, creatures from outer space, and the occasional gang of beakniks. It was an era of phenomenal growth and security on the one hand, and Creatures, on the other, all of whom Came from very clearly specified locations, and all of whom, for very obvious reasons, Had to be Destroyed.
The continuing UFO saga was beginning to yield its first shivers of kitsch spirituality, in the form of the contactee movement. The contactees were a disparate group of citizens all of whom claimed to have met and established a kind of diplomatic rapport with the denizens of flying saucers. The aliens of the early contactee movements came from our solar system – Mars, Saturn, mostly Venus – to preach a treacly gospel of cosmic brotherhood. They were perfectly anthropomorphic, Hollywood beautiful Aryan humanoids, and they came to be known, hilariously, as the Space Brothers. Needless to say, all of these cosmic diplomats were sorely lacking in credibility. Some, however, were worse than others; the aptly named hillbilly contactee Buck Nelson claimed he was unable to see the sun during a jaunt in a flying saucer, because “space was very dark.”

Happily into the midst of this madness came the pioneering broadcaster Long John Nebel. Nebel was born in Chicago in 1911, and it is said he dropped out of school in the eight grade to commit the archetypal act of defiance against the real world – he ran away with a circus. Nebel wound up in New York in the early thirties, working a variety of gigs until he finally established an auction and consignment store in New Jersey called Long John’s Auctions. Show business was never far from his mind, however, and even then he was a flamboyant personality, known as “Long John, the grab and gravel man.”

In the early fifties, Long John gravitated to radio, establishing a paranormal chat show, the first of its kind, at New York’s WOR AM station. Nebel’s programme basically established the template which Art Bell’s Coast to Coast would later follow so successfully – a freeform nite owl radio forum, in which people with bizarre claims and belief systems were given a non-judgemental podium to spin their tall tales. Long John himself was no true believer, describing himself as a curious sceptic; like Art Bell, he realized the extraordinary riches that existed at the weirder end of the free speech spectrum. Nebel’s programme gave a voice to the burgeoning contactee community, as well a dizzying variety of occultists, conspiracy theorists, and cranks, who would otherwise have remained silent in the staid mediascape of fifties America. He also conducted various interviews with Richard Shaver, whose paranoid schizophrenic visions of a race of nefarious underground robots called the Deros became an minor sensation in the late forties.

Alongside his various guests and callers, Nebel’s show frequently had a studio discussion panel. Regulars in this coterie of the bizarre included Arthur C. Clarke, Frederick Pohl, conjurer and sceptic James Randi (the Great Randi), and the Honeymooners TV star they would later call “the Great One”: Jackie Gleason. As well as being an all-around comedic genius, Gleason had a voracious appetite for the paranormal, and was said to possess the largest private library of books on the subject of UFOs in America. At one time, Gleason was offering 10,000 dollars (later a million) to anyone able to furnish him with physical proof of the existence of aliens. (Although the prize was never claimed, some say that Gleason would, in time, be shown the proof he required. More of this in a later post.)

Though a confirmed sceptic, Nebel’s private life would itself become entwined with what he called “the way out world.” In 1972, Long John married Candy Jones, a fashion model who had been a popular pin-up during WW2. Jones had an erratic, unstable personality, and under hypnosis (by Nebel himself) it emerged that Jones may have been a victim of CIA mind control experiments, carried out under the notorious MK-ULTRA programme. These claims remain controversial to this day, but produced a non-fiction book with a pitch perfect b-movie/grindhouse title: The Control of Candy Jones.

Wading in the weird waters that he did, in an era long prior to caller ID, Long John Nebel was inevitably the victim of many pranks and more abuse; however he gave as good as he got, as these clips amply display:


Posted by Tristan Eldritch at 1:37 PM

I enjoyed your post about the great entertainer, Long John Nebel. I remember my parents listening to him in the 70's and I used to listen as well (when I was able to stay up past my bedtime). I now have a couple of cds of his shows from the late 50's and 60's. Do you know where I could find additional recordings of his shows? Thanks!!

Hey, glad you enjoyed it. Sorry, no clue about where to find Long John recordings, best of luck finding them!

Hello! Thanks for sharing this!

I have a radio show where I play old time radio episodes often, so I will enjoy playing this stuff.

Some of it can be found at archive.org .