Beyond the Black Rainbow: File Under "Looks Bloody Interesting". 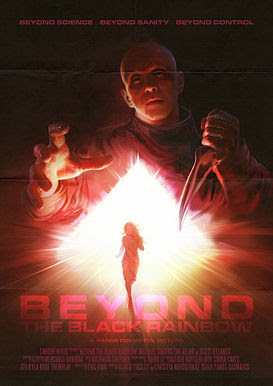 This is a 2010 movie I just heard about today; it dovetails with so many personal obsessions I'm surprised I've never come across it before.  Beyond the Black Rainbow is the directorial debut of Canadian filmmaker Panos Cosmatos.  In his youth, Cosmatos used to hang around a video store called Video Addict.  He was particularly drawn to the horror section, but since he wasn't allowed watch horror movies he had to imagine what the movies were like based on their covers.  Inspired by these notional/imaginary films of his youth, Cosmatos describes one of his goals for Black Rainbow as being "to create a film that is a sort of imagining of an old film that doesn't exist."  The movie has an intriguing melange of influences.  Cosmatos describes his use of colour as being influenced by two films I'm very keen on: Michael Mann's Manhunter and the same director's one of a kind visionary folly The Keep.   Thematically, the shadow of early Cronenberg seems to loom large over the film, and critics have also likened it to 2001, Altered States, and Gaspar Noe's amazing Enter the Void.  I haven't seen Beyond the Black Rainbow so obviously can't say whether its good, bad, or indifferent.  Critical reactions have been extremely mixed.  One thing is for sure, the trailer looks stunning:

Posted by Tristan Eldritch at 12:40 PM

It's bad. Cop-out ending, recycled clichés and about 90% too long. No doubt works better as a trailer.