This is a short piece I wrote awhile back when the first Luhrmann Gatsby trailer surfaced.

While the release of the Luhrmann Gatsby trailer last week elicited a fairly mixed response overall, the overwhelming majority appeared to be dismayed, often to the point of disgust, with the provocative, if not entirely unexpected, aesthetic choices that the trailer highlighted.  Underlying much of the rancour was a sense of broken decorum – a strongly engrained feeling that adapting a classic and a period piece is a highly formal exercise not unlike meeting the queen.  You approach the queen with an air of self-conscious frigidity, and then proceed with the elaborate ritual of courtesies, because that’s how it’s done.  Some of the Gatsby reactions suggested the kind of horror that might accompany somebody tongue-kissing, or even goosing, the queen in lieu of the usual formalities.  While it’s far too early to say, obviously, what kind of picture Luhrmann has fashioned out of Fitzgerald’s hallowed literary classic, it’s worth teasing out some of the attitudes that underlie this sense of decorum regarding literary adaptations and period pieces.

It’s often felt that the chief criteria by which we judge literary adaptations is in terms of their fidelity and faithfulness to the source material.  This is an attitude shared, oddly enough, by literary purists and comic book nerds – though at wholly opposite ends of the cultural spectrum, both share a kind of fundamentalist fervour for the Holy Writ of the source material.  It’s an attitude not without some merit – nobody really wants Gatsby with a sci-fi or zombie twist – but at the same time, it fails to acknowledge that movies and novels are fundamentally different mediums.  All novels worth their salt defy any kind of direct translation to the screen, because they are so rooted in language, and in the specific properties and effects that can only be achieved in the novelistic medium.  Those novels, on the other hand, that do facilitate direct translation are the pulpy page-turners that were never more than fleshed-out film scripts to begin with – Jaws, Rosemary’s Baby, The Godfather, Jurassic Park, and so on – all vastly superior movies than they ever were novels.  The point is that novels and their movie adaptations are not joined at the hip – they are separate entities that deserve to be judged on their own terms and relative merits.  If a perfectly faithful translation of a novel was possible, it would render the source novel itself obsolete – as has essentially happened with The Godfather and the other page-turners.

The Great Gatsby is an unfilmable novel because its essential character lies not in the surface plot, but rather in Fitzgerald’s treatment of it.  In the hands of a lesser author, it could easily have been so much forgettable melodrama, but Fitzgerald – by means of the evocative, suggestive quality of his prose, and unerring sense of what to leave unsaid and un-shown – turns the story into a highly compressed, almost ineffable narrative poetry.  Any attempt to replicate this effect on screen is doomed to failure – even to flesh out any of what Gatsby stirs in the mind’s eye of the reader is to threaten the delicate, tenuous magic by which Fitzgerald maintains the perfection of his small novel.  For this reason, the filmmaker has the freedom to strike out on his own with source material like Gatsby – to create something congruent with, but not slavishly faithful to the original – something that is allowed to breathe in its own cinematic context and its own moment.
This leads to the question of anachronism in Luhrmann’s trailer.  All period movies are anachronistic to a greater or lesser degree.  The idea of a correct way to approach period on film is as illusionary as the perfectly faithful literary adaptation.  How we think period should be approached on film has little or nothing to do with historical accuracy, or the nature of the period itself – rather, our ideas about period decorum are simply the set of anachronisms that have become conventionalised as to how period should be shown on film.  Since the past is only the past relatively speaking, and was the present to those who actually lived it, the most accurate period ambience would feel exactly like the present moment – this is the paradoxical realization that made Public Enemies such a formally bold and contentious film. 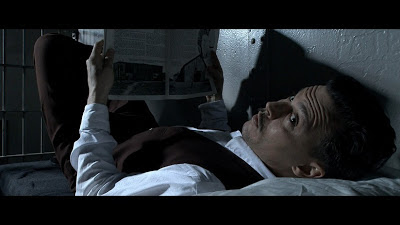 The real irony here, however, is that although Luhrmann has eschewed the frigid and fussy approach to period, he seems to have done so in a way that is conspicuously old-fashioned.  The stylized, almost psychedelic artificiality of the imagery in the trailer seems to me to be much closer in spirit to the lush, painterly artificiality of the Technicolor Era – to the Old Hollywood worlds of Minnelli, Busby Berkley, and Sirk – than to the romanticized realism of the 1974 Jack Clayton version.  The 3D orientation and CGI appear heavily anachronistic to us – only because of our more recent conventionalized appetite for surface realism and verisimilitude in a period or drama movie.  Hollywood in the 40s and 50s made ample use of sound-stages, matte painted backdrops, crazily phony-looking back projection for driving sequences, and so on; artificiality and stylization in a movie like Gatsby wouldn’t have bothered them the way it does us.

Anyway, all this is to say that Luhrmann’s Great Gatsby strikes me as more promising than horrifying.  A restoration of Techicolor lushness and Old Hollywood artificiality – shot through with a brash, energetic modern sensibility – may well be a context in which 3D is actually aesthetically justified and rewarding.  I’m curious to see how DiCaprio acquaints himself with the titular role.  All movie stars who make it really big have a touch of Gatsby about them - a touch of the mystery of having everything and yet remaining unfulfilled – and it will be interesting to see if a star of our generation finally manages to nail Fitzgerald’s elusive shadow at the heart of the American Dream.

Posted by Tristan Eldritch at 6:56 PM

Re:
"Some of the Gatsby reactions suggested the kind of horror that might accompany somebody tongue-kissing, or even goosing, the queen in lieu of the usual formalities."

Oddly enough,the movie is being filmed in Oz (Australia) and it was two former Australian Prime-ministers who infamously "goosed" the queen.

Can't wait to see this movie,by the way.I'm a big Gatsby and
Baz Luhrmann fan.

"Oddly enough,the movie is being filmed in Oz (Australia) and it was two former Australian Prime-ministers who infamously "goosed" the queen."

That's an interesting fact I wasn't aware of! I guess Australians know how to cut through the formalities.