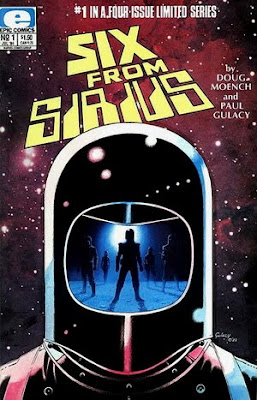 Comic writer Doug Moench tells the following mind-boggling-if-true story of a coincidence he experienced while working on a comic book version of Planet of the Apes:

Moench isn't the only comic book writer struck by weird coincidences. John Byrne's work in the superhero genre seemed to predict catastrophes so frequently that he took to referring to these incidents as "the Byrne Curse":

Now, those things are fairly easy to "predict," but consider these: When working on the relaunch of Superman, for DC Comics, I had the Man of Steel fly to the rescue when disaster beset the NASA space shuttle. The Challenger tragedy happened almost immediately thereafter, with time, fortunately, for the issue in question to be redrawn, substituting a "space plane" for the shuttle.

“Most recent, and chilling, came when I was writing and drawing "Wonder Woman," and did a story in which the title character was killed, as a prelude to her becoming a goddess. The cover for that issue was done as a newspaper front page, with the headline "Princess Diana Dies." (Diana is Wonder Woman's real name). That issue went on sale on a Thursday. The following Saturday ... I don't have to tell you, do I?"


The Narrative of Arthur Gordon Pym of Nantucket.

In 1838, Edgar Allen Poe published his one full length novel, the Narrative of Arthur Gordon Pym. The novel featured an incident in which a whaling ship gets lost at sea, with four crew members remaining. Starved of food and becoming increasingly desperate, the men resolve to resort to cannibalism, and draw lots to see who gets to be dinner. A 16 year old cabin boy named Richard Parker draws the fatal short straw.

On July 25, 1884, a seventeen year old cabin boy embarked on his first voyage on the high seas, boarding the Mignonette in Southhampton, bound for Australia. Somewhere in the South Atlantic, the ship was struck by a hurricane, and sank. A handful of survivors scrambled to a life-boat. After 19 days at sea, provisions ran out, and the crew considered drawing lots to resolve who they might eat. In the end, they decided to kill and eat the cabin boy, who had become delirious from drinking salt-water. They survived on his carcass for 35 days, and his name, needless to say, was Richard Parker.