American History Hex Part 3: the coming of the child of the night 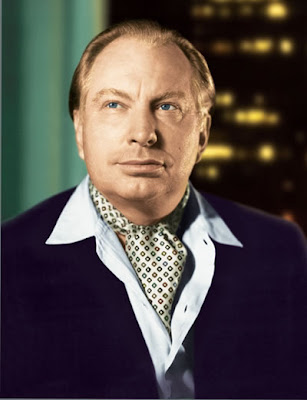 "I have high hopes of smashing my name into history so violently that it will take a legendary form, even if all the books are destroyed. That goal is the real goal as far as I'm concerned."
L.Ron Hubbard.

"Apparently it is the Ordinary Confidence Trick".
How to sum up L.Ron Hubbard, the quick-change messiah of the American Century? Writing in 1957's Fads and Fallacies in the Name of Science, pioneering sceptic Martin Gardner surveyed a "large, good-looking man with flaming red hair" who was already a hugely divisive figure: "To some he is an earnest, honest, sincere guy. To others he is the greatest con man of the century. Still others regard him as basically sincere, with just a touch of the charlatan, and now a tragic victim of his own psychosis." Whichever way the cards fell, Hubbard could unleash a atom bomb of snake-oil when the occasion called for it; his 1950 Introduction to Dianetics: The New Science of Mental Health threw caution to the wind and claimed "The Creation of dianetics is a milestone for Man comparable to his discovery of fire and superior to his inventions of the wheel and arch.....The hidden source of all psychosomatic ills and human aberration has been discovered and skills have been developed for their invariable cure." Today, ardent Scientologists call him "mankind's greatest friend" and describe a figure of "larger-than-life" proportions. The latter of these descriptions is scarcely contestable.

(Some more examples of Hubbard's wayward gift for hyperbole: of 1952's Excalibur: "Mr. Hubbard wrote this work in 1938. When four of the first fifteen people who read it went insane, Mr. Hubbard withdrew it and placed it in a vault where it remained until now. Copies to selected readers only and then on signature. Released only on sworn statement not to permit other readers to read it. Contains data not to be released during Mr. Hubbard's stay on earth. The complete fast formula of clearing. The secret not even Dianetics disclosed. Facsimile of original, individually typed for manuscript buyer. Gold bound and locked. Signed by author. Very limited. Per copy ... $1,500.00."
From the journal of Scientology, 1957: Headline: "Source of Life Energy Found. Scientology enters third echelon far ahead of schedule; revival of dead or near-dead may become possible". Article: "The Greek gods ... probably existed, and the energy glow and potential of Jesus Christ and early saints are common knowledge to every school boy.... The recovery of this energy potential and the ability to use it has become suddenly a matter of two to 25 hours of competent practice." The same issue contains grim warnings about the use of Hubbard's techniques for nefarious purposes, the art of so called "Black Dianetics.")

But Hubbard's story is American through and through. His youth was characterised by the adventure of air planes, Conradian voyages to distant lands, and the rattle of the Great War. His rise was facilitated in part by wholesome staples of the American Dream: the verbal dexterity and charming ingratiation of the high-energy salesman and politician; the visionary entrepreneur who goes out into the wide world and weaves a golden egg out of Eskimo ice. Two other, more exotic cultural forces provided the backdrop for Hubbard's assault on history and notoriety. The first of these was the small but increasingly virulent subculture of pulp sci-fi authors and devotees that mushroomed in the United States in the thirties and forties. Though little noted at the time, the emergence of science fiction fandom was an early precursor to the obsessive cultural cliques and cults that are commonplace today. Enthusiasts of the pioneering pulp magazines arranged themselves into groups such as the New York Futurians (1937 - 45) and the Los Angeles Science Fantasy Society (1934 - present). Though essentially innocuous, these groups nevertheless had a vaguely subversive air; the Futurians, for example, included many communist and Trotskyite sympathisers in their membership. Crucially, the extended fandom community would provide the testing ground and initial market place for dianetics in the early fifties.

The second factor was the extraordinary public fascination with psychoanalysis that developed in roughly the same period. Just as the pulps depicted the invasion of planet Earth by aliens in a variety of rocket ships, America was being invaded by alienists who were carrying off increasing numbers of Earthlings on their Freudian couches. According to Jay Stevens in Storming Heaven, "there was no one explanation for psychology's postwar emergence as a serious discipline. Part of it was just the normal drift of science, the accumulation of theory and experiment, the attraction of capable minds to a new endeavour. But part of it was also the way war and revolution had shattered the serene rationalities of the Victorian and Edwardian eras. The fact that a hundred thousand men had died quibbling over a few yards of mud one day in 1916 had gone a long way towards popularising the theory that our mental equilibrium was constantly being tested by what the ancients would have called inner demons, but which this new science was calling the unconscious."

Ultimately, Hubbard's genius was to recognise that psychiatry's implicit assumption of a precise science of the unconscious could be combined with the iconography of sci-fi to produce a new, mass culture gnosis-on-demand religion. Way back in '45, however, he was an obscure figure known only in fandom circles as a unusually prolific author. Between 1933 to '38, Hubbard wrote 138 novels, and it has said that in the heyday of his pulp career he was operating under about 15 separate pseudonyms, cranking out titles such as Sea Fangs, Man-Killers of the Air, and The Carnival of Death. Friend and fellow hack A.E. van Vogt describes a veritable pulp fiction steam engine, "writing about a million words a year, straight on the typewriter at incredible speed. My guess was that he typed about seventy words per minute. I was in his apartment a couple of times when he said he had to finish a story, and he would sit typing steadily for twenty minutes without a break and without looking up. That would have been totally impossible for me." (Dianetics itself stands alongside On the Road as one of the great marathons of speed typing in American letters, cranked out in three weeks on a electric IBM typewriter with special keys for common words like "and", "the", and "but", and the paper on a roll to avoid breaking to change sheets.) 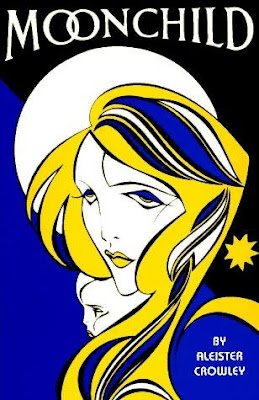 The Coming of the Child of the Night.
In August 1945, Hubbard found himself at 1003 South Orange Avenue, Pasadena, Jack Parsons' increasingly chaotic, commune-like mansion, then nicknamed the "Parsonage". Parsons was immediately impressed, writing to Crowley: "About three months ago, I meet Captain L. Ron Hubbard.....although he has no formal training in magick, he has an extraordinary amount of experience and understanding in the field. From some of his experiences, I deduced that he is in direct touch with some higher intelligence, possibly his Guardian Angel. He describes his Angel as a beautiful winged woman with red hair whom he calls the Empress and who has guided him through his life and saved him many times. He is the most Thelemic (as in self-willed) person I have ever met, and is in complete accord with our own principals."

Hubbard moved into the Parsonage, and the pair quickly formed a John Dee/Edward Kelly-style magickal partnership. By this point, Parsons had his own designs on storming the citadel of history, and those designs took the shape of an ambitious, albeit deeply puzzling ritual known as the Babalon Working.

As we discussed in the last post, a significant element of the eschatology of the Aeon of Horus was the mating of the Beast with the Scarlet Woman, or Babalon. Crowley's text had predicted bloody wars and upheavals for the twentieth century ( "I am the warrior Lord of the Forties: the eighties cower before me and are abased. I will bring you to victory and joy: I will be at your arms in battle and ye shall delight to slay"), but these were the violent, rather than redemptive and liberating manifestations of the Aeon. From his writings, its clear that Jack envisioned the Babalon entity as a necessary counterbalance to the destructive potency of Horus: "This force is completely blind depending upon the men and women in whom it manifests and who guide it. Obviously, its guidance now tends towards catastrophe. The catastrophic trend is due to our lack of understanding of our natures. The hidden lusts, fears, and hatreds resulting from the warping of the love impulse which underlie the natures of all western peoples have taken a homicidal and suicidal direction. The impasse is broken by the incarnation of another sort of force called BABALON. The nature of this force relates to love understanding and Dionysian freedom and is the necessary counterbalance or correspondence to the manifestation of Horus."

The purpose of the proposed Working was to kick-start the Thelemic apocalypse by incarnating Babalon into history and the physical world. Jack was writing himself into the eschatological drama, in the role of the Antichrist, or Beastly paramour to the Scarlet Woman. The initial stages of the ritual were designed to attract an "elemental", or a sexual partner with whom Jack could ritualistically conceive a "Moonchild." As described in a novel of the same name by Crowley, a Moonchild is basically a physical child whose identity is not a matter of normal genetic inheritance, but rather of an astral spirit or entity which has been incarnated into the child. According to Jack Rydeen, "the purpose of Jack's operation has been underestimated. He sought to produce a magickal child who would be a product of her environment rather than her hereditary. Crowley himself describes the Moonchild in just these terms. The Babalon Working itself was preparation for what was to come: a Thelemic messiah." 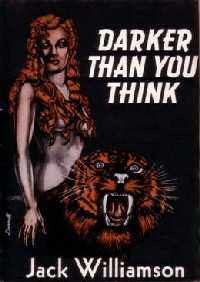 Once again, we find the hand of pulp science fiction at work in Jack's peculiar obsession with Babalon. In 1940, Unknown published a novelette called Darker than You Think by Jack Williamson. In Darker, a reporter called Will Barbee discovers the existence of a hidden society of shape-shifting werewolves who masquerade as normal people. The werewolves (homo lycanthropus) had been defeated by human beings in a prior epoch, and wait in the shadows for the coming of the Child of the Night, a promised messiah who will re-instigate their supremacy. The novel features an alluring redhead called April Bell; according to Parsons biographer George Pendle "the story's description of a scarlet-haired woman riding a great beast recalled Crowley's own personal mythology, and the tale of Will Barbee seems to have captured Parson' imagination because it resonated with his own awakening fervour for the OTO." Darker than You Think was thus one of many factors, which may also have included his Oedipal complex, which consolidated Jack Parsons' overwhelming preoccupation with the Babalon archetype.

Jack and Hubbard set about summoning the elemental. They worked for 11 days, but to little avail. Then on the 17th day, Jack and Ron went out into the Mojave desert, and Parsons records the following: "Whilst the scribe and I were in the desert, the feeling of tension suddenly stopped. I turned to him and said "It is done", in absolute certainty that the Operation was accomplished." When Jack returned to the Parsonage, he found a new face on the scene: the beautiful, flame-haired, green-eyed Marjorie Cameron. Followers of the 23 Enigma take note: Parsons wrote "I have my elemental!" in a letter to Crowley, dated the 23rd of February. Marjorie Cameron was 23 when she met Jack. She was born on April 23rd, 1922, and died on July 23rd, 1995.
To be continued.

Posted by Tristan Eldritch at 3:21 PM

And of course there is the Kenneth Anger connection...Jeez! The world we inhabit is even stranger than we imagine or can imagine.

I await the next installment.