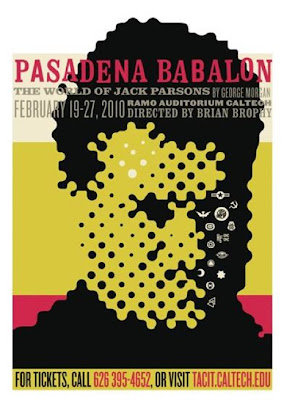 Now ye shall know that the chosen priest & apostle of infinite space is the prince-priest the Beast; and in his woman called the Scarlet Woman is all power given. They shall gather my children into their fold: they shall bring the glory of the stars into the hearts of men.

Aleister Crowley, The Book of the Law.

God's Stone Witness.
Hailing from Pittsburgh, Pennsylvania, Christian Restorationist minister Charles Taze "Paster" Russell was the founder of the Bible Student Movement, from which would later emerge those dogged proselytisers of the doorstep the Jehovah Witnesses. Between 1912 and 1914, he produced a epic eight hour religious roadshow entitled The Photo-Drama of Creation, innovative in its day for combining synchronised sound, moving image, and magic lantern slides. The Photo-Drama presents the Seven Days of Creation as a master key to the history of humankind, and a providential pattern still unfolding through history. (Sample quote from the Photo-Drama's lengthy eschatological discourse: "Surely we can agree to this, as we look over the bloody pages of history: the world has been under beastly rule, even though the best it was able to provide for itself, and though much worse conditions could be imagined, for instance: ANARCHY!".) 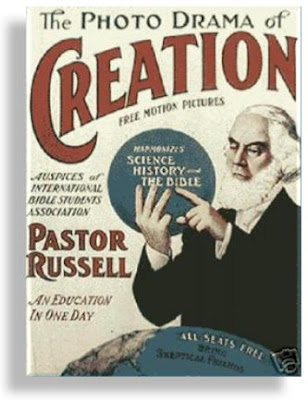 Paster Russell's eschatogical beliefs were unusual, however, in that they located the source code of the ongoing apocalyptic drama not merely in the Bible, but also in the somewhat more exotic locus of the Great Pyramid of Giza. Russell followed a particular strain of Pyramidology which began in 1859, when book-seller John Tylor speculated that the pyramids may actually have been built by the Israelites, and possibly even Noah himself, under divine guidance. This in turn inspired Charles Piazzi Smyth, Joseph Seiss, and later Russell himself, to ascribe the construction to the Hebrews, and regard the great pyramid as the "Bible in stone."

Using a complex system of correspondence between pyramidal inches and chronological dates, Russell made a variety of prophecies, many of which were later subject to revision. We note all this simply to draw attention to an interesting coincidence: Russell predicted that the apocalyptic era would commence in 1914, specifically on October 2. In 1914, Russell himself was schleping his Photo-Drama of Creation around the world, Europe was kicking World War I off, and on October 2, Marvel (later Jack) Whiteside Parsons was born in Pasadena, California. 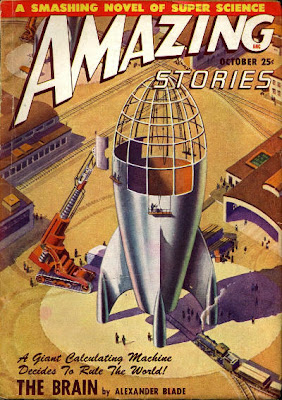 Thrilling Wonder Stories.
Encapsulating rockets, occult rituals, beautiful bohemians, doomed genius, and the birth of science fiction itself, the story of Jack Parsons is an extraordinary slice of stranger than fiction pulp history - yet another reminder that as weird as the mythologies of the twentieth century would get, they remain commensurate, even shy, of the real historical undercurrents that produced them. What remains most striking about Jack was his ability - for a time, at least - to successfully straddle two diametrically opposed worlds: the daytime world of official, military-funded science, combined with a nightside existence in the outer reaches of mid-century bohemia and occultism.

Jack was born and grew up in "Millionaire's Row", Pasadena. His parents were well-off, well connected, but separated and dysfunctional. His mother lavished attention on her son, and instilled in him a hatred of his absent, philandering father. In young Jack's precocious mind, this rejection of his father flourished into a smouldering disdain for patriarchy and authority, and a sense - prophetic in many regards - of the cathartic, constructive power of rebellion. (According to Robert Anton Wilson, Jack "diagnosed himself as having a classic Oedipal complex, a compulsive antipathy to "Patriarchy", and an equally intense loathing for any and all Authority symbols, especially God the Father.")

It's difficult to say to what degree Parsons gravitated toward the occult in his youth, but in later writings he recalls evoking Satan at the tender age of 13. Feminism, diabolism, rebellion - we have all the later hallmarks of Parsons' adult life - all but one. The adventurous potential of science and technology were mediated to Jack through a medium which was itself suffused in magic, transgression, and an air of the futuristic. His adolescence coincided with an explosion in the popularity of the pulps - the twenties and thirties were an era in which Amazing Stories, Thrilling Wonder Stories, Marvel Tales, and countless other periodicals were selling up to a million copies per issue, and feeding the feverish imaginations of the future. As Parsons biographer George Pendle argues, the passion for magic and rockets was united by "their mutual rebellions against the very limits of human existence". While the best most of us might hope for is to someday write the kind of fictions that inflamed our youthful imaginations, Jack Parsons seems to have resolved to live them.
Moving into adulthood, Jack's formal education remained limited. He had spent two years at the University of Southern California, but never graduated. The halcyon days of jet propulsion research were poorly funded, and characterised by a degree of reckless gypsy romance. Jack worked with a group of five young partners (including the painter/aeronautical engineer Frank Molina) which came to be nick-named the "Suicide Squad". According to Pendle again: "With no official funding they had to pay for every bit of material they needed out of their own pockets. They scoured junkyards for tube ends and pressure gauges and stripped old ovens bare for dials and piping." In '36, Parsons joined the Guggenheim Aeronautical Laboratory, where he encountered his mentor Theodore von Karman.

Meanwhile, the same dark historical forces which had converged upon Jack's birth were re-emerging to endow his visionary hobby for rocketry with a pointed official impetuous. Europe was gearing up for war again, and in 1937 work started on Peenemunde testing grounds in Germany, with Werner von Braun as its technical director. Like Jules Verne's submarine before it, the arc of the rocket was emerging from the pulp imagination and into the reality of the European War Theater. Exhibiting an intuitive genius for chemistry that evoked the historical mystique of the alchemist, Jack was responsible for path-breaking work in the field of solid fuel jet propulsion, leading to the development of JATO (Jet Assisted Take Off) which ultimately facilitated the Minutemen and Polaris rockets. By now an increasingly wealthy man with security clearances, Parsons and his fellow suicide squanders formed the Jet Propulsion Laboratory. All this, however, was only half the story. There is a tradition in JPL today to eat "good luck peanuts" before a critical mission test. Parsons, on the other hand, would always begin a rocket test by intoning the Hymn to Pan, by Aleister Crowley:
Thrill with lissom lust of the light,
O man ! My man !
Come careening out of the night
Of Pan....

Parsons' rise in the world of aeronautical engineering was mirrored by his ascent in the Los Angeles occult and general weirdness scenes. A keen adherent of Crowley's philosophy of occultic self-realisation Thelema, he joined the OTO Agape Lodge in Pasadena in 1941. Crowley associate Jane Wolfe describes a distinctly glamorous figure: "26 years of age, 6' 2'', vital, potentially bisexual at the very least, University of the State of California, now engaged in Cal Tech laboratories developing "bigger and better" explosives for Uncle Sam. Travels under sealed orders from the government. Writes poetry - "sensuous only"- he says." Parsons was also a key figure in the burgeoning pulp sci-fi/fantasy scene. According to Robert Anton Wilson, he "entered a subculture in which no idea seemed to crazy to discuss: a world where established science, fringe science, pseudo-science, philosophic speculation and the visionary imagination all ran wild - in short, a world which anticipated and helped generate the "weird and kooky" ideas which have now infiltrated every aspect of our culture." Parsons' inherited Pasadena mansion became the unfettered epicentre of all this weird futurism. Visitors describe a perpetual saturnalia of nude and costumed figures engaging in various permutations of magickal and amorous abandon. It wasn't exactly what Uncle Sam had in mind when he asked for bigger and better.

At this point, you might rationally assume that Parsons' life couldn't get any stranger. But you would be wrong. Enter science fiction scribe, Navy man and member of the Explorers Club Captain Lafayette Ronald Hubbard. 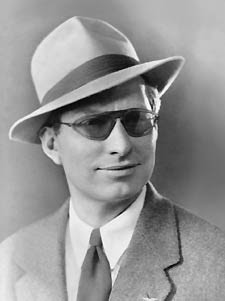 To be concluded shortly.
Posted by Tristan Eldritch at 4:21 AM