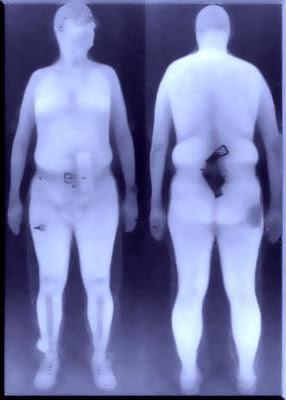 Of all the things that were instrumental in how we conceived of the world in modern times, and how we thought of the modern world itself as an abstract entity, few were as instrumental as the experience of travelling in an airplane. Of all the things that distinguished the modern from the ancient world, it is arguable that communications technology and air travel alone constituted the real transformation. McLuhan's infamous coinage "the Global Village" was primarily justified by developments in those two spheres. When we talked about the modern world, we talked about a place in which you could speak to anybody, anywhere in the world, instantaneously; a place where you could be virtually anywhere in the world in the matter of hours, via the complex global grid of airline companies, airports, air-traffic-controllers, meticulously co-ordinated air-traffic routes, pilots, air-stewardesses, and the impossible dream machines themselves, moving serenely above the clouds. My mind surrenders to rapture whenever I think of this vast grid in the days when it was fully operational. Surely it was a miracle, to first conquer gravity, to ascend to realms so deified in our minds as to function as metaphor and avatar of the supernal heavens; and then to transform this reckless miracle flight into a finely-tuned, harmonious express-way of perpetual motion and exchange. Like a miniature crystalline clockwork, those planes traversed the ancestral skies, bearing an endless freight of human and commercial cargo to their bustling docking stations scattered across the earth. (In my mind, the constant traffic between the old airports has always resembled the stream of life itself - the movement of localized variation across a wider path which is itself unchanging, timeless - the stewardesses and pilots somehow above the stream, intermediate, like angelic hosts who maintain the machinery by which the unique journey is repeated an endless amount of times. Such is the extent to which I have romanticised the halcyon days of commercial aviation.)

The sky and the airplane were both faster and safer than the open road and the automobile. The sky, as a resource, was hotly contested; yet it was divided up and shared between its competing prospectors in a manner never matched in the terrestrial sphere, where the limited planes of ocean and earth were a constant source of possessiveness and conflict. Viewing the world from the vantage point of the airplane elevated the perspective of the passenger, in a variety of subtle ways. The ability to move briskly between equatorial hemispheres, to travel back and forwards along alternate time-zones, to sample the multi-faceted gestalt of alien cultures and landscapes, also engendered a slow and incremental transformation of human consciousness. It was weaning us away from the embryonic tethers of insularity and tribalism, and initiating us to our true patrimony as citizens of a unitary planet, poised on the threshold of the greater fight that awaited us. This transformation was such that the atrophied old powers could only continue to propagate the legitimacy of their wars by virtue of manufactured panics, and could only soldier those wars on the backs of the impoverished and uneducated. The airports themselves were microcosms of the wider world around them: globalised, de-territorialised, multilingual no-places (the real meaning of the word "utopia") of buzzing activity and perpetual motion and renewal.

The freedoms of easy and convenient air travel were not to endure into our current period, however. The first attempted aircraft hijacking occurred on February 21, in Arequipa, Peru. It was a comical rather than portentous event. Flying from Lima in a Panagra Ford Tri-motor, pilot Byron Rickards was greeted on the ground by a group of armed revolutionaries. Rickards was told that his plane was being commandeered in the name of the revolution, and he was to follow their orders. Byron Rickards - perhaps dimly aware the dreams of the twentieth century themselves were at stake - simply refused to comply with the hijackers, and held them in a stalemate for ten days. The hijackers relented, informing Byron that the revolution had been brought to a successful conclusion, and he was free to return to Lima - so long as he gave a lift to a member of their Junta.

Hijackings didn't really gather momentum until after WW2, and then only slowly. Between 1948 and 1957, there were altogether only 15 hijackings around the world. At this point, the practise was most commonly utilised to flee harsh communist regimes in the Eastern Block countries, and later Cuba. In the sixties, an increasingly paranoid Kennedy administration choose to celebrate Cuban hijackings as victories, welcoming the perpetrators and allowing American courts to distribute the proceeds of the confiscated aircrafts among companies and individuals who were owed money by Cuba. This stance, essentially an official sanction of air piracy, was short-sighted and disastrous in its consequences. The latter years of the sixties saw a massive exponential increase of hijacking, jumping from 38 in 1968 to 82 in 1969. On august 3 1969, a Boeing 747 was flying over the Gila River Valley, on a routine Continental Airlines run from Los Angeles to Houston. Suddenly, a air-stewardess was held at gun point by 17-year old Cody Bearden. Bearden's father Leon, a unemployed auto salesman from Coolidge, Arizona, also produced a revolver, and said "We are going to take this plane to Cuba. Alter your course 45 degrees south." Bearden was a notorious malcontent with a seething disdain for the American government; he planned to renounce his citizenship in Cuba. The pilot, South Dakota-born veteran Byron Rickards had seen it all before - the revolution is never brought to a successful conclusion.

Of course, the initial catalysing event behind the great slow down of commercial aviation was the September 11 attacks on the World Trade Centre complex in 2001. The symbolic power of this traumatic event cannot be over-estimated. The airplane, a primary avatar of globalized modernity, is launched as a missile against the Manhattan skyline, itself a vista archetypal to the sky-reaching dreams of the twentieth century. Nor did the attacks evoke the Pearl Harbors of the past, seeming to emerge instead from America's own hypnagogic reveries of large scale urban disaster, ritually enacted on the dreamspace of the movie screen. Like Dealy Plaza on a grander scale, September 11 threw sections of the American population down into a vast paranoiac underworld, subject to flashes of dark gnosis amid formless cul de sacs of static and digital noise. The towers endlessly repeated their brisk collapse in numbed minds and on computer monitors, as though America could only be reborn, and free to resume its destiny as the nexus of the world's dreaming, through a full recapitulation and understanding of the traumatic event. The conservative American majority, equally paranoid, capitulated fully to the State's assurance of renewed security and pre-emptive vengeance, ushering in a grim era of illegal wars and Stalinist domestic policies. Thus the first real spur to the great slow down was the emergence of open source guerrilla warfare, an enemy which replicated the de-centered, impossibly interconnected chaotic system of the global entity itself. Like the dreams represented by the airplane and the airport, the new enemy had no patch of soil, no uniform, no distinct identity to codify itself within the chessboard parameters of classical warfare. It had taken on the qualities of branding, and horizontally organised franchising; like everything else, it moved across incorporeal networks that defied traditional boundaries. It was a rhetorical gift to military/industrial conglomerates that secretly dreamed of eternal, abstract warfare. 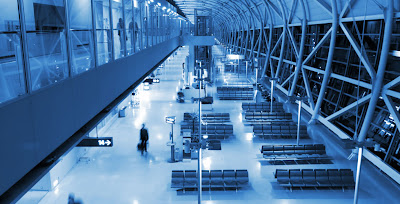 The airports began to reflect these realities. The changes were subtle at first, and appeared natural enough under the circumstances. In November 2001, President Bush signed into law the Aviation and Transport Security Act, establishing a new Transportation Security Administration (TSA). Passengers and baggage were rigorously screened, slowing down the process of flying to a degree little above that of a nuisance. Security was tightened at every level. Yesterday's miracle last minute boardings, once the saviour of many potential travel disasters, were memories of a lost, fossilised world. With its pristine glass geometries, and its giddy throngs carried down escalators to the waiting ramps of lengthy mobile concourses, the airport has always possessed an ambience of science fiction, and the imagined futures of the past. Now with surveillance cameras, biometric passports, restricted liquids, eye-scanners, and latterly full body scans, it came increasingly to resemble the nightmare parameters of the dystopia. It was slowly becoming the microcosm of a new world.

The second major spur to the great slow down was the subterranean development of a new science. The possibilities of psychological grafting extend back to the shadowy days of the Cold War and the MK-ULTRA programme. Scientists on both sides of the Iron Curtain become fascinated by the prospect of creating artificial memories, and grafting them seamlessly into the mental baggage of test subjects. The earliest successes involved the implantation of a traumatic situation, usually an alien abduction/examination scenario, into the memories of unwitting test subjects. The scientists involved in this covert project discovered something completely unexpected. The implantation of a single alien abduction memory acted like a virus. Creating copies of itself, the artificial memory would retrogressively alter the entire past of the test subject, inserting sophisticated variations of the basic scenario at various points throughout the person's life. According to Professor Alfred Blanchard of MIT: "It seems to be a property of memory not merely to record, but to organise its contents into cohesive blocks. It may be, for example, that every time a person thinks of a cat, he is activating a specific memory block or chain, which incorporates that person's initial learning of the concept and appearance of a cat. In fact, it may be that higher level cognition is entirely dependant on this capacity to summon discrete memory blocks instantaneously and unconsciously. Every time you think of something, you are activating every memory you have of that thing, and processing all the information at lighting speed to produce a highly complex, specific impression of that thing in the present tense. Hence, artificial memory grafts throw the memory's central processor into disarray; they give it information which has no linkages or chains in the wider system. Now we are aware, in the case of Charles Bonnet syndrome, that when the optic pathways become less able to process visual stimuli coming from without, the brain or optic system somehow invents visibilia to fill in the blanks, which the sufferer experiences as very vivid hallucinations. This process of filling in the gaps is echoed in Phantom Eye syndrome, where patients who have lost an eye experience pain and occasional hallucinations in the absent organ, and in Musical Ear syndrome, where hearing loss is sometimes accompanied by auditory hallucinations. Now memory does something inherently similar. It adds a recursive chain or block to the grafted memory, which the subject incorporates seamlessly as memory or prior lived experience."
Continued shortly.
Posted by Tristan Eldritch at 2:51 PM