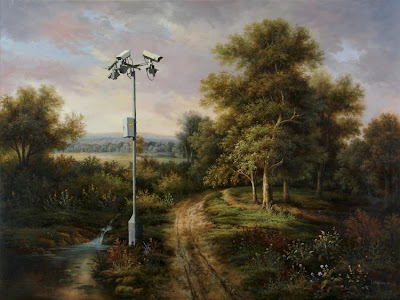 Jon Ronson is a highly successful British journalist who has carved out something of a niche for himself documenting the shadow world of fringe belief communities for a sardonic middle-class audience. Developing a style which mixes the participatory character of Gonzo journalism with a particularly British sense of self-deprecatory humour, Ronson's most successful works include The Men Who Stared at Goats, an exploration of the US military's study of New Age and paranormal techniques, and Them: Adventures with Extremists, a picaresque account of his experiences in the company of individuals such as David Icke, Randy Weaver, and Alex Jones. (A movie version of The Men who Stared at Goats, with George Clooney, Ewan McGregor, and Kevin Spacy, is slated for a November release, while Universal and Jack Black have apparently bought the rights to Them.)

Ronson's take on fringe topics is a little too sardonic, commonsensical, and basically sane for my liking, but he has done some good work, including infamously infiltrating the New World Order summer soiree Bohemian Grove with Texan conspiracy firebrand Alex Jones. Way back in 1998, Ronson hosted For the Love of....Big Brother on Britain's then edgy and alternative Channel 4. Airing well into the late night/early morning stoner slot, For the Love of.... basically gathers a motley panel of remote viewers, spook-watchers, and etheric healers, to discuss the New World Order, microwave weapon technology, remote viewing, and advanced surveillance techniques. While most of these topics are quite familiar to today's paranoia saturated culture, to a random pre-9 11 audience of insomniacs and students, this must have seemed like pretty mind-blowing stuff. I love the little details that date the programme – Ronson smokes throughout, which just never happens in panel TV today, and the panellists quaintly regard mobile phones as solely the preserve of the wealthy upper class. (Tune into Channel 4 late at night today, and you are likely to be transported into the sickly retro-futurist design of the Big Brother "reality TV" house, an annual media event that turns the constant surveillance state, and the dystopian nightmare imagery of the twentieth century, into fetishistic mass entertainment. Strange times.)

Posted by Tristan Eldritch at 7:35 AM