The Secret Life of Hoaxes. Part 2. 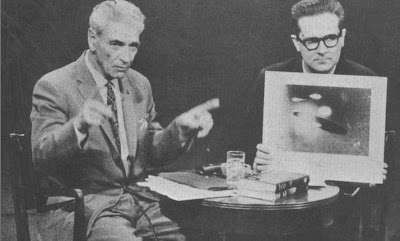 Most hoaxes are crudely executed, and are revealed as such with relative ease and brevity. In other cases, we find varying degrees of ambiguity. Some hoaxes start out as a genuine phenomenon, and gradually stoop to fakery when a particular demand develops for a miraculous font which has ran dry. Other hoaxes may have kernels of truth scattered within their myriad falsehoods, which remain fundamentally difficult to disentangle; as we argued in a much older post, disinformation operates on a Cretan liar basis of truth and falsehood mixed together in a subtle and almost indivisible fashion. Strangest of all are those cases of obvious, blatant hoaxes which nevertheless seem to have weird, ripple effects that create a degree of ambiguity/irresolution. A good example of this is the Santilli alien autopsy film; it was plainly a fake made in the nineties, yet a variety of military insiders confided to researchers that they remembered seeing the film back in the sixties.


The point of all this is that hoaxes exist in a slippery space that tends to unseat, even if only in minor ways, the most crucial of our logical/ontological binaries. Consider the example of Carlos Castaneda's infamous Yaqui shaman Don Juan Matus. Beginning with The Teaching of Don Juan in 1968, Castaneda wrote some twelve books which purported to detail his training at the hands of the alternately humorous and severe sorcerer. The books were best-selling trailblazers that influenced a generation of seekers, largely introducing the shamanic revival and concepts of alternate realities to the nascent New Age movement. But was Don Juan even a real person? Today, nobody really knows for sure if the Don Juan cycle of books are literal biography, partially fictionalized, wholly fictitious, or a conscious and deliberate allegory that aims to express a philosophical truth in the manner of Plato's dialogues. (A similar uncertainty principal surrounds Whitley Strieber's narratives of encounter with non-human intelligence which began with Communion.)

Imagine, for example, that you came into possession of a painting by an Old Master, and cherished it for decades. Then, suddenly, after about a decade or so, it is finally revealed to you that the picture is a fake. Immediately, your whole perception of the painting changes. Are all your years of appreciation and pleasure invalidated by this sudden awareness of the painting's origins? (Are any insights you might have gleaned from Don Juan, whom you only ever experienced as a disembodied spirit mediated through paper and ink, invalidated by the possibly that he never existed outside of that paper and ink?) What is the ontological status of the painting in relation to you if its forgery is only discovered after your death?

While this may seem like cheap sophistry, it relates to the manner in which categories construct our realities. (The painting itself hasn't changed, only its status with regard to the symbolic system whereby the merit of the picture is judged. In a society where ingenious forgery was esteemed, the possession of an original would be a gross disappointment.) In the elaborate Christian geography of the afterlife, outlined in the Divine Comedy and elsewhere, the virtuous pagan who was born prior was the revelation of Christ is consigned to Limbo for all eternity. (Limbo was also said to be the permanent home of unbaptised babies. Though adjacent to hell, Limbo was believed to be a reasonably pleasant place, albeit somewhat downscaled from the eternal bliss of heaven. I don't believe that Limbo was ever the official doctrine of the Roman Catholic Church. Its curiously stilted and bureaucratic logic suggests the crude literalization of a myth; its undeniably resemblance to life here on earth suggests that our universe may itself be a crudely literalized myth.) In many respects, successive epochs have consigned the polymaths of the Christian era to a Limbo of ignorance. Being born prior the advent of the Scientific Age, it is their ill-fortune never to understand the true nature of the physical universe. 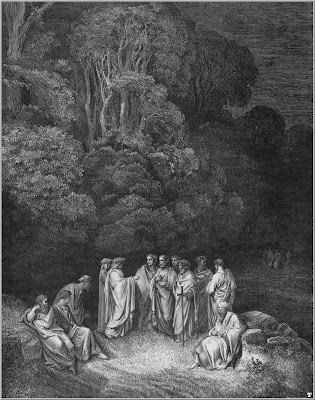 This, however, restates the question raised by never discovering that the painting is a forgery. Were the universes of Newton, of Einstein, and of Heisenberg, present in the universes of Homer and Augustine, waiting for a sufficient ingenuity to be discovered? Or, from the perspective of those temporal coordinates, bounded by the mortality of those who lived within them, are the later discoveries so abstract as to be almost meaningless? Is something true in a particular era, even though it never registered within the conceptual framework of the majority of men who lived in that era? Once again, we are returned to the significance of consensus categories and symbolic systems in the crystallisation of truth, and to Henry James' assertion that “truth happens to an idea, it becomes true, is made true by events.”

More Sophism will be added to this in the next Post, until, by an Affect of Steady Accumulation, a Point Almost Credible will Emerge, alluding to the Essential Pliancy of Reality, and its Particular Vulnerability to the Occultic Works of Hoaxers and Other Magicians.

Posted by Tristan Eldritch at 3:18 PM