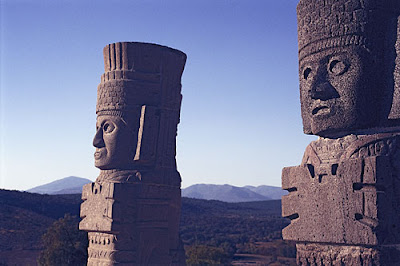 It was the great intuition of Carl Jung, and all who have followed in his mighty footsteps, that nothing is accidental, and this world is a great and wondrously intricate alchemical text, which communicates via the language of mythic archetype and symbol, and wants only for patient exegesis. Where the scientific man sees only coincidence, projection, and pareidolia, Jung and his disciples saw synchronicity - a subterranean design woven into the fabric of everything, a strange feedback loop between psyche and cosmos which infuses events, both large and small, with meaning, however obscure. The Jungian sensibility has flourished on the internet, producing a vibrant subculture called synchromysticism. Where the scientific man sleeps in a cosy reverie of eighteenth century enlightenment, an ossified Newtonian museum of billiard table metaphysics, the synchromystic is uniquely attuned to the modern sensibility – he understands that the vantage from which man views his environment has shifted utterly. In the past, it was perfectly feasible to regard the world as a mightily befuddling, al-be-it ultimately knowable entity, and to regard knowledge itself as a kind of field wherein men sowed the wheat of true facts, and threw away the chaff of misleading assumption. 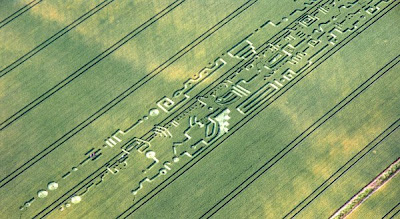 Throwing aside these quaint historical fallacies, synchromystics are the pioneering theorists of a new polymorphous reality – a world in which the initiate eschews the pursuit of merely provisional truths, and thrills instead to the constant pulsation of the barely possible. This is the era of the depth paranoiac - the deep-sea diver in seas of ontological uncertainty and eldtrich rumour. This is a new sensibility – a Frankenstein patchwork of the underground, the outre, and the fringe, which speaks in a mixture of the patois of science fiction, psychedelics, conspiracism, and b-movie eschatology – the language of the tabloid-gnostic. 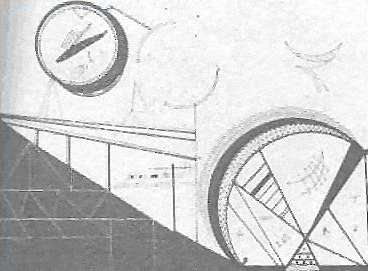 This alien artwork, channeled to the psychic and healer Mavis Burrows in 1982, bears an uncanny resemblance to recent crop circle designs. Well, either that or the cover of an anthology of essays about Esra Pound and the Modernists.

For those of us who till in this rippling, psychoactive field of wild speculation, these are interesting times indeed. In the political sphere, the shadowy global elites continue their brazen controlled demolition of the world economy – an economic system which they themselves had constructed as a house of cards, a suicidal Tilt a Whirl to carry us to the very brink of the abyss. In the midst of this chaos, the foment of new theories and wild ideas continues apace – a massive paradigm earthquake gathering pace beneath our feet. NASA celebrates the fortieth anniversary of man's alleged first walk on the moon - meanwhile a sci-fi movie called Moon goes on general release, directed by the son of the Man who Fell to Earth himself, David Bowie – meanwhile the whole world becomes utterly mesmerised by the death of another androgynous/alien-like popstar – the moon walker.......To where to all these scattered clues and inferences tend? They point to a convergence, an unravelling that must surely be December 21, 2012 - the incalculable event whose ripple effects run backwards along the timeline, simultaneously announcing and immanentizing the eschaton. Those ripples spoke to the ancient Maya in their moonlight Cyclopean temples, and they recorded its distant immanence both in their mythologies, and in the aeon-spanning calender which was the grand summa of their culture. Those ripples spoke again to the ancient Egyptian stargazer, who, armed with the technological and astrological remnants of much older Atlantean societies, built vast, runic monuments which are at once mausoleum, observatory, and prophesy. Yet again, in the Amazonian village of La Chorrera in 1971, the cosmo-millennial ripple reasserted itself, speaking via microbial interface to the nasal-voiced visionary poet Terence McKenna, giving him the conceptual tools to envision 2012 as the Strange Attractor at the End of Time.

Of all those scattered cosmic innuendos, these palpable outward effects of the 2012 ripple, none is perhaps as crucial, yet elusive, as the mysterious glyphs which have appeared annually in the corn fields of southern England since the late seventies. About these eerie formations, there is little consensus, but three primary interpretative perspectives. To the aesthetically minded sceptic, crop circles are an exuberant new guerilla artform, whose secretive nocturnal execution, anonymity, and mystical controversy restore a charge of excitement long lost to the academic sphere of the gallery. To the punitive sceptic, who guards his mundane reality like an embittered cuckold, crop circles are yet another outrageous outer limit to the credulity of the New Age mystery monger. Finally, to hardcore believers such as Michael Glickman, crop circles are a cosmic imaginal Morse code – a series of messages designed, like a lengthy university course, to gradually educate and expand the minds of those who attune themselves to the language of the speaker. Readers should note a fourth possibility – that they are all these things, and constitute yet another passport into the schizoid realm of the excluded middle, the quantum country of paradox from whence we abstract this solid, negotiable world of the everyday.
To be Continued in Part 2: The Devil's Handwriting. 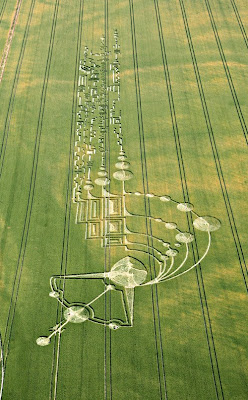 You Have Lost The Game said...

J.G. Ballard wrote a short story called the Voices of Time. Whilst in search of pornography hidden in the pages of science fiction anthologies I happened upon it one rainy afternoon. I found the story disappointing on several levels. Now, years later, I realise Ballard's brilliance.