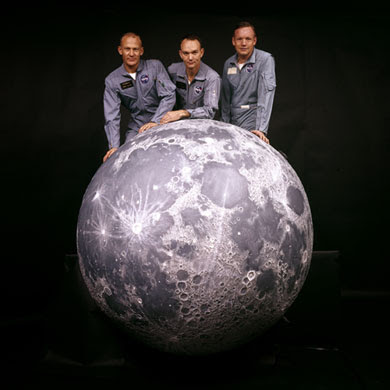 The Mission that Never Got Off the Ground.
Tag Line for Capricorn One (1978).

Having let the Moon Hoax cat of the bag, I'm going to run with it for one more post. The Apollo 11 landing in 1969 represented on the one hand a palpable expression of something new and quintessentially of the 20th century, and on the other perhaps the last triumphant gasp of something far older. The new thing, beyond the technologies involved in the mission itself, was the manner in which it was experienced as a global media event. By holding the entire developed world a captive audience to a dramatic live spectacle, NASA had instigated a massive groundswell in in the realization of McLuhan's global village, and a tentative first step towards the constant mediation of experience characteristic of the modern period. The older thing was most evident in the planting of the flag. If everything else about the moon landing was futuristic and new, that gesture alone evoked the spirit of exploration and conquest which had essentially lead to the eerily rippled flag planted on the moon. Everywhere on earth had been discovered and mapped, and space was the natural next frontier to extend the human longing for adventure, danger, and fresh horizons. 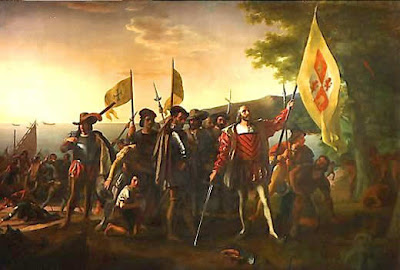 So the Apollo 11 landing was the beginning of one era, and the end of another. And it really was the end; in a fascinating recent piece on NASA by Tom Wolfe, the Right Stuff author asserts “the American space programme, the greatest, grandest, most Promethean – O.K. if I add godlike? - quest in the history of the world, died in its infancy on 10:56 p.m. New York time, on July 20, 1969, the moment the foot of Apollo 11 commander Armstrong touched the surface of the moon.” The gist of Wolfe's piece is that the political will behind the space programme was mired in the mentality of Cold War one-upmanship and nationalistic prestige, and once those very terrestrial /territorial goals had been attained, its interest drifted elsewhere. The funding dried up, and the 20th century's Magellan adventure ended essentially where it should have begun.

There are many ironies here. The global village was the natural consequence of the spirit of exploration here on earth, and its ineluctable end and limit. The moon landing was a globalised event, a giant step for mankind, and yet the flag was a reminder that our space exploration, like that of the oceans and the earth, was a heroic thing that was compromised by grim ulterior motivations – an expansion of our perspective which walked in tandem with the narrow, territorial focus of our minds. As Arthur Koestler put it: “Prometheus reaches out for the stars with an insane grin on his face and a totem symbol in his hand.”

The lunar landing was dogged by conspiracy theories pretty much from the get-go. I'd like to offer a few thoughts on the virulence of this meme. To the post-Watergate world, and more explicitly to the paranoid consciousness of our postmodern period, the AHT (Apollo Hoax theory), like any truly effective myth-cycle, actualises certain core assumptions in how the myth-bearing community views the world. Principal among these assumptions would be They're lying to us! Secondly, the AHT expresses a sense many of us have acquired about the media itself: that it stages events, that it operates under various agendas, including those of propaganda, distraction, indoctrination, and so on. Suspicions about the veracity of the moon landing, like the staged WWF wrestling bouts of the eighties, are an interesting precursor to the general fog of ambiguity that hangs over the modern mediascape. There is a gnostic or Platonic character to the contemporary paranoid consciousness; we envision the media both as a component of, and an ideal metaphor for, a world which appears rigged by unseen forces, and essentially illusionary. The cave is a studio set, and seeing beyond its shadows, escaping the demiurgic prison, is a question of breaking the fourth wall.

On the other hand, the AHT may tell us something about how myths are made in an age where nearly perfect film records are kept of events. Myth-making began within a strictly oral context, and flourished, for obvious reasons, in direct ratio to the sketchiness of historical record-keeping. With this in mind, the existence in the modern period of photographic and film cameras should represent the pinnacle of historical accuracy, and the end of the blank spaces in the record which myths have traditionally exploited. However, we find instead that myth-making adopted a new strategy – it began to exploit the ambiguity, the inherent imperfections, contained in even our most accurate recording mediums. It found its thread to unravel official histories in the blurry spaces, shadows, artefacts, and anomalies of film stock which were now available to be watched and re-watched ad infinitum. This obsessive poring over, and continued exegesis, of newsreel is a common characteristic of the Kennedy, Apollo 11, and 9 11 conspiracy movements, as well as of UFO and planetary anomaly theorists.

Then again, it may have something to do with the character of the footage itself. The lunar landing photos and film footage are absolutely wonderful. They are as ingrained in our collective psyche as the Madonna and the Crucifixion were to the iconographic imagination of previous epochs. They haunted me as a boy, and to this day have the capacity to re-ignite the increasingly unlikely ambition of walking on the moon. And yet there is something, owing perhaps innocently enough to the nature of the moon itself, that renders these images theatrical and staged looking.
The faking of the entire process of the moon landing would have been an extraordinarily complex and difficult thing to achieve; almost as difficult, many have argued, as actually getting to the moon for real. But creating the actual lunar footage itself possessed certain advantages for the would-be hoaxer. There was, for example, a minimum of props necessary to create and maintain the illusion: a couple of astronauts, who are masked like Greek tragedians, the lunar module, a few instruments, and the flag. The lunar landscape itself is so remarkably sparse and minimal as to be a set or stage designer's dream: a completely black sky, a arid landscape of uniform colour and consistency, and a steady horizon line which allows for numerous tricks of perspective. ( Even the sunlight on the moon is redolent of theatrical lighting; astronaut Peter Conrad said “The sun's bright, it's like somebody's shinning a spotlight on your hands! I tell you.....it really is! It's like somebody's got a super bright spotlight!”) In summary, the Apollo lunar footage epitomises in every regard the minimum amount of props and visual cues necessary to create a theatrical illusion, like Waiting for Godot in zero gravity: 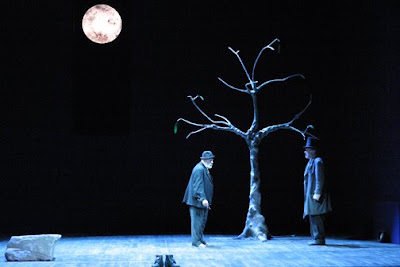 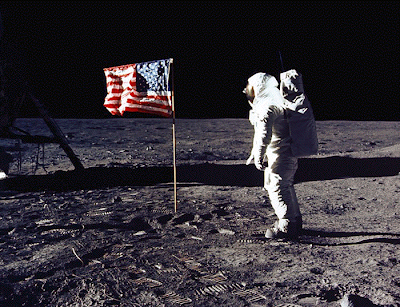 Posted by Tristan Eldritch at 9:07 AM