Religion Was Being Born/Down in Monterey: DA Pennebaker's Monterey Pop (1968) 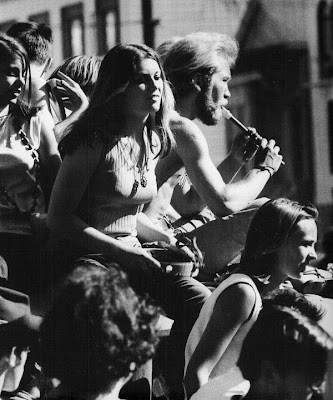 The Monterey International Pop Music Festival of June 1967 has been somewhat eclipsed in the collective memory banks by the other big rock festivals of that decade: the "biblical, epical" scene of Woodstock so thoroughly documented in Michael Wadleigh's brilliant movie of the same name, the apocalyptically grim vibes and tragedy of the Altamont Free Concert, and so on.  But Monterey was the precursor of all the big rock festivals, a truly seminal event that captured the countercultural wave in it's first full, giddy ascent.  Monterey introduced Jimi Hendrix, the Who, Ravi Shankar, Laura Nyro, and Janis Joplin to a wider US audience for the first time.  Hendrix' set famously culminated in the destruction of his guitar by fire, in a performance at first blatantly sexualized and then solemnly religious; Columbia Records immediately signed Janis Joplin on the basis of her performance with Big Brother and the Holding Company.  At the behest of George Harrison, Ravi Shankar played before a western audience for the first time, and Hugh Masekela and Otis Redding also got to do their thing before a larger, whiter crowd than ever before.  Woodstock was on a much larger and more confrontational scale, but for many, Monterey easily trumps its iconic bigger brother in terms of music and performance. 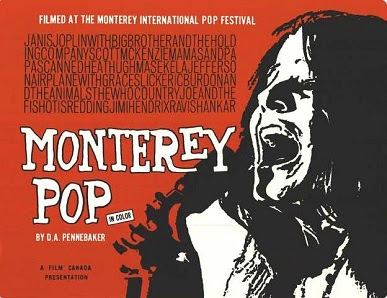 A movie of the Monterey festival was shot by verite wizard DA Pennebaker.  Pennebaker had already impressed Jean-Luc Godard with his documentary of the 1960 Wisconsin Primary between John F Kennedy and Hubert Humphrey, and created an intimate and surreal portrait of Bob Dylan in the maelstrom of his growing fame and lionization in Dont Look Back.  Pennebaker described his approach towards filmaking as "records of moments", "half soap operas", and "semi-musical reality things".   It hardly needs to be said that Pennebaker could shot the shit out of a concert, and that's exactly what he did here.  I recently discovered a full upload of Monterey Pop on youtube, and was knocked out by almost all the performances.  I'm going to link to the film on youtube below, but as a teaser, here's Eric Burdon and the Animals' propulsive and catchy celebration of the event in song:

You can watch Monterey Pop on youtube here.  Get it while it's hot - it mightn't be there forever.

Posted by Tristan Eldritch at 3:59 PM