The Hourglass of Aeons (Part 2) 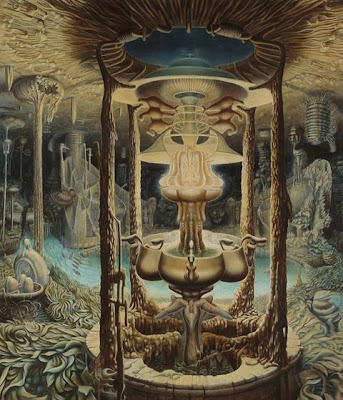 
The precise origins of the Hourglass are lost in the shifting sand of many pasts, as are the beginning of all things in the Dying Aeon.  There is, however, a story which is told by certain reptilian tribes regarding the creation of the world, which goes as follows –

In the beginning, there was only the great snake Abdu, resting in his endless coils.

And many aeons of our time passed Abdu in this happy state, until there came a time when his eyes started to pulse less, and grow dimmer all the time, and Abdu knew that he had grown tired of knowing all things, and that his eyes would soon dim out altogether, and then there would be nothing, for Abdu would be asleep, and there could be nothing ever to wake him again.  And then a momentous thing happened, which none of the Hierarchs or theologians have ever understood, though they have discussed it long into the night, and tramped their feet bitterly into the sand.  Abdu resolved that instead of knowing everything, he wanted to know one thing from another.  Alas, being all things, he did not know how he might differentiate one thing from any other, but as his thoughts on this question remained unresolved, they hardened and congealed into round orbs that fell about his coils in great clusters.  And since Abdu did not cease thinking on the problem of knowing one thing from another, those orbs grew limbs which allowed them to move about and work upon the problem which Abdu had set them.  And Abdu became quiescent then, and as the deathless one drifted into abeyance, his sleepy thoughts formed a kind of fine vermilion dust that drifted through the air around his coils.

And the orbs began to gather all the vermilion dust that drifted in the air about them, and pile it into great heaps on the scales of Abdu.  But how can we differentiate one grain of this sand from another they wondered, for it is all the one thing?  After much disputation, the orbs resolved that though the individual grains could not be differentiated, it might be that if sand were moved from one place to another, then the sand in the first place would be one thing and the sand in the second another.  Hence, they set their ingenuity to constructing a device which might keep the sand in constant or near-constant motion.  They created a vast glass structure composed of an upper and a lower bulb, connected to one another by a narrow central funnel, and they filled the lower bulb with the sand of Abdu’s restful thoughts.  About the bulbs they erected a container like to the grandest temple ever raised by mankind to honour his gods: the glass was enclosed by cyclopean foundations and pillars, adorned with hieroglyphics that none but Abdu would ever understand; and the whole structure was connected to a machinery of levers and pulleys which allowed the hourglass to be turned and the slow falling of its vermillion sands initiated.

And when the sand started to fall, Abdu’s eyes gleamed once again, and the Hierarchs and theologians of those tribes tell us that ever since that moment, Abdu has lain contentedly in his coils, watching the sand as it falls slowly through the great celestial machinery which they call the Hourglass of Aeons.  And they tell us that the stars in the heavens are but grains of sand in this Hourglass, for all time and space as we know it are contained in the disordered thoughts of Abdu as they fall from the higher bulb down to lower; and when every last grain has finally come to rest in the bottom bulb, our world and everything we have ever known will come to an end, and then the orbs will rouse themselves to turn once more the great machinery, and the elements of the last world will once again be intermixed and set in falling motion, and many people will remember having lived other lives prior to this one, and remember the character of other worlds contrary to this one, some better and some worse, and those people will remember aright, for many times has the Hourglass of Aeons been turned, and many contrary worlds has it created, all composed of the same core elements, and the visions men see in this world, and the exotic artworks which they create, are but memories of the previous admixture of sand which fell through the Hourglass, or an adumbration of the next, and no one knows how many times the Hourglass of Aeons has been turned, none save Abdu, happy resting in his endless coils.

This antique tale provided the mythic prototype for the talisman which had found its way into Ah Pook-Nar.  It had been fashioned long ago by reptilian craftsmen as a miniature model of the celestial hourglass celebrated in their ancestral legendry.  The sand in the hourglass was deemed to be the key to its peculiar narcotic effects.  This sand, Kadmon had heard, was a bright shade of vermilion red which shimmered and sparkled with a lustre unlike that of any naturally occurring mineral.  Some avow that its origins were meteoritic; others claim that a mystic once awoke from a profound trance to find himself clutching two fistfuls of the mysterious sand, like a keepsake preserved from a fading dream.  Whatever its origin, gazing at the sand as it fell through the hourglass had a peculiarly mesmeric affect: the gazer lost all consciousness of time, and became wholly absorbed in vivid hallucinations and fantasies.  Having existed for centuries in the open desert, the lizard people’s perception of time differed radically from that of city dwelling humans; knowing only the great, brooding silence and essential homogeneity of that terrain, their sense of time had gradually become less insistent, and more mystical and undifferentiated in character.  Hence, the effects of the hourglass were less pronounced on them, and they used it as a kind of oracle.  In the district of Malrudia, upon the roof of whose ziggurat men have strenuously cultivated gardens and pasture land, the priests slaughter lambs and oxen and profess to divine the course of future events in such patterns as the poor beast’s ruptured entrails assume; peasants in Kadmon’s home in the north-east cast straws to point them to enigmatical verses which were said to be the mathematical equations by which some elder demiurge composed the fortunes of men; even worldly migrants practised a form of random divination whereby they accepted the next sight or happenstance the city presented to them as an oracular cypher, thus making of the whole city a sacrificial beast whose ruptured gut was a disordered dream of things yet to come.  In such a fashion, the old reptilian priests and chieftains consulted the hourglass of aeons, until at some point its reveries lead them astray, and their tribes were dispersed and the hourglass itself lost in the sand with all the other fragments of untold aeons. 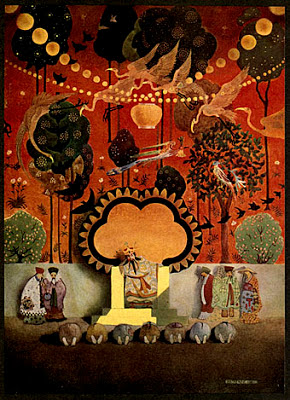 Eventually, the hourglass was discovered by a group of Diggers, and found its way into Ah Pook-Nar, where it quickly acquired a notoriety for leading wealthy aesthetes into lives of opiated dissipation and hermetic squalor, and yet the more lives it destroyed, the greater grew the mystique surrounding its visionary potency.  A group of gossiping thieves told Kadmon that the hourglass had fallen into the hands of an obscure wizard, and in its prolonged absence from the open market, it had become an object obsessively coveted by certain collectors, aesthetes, and hedonistic adventurers.  Some even avowed that the Autarch himself desperately wanted to add the hourglass to the library of inexplicable technologies and ancient totems which he and his processors had patiently accumulated over the centuries, as though in the hope that all would one day be found to be parts of a single and all-powerful divine contraption which might ensure the perpetuity of their reign beyond the eventual death of the New Sun.

Posted by Tristan Eldritch at 7:40 PM