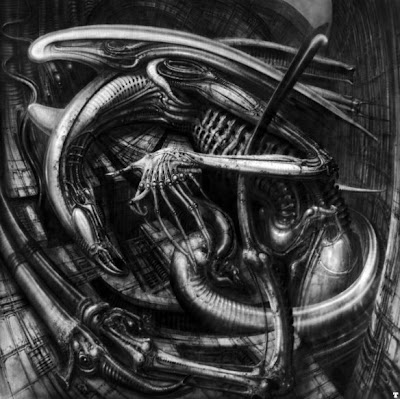 Part 1: The Return of the Space Jockey.

One popular narrative of Hollywood history holds that the 70s were a Golden Era of mature drama and European-influenced experimentation – and that this state of affairs might still pertain to this day – had not Spielberg and Lucas seduced and infantilized the world’s cinematic taste-buds with the invention of the summer blockbuster. There is undoubtedly a certain amount of truth to this assertion, but it fails to acknowledge that the early fruits of Hollywood’s shift towards genre escapism were often beautifully crafted and executed. If the main thrust of the decade was towards high-brow, ambitious adult filmmaking, then the latter part of the 70s and early 80s witnessed a small renaissance of expertly-crafted studio b-pictures. Spielberg’s Jaws started the trend in 1974, of course, and in Close Encounters of the Third Kind the same director turned a staple of the 40s/50s b-movie landscape into a masterpiece of technique and form; a sentimental but ravishing sensory experience that stands as a kind of Sistine Chapel to the enduring folk-religion of the flying saucer. Also during this period, John Carpenter brought an almost Hitchcockian mastery of form to pulp materials in a trio of classics – Halloween, The Fog, and The Thing – and Ridley Scott produced Alien, a horror/sci-fi hybrid which was only green-lit in the wake of Star Wars making virtually anything related to outer space a hot commercial property. (Even Bond took his drolleries into orbit. Doubtless the Shaft franchise would have followed suit, had it not run of steam earlier in the decade.)

The black and twinkling whites of ersatz-space, however, was about all Alien had in common with Star Wars. If cinematic visions of outer space traditionally tended either towards futuristic utopianism, or the kind of technologized medievalism of Star Wars, Scott and writer Dan O’Bannon’s foray into the stars reflected a far more recognizable, everyday world of harried blue-collar workers and nefarious, ethically bankrupt corporate interests. Alien is, on the one hand, a ruthlessly efficient genre picture that is as lean, economical, and unforgiving as the title (both a noun and adjective) suggests. It follows the structure of a slasher movie, albeit with a victim-pool of largely middle-aged character actors who are more concerned with their immanent paychecks than any hormonal tomfoolery. Alien also follows the slasher convention, out of which the recent Cabin in the Woods derived much mileage, whereby the characters aid fate and narrative necessity by doing somewhat imprudent and even foolish things in an unfamiliar environment. The worst offender is John Hurt, whose cavalier attitude towards sinister looking alien eggs renders one marginally less sympathetic to the ensuing facial and intestinal discomforts.

Alien, then, is a pure, even primal cinematic narrative of struggle for survival in an enclosed space, containing at least two or three of the greatest shock and squirm moments in the history of screen horror. (Thirty years on, only the most jaded nervous system could sit it through without some kind of visceral start.) Alien may also, however, make some tentative claims towards a kind of thematic seriousness. In a previous post on cosmic horror, I argued that science fiction and horror of the cosmic variety often served the function of articulating the sense of upheaval and anxiety engendered by the increasing maturity of the physical sciences. Perhaps most unsettling of these developments, with regard to what it means to be human, lay in the theory of evolution, and in the increasing dominance of the mechanical, rather than the organic, as a prism through which to view nature and biology. The Darwinian idea of survival of the fittest implied a kind of stark, unsentimental vision of nature, whereby all human values are ultimately subsumed under the brute necessity to survive and replicate in an environment of limited resources. Our nature is shaped and defined by nothing loftier or more ethically flattering than the struggle to subsist and reproduce; this is the vision of nature of which Tennyson’s famous verse from In Memorandum has become emblematic:

Who trusted God was love indeed,

Tho’ Nature, red in tooth and claw

With ravine, shriek’d against his creed.

One crucial element of the scientific revolution was the degree to which one metaphor of the world, that of the living, vitalized, and unpredictable organism, was gradually eclipsed by another: that of the regular, rule-bound, inanimate machine. The idea of biological organisms as being akin to machines or technologies goes back as far as Plato and the earliest expression of the design argument; however, in the modern world, where mechanised technology replaced farming and agriculture as the primary mode of production, the metaphor of the mechanical gained a greater impetuous, and continues to influence our view of the world today. Scientific and avowedly materialistic thinking tend to narrow the gap between the living and the inorganic, and we are left with an anxiety that once all the vitalist ghosts have been exorcised, there is nothing left but the machine, vainly dreaming its own autonomous selfhood in the sinews and circuits of an automaton. 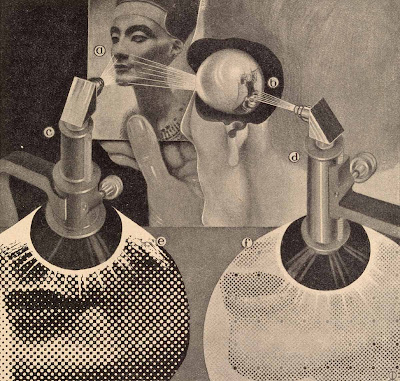 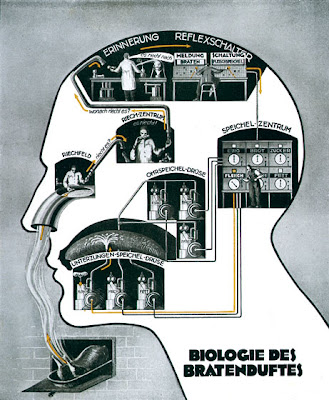 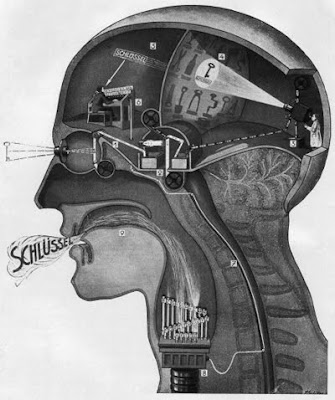 These emerging anxieties about what it means to be human were crucial to the development of science fiction. The very first alien invasion imagined by our culture – H.G. Wells’ War of the Worlds – was a pure product of the shock of evolution, and the cold, implacable logic of its narrative is essentially that of the grimly deterministic struggle for survival without ancillary values of any kind. In the end, the Martians are not defeated by human ingenuity or heroism, but rather by a mere accident of the invaders lack of immunity to certain terrestrial bacteria. Throughout its history, science fiction has continued to explore our anxieties regarding the ever-shifting line of demarcation between the living and the mechanical, through the invention of a plethora of human-like robots and androids. Kubrick’s 2001 and Ridley Scott’s Blade Runner are often said to depict worlds in which the machines have become more human, and the humans more mechanical and affectless; in a sense, the machines seem to erupt with the vitality that we lost in order to understand and build them.

These ideas feed very directly into Alien – it is a film that can be said to be suffused with a sense of anxiety about what it means to be human. Like the War of the Worlds before it, Alien is a pure product of the shock of the logic of evolution to human values. The ship’s android Ash – whose malfunction and “death” is as disturbing as any scenes involving the alien – admires the xenomorph precisely it is a perfectly calibrated survival machine – it actualizes the cold logic of evolution without the encumbrance of compassion or values of any kind. Throughout Alien, the imagery evokes a sense of anxiety, even of disgust, with the physical processes by which living organisms replicate themselves – Kane’s death positing gestation and birth as kind of rape, followed by the invasion of a foreign, inimical parasite. Alien takes our anxieties regarding our physical bodies and corporeal nature, and externalizes them in an extreme form as the alien threat – the fantastic being always an externalization of an unconscious fear or longing, and the aliens being always ourselves, or some aspect of ourselves. Alien’s ability to comb these murky, subterranean anxieties about biology and human identity was thrown into overdrive by the design sensibility of the great Swiss surrealist H.R. Giger, whose cold, repulsive/ beautiful illustrations of interlocking biomechanical hybrids are a brilliant expression of our attraction/repulsion to our own physical bodies, and to the idea of those bodies as coolly efficient machines: 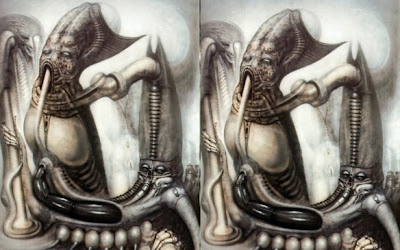 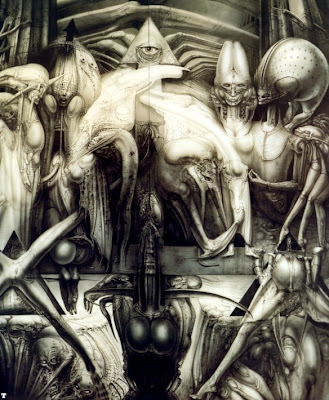 Giger’s alien became instantly iconic and recognisable, but a much smaller element of the movie’s mise en scene would also inspire a great deal of fascination and cult notoriety over the years – the mysterious remains of the ship’s long dead pilot which became known on the set as the “space jockey”: 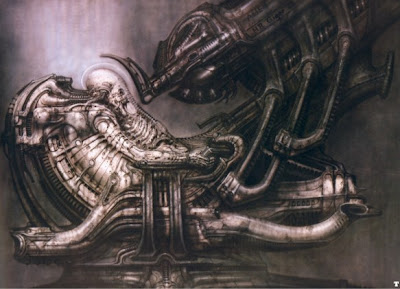 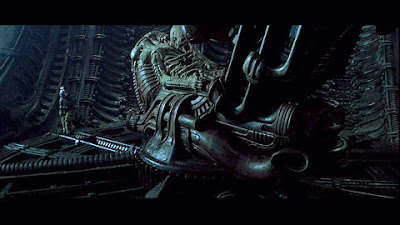 Giant in stature, humanoid in general appearance albeit with facial features redolent of an elephant, seated at the controls of what, in typical Giger-style, might aptly be labelled a cockpit – the Space Jockey was an eerie, evocative image, like a recasting of Ganesha as a fossilized Lovecraftian astronaut/deity. We find a direct precursor to the Space Jockey, and to a great deal of Alien’s plot, in Mario Bava’s wonderful 1964 zero budget sci-horror Planet of the Vampires.

In Vampires, two star ships are drawn by a distress signal to an unexplored planet called Aura. After crash-landing on the surface of the planet, some of the crew members discover an abandoned space-craft remarkably like that of the Alien craft, and inside it the skeletal remains of its giant humanoid pilot: 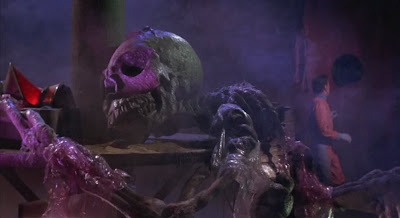 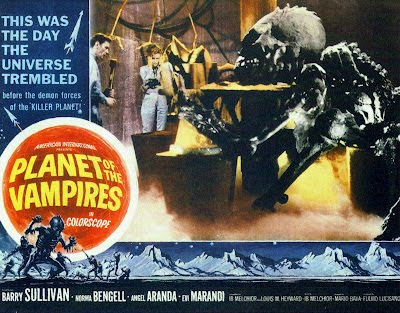 (Interestingly, Scott and O'Bannon claim not to have seen Planet of the Vampires prior to making Alien, which, if true, would suggest a most peculiar spasm of the collective unconscious) The Space Jockey also reminds me a great deal of the most evocative and brilliant moment in all of Robert E. Howard's writing career: Conan's encounter with the "trans-cosmic being" Yag-Kosha at the end of The Tower of the Elephant:

'Oh man, listen' said the strange beast, 'I am foul and monstrous to you, am I not? Nay, do not answer; I know. But you would seem as strange to me, could I see you. There are many worlds besides this earth, and life takes many shapes. I am neither god nor demon, but flesh and blood like yourself, though the substance differ in part, and the form be cast in a different mold.

'I am very old, oh man of the waste-countries; long and long ago I came to this planet with others of my world, from the green planet Yag which circles forever in the outer fringe of this universe... 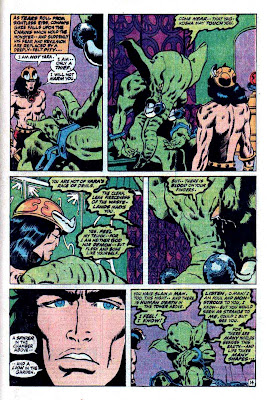 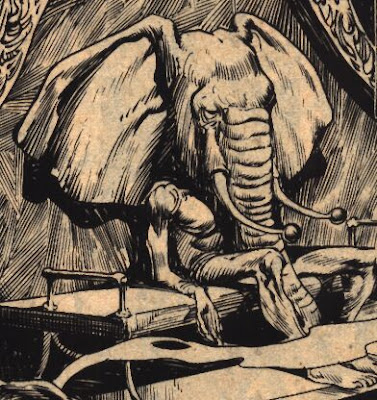 To be continued. (I found the Fritz Kahn illustrations here, and the Giger stuff here.)
Posted by Tristan Eldritch at 5:29 PM