A Preliminary Expedition into the Cavern World. 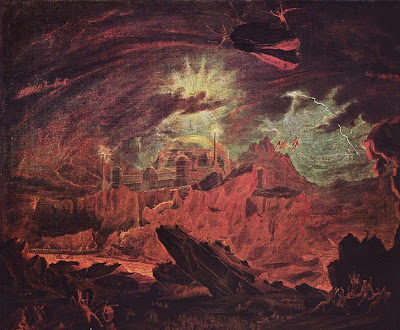 Within the whole corpus of rejected knowledge, there are a handful of ideas that seem to possess a particular virulence. These ideas have exerted an irresistible power over the imagination of generations of fantasists, contrarians, and crackpots. They form a constellation of ideas, often interrelated, which we will label for convenience the Crackpot Unconscious. (Please bear in mind that I don't use this terminology in an entirely derogatory manner. We are referring to the skid row at the wrong side of the tracks of Mr. Jung's collective unconscious, a territory where the trained explorations of the shaman or occultist give way to the visionary dementia of the schizophrenic and the paranoid. It is a common stream, mined by artists, prophets, and conmen alike.)

One of the most resonant notions within the Crackpot Unconscious is that of a Hollow or partially hollowed-out Earth, wherein complex subterranean societies exist coeval with surface-dwelling man. The idea of an underworld, particularly envisioned as a hub of the afterlife, is a deeply ingrained mythic constant. Virtually all the ancient traditions possess some kind of multi-levelled underground complex, usually devoted to the punishment of mortal inequity, and peopled by a subspecies of specialist in the provision of grisly torture. 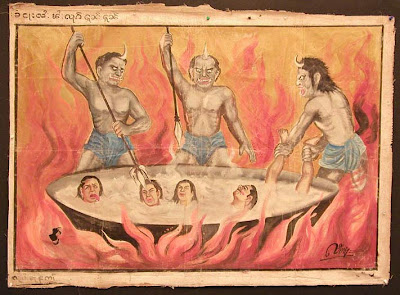 In Chinese folk mythology the underworld is called Diyu, and was said to possess ten courts and eighteen levels of punishment. No sadistic stone is left unturned: there is a Mountain of Knifes, cauldrons where sinners are fried and even steamed, a grinding machine where they are ground into a bloody pulp, eye-gouging, skinning, and the works.

Variations of the underworld and its tormenting spirits are found in every major tradition. The non-canonical Apocalypse of Paul describes the keepers of Tartarus as the tartaruchi, fell spirits armed with an iron of three hooks. (In the 1980's, horror author Clive Barker refitted the tartaruchi in the fashionable garb of the bondage subculture, giving birth to the VHS-era nightmare of the Cenobites.) In the grand world picture of Norse mythology, to which the fantasy genre owes so much of its substance, three of the nine worlds were located underground: Niflheimr, Nidavellir, and Svartalfheim. Here the underworld is not merely a place of torment, but rather a whole confusing ecology of dwarves and elves. In folk beliefs, derivatives and relatives of these creatures, in the form of trolls and faeries, would populate the interior of mountains and the caverns of the underground for long into the modern period. 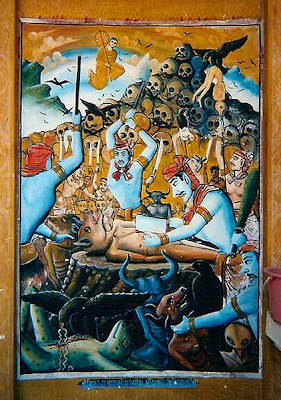 Mythical constants never fully go away; they merely evolve and mutate over time. The Hollow Earth theory started in the realm of scientific speculation, initially proposed by Edmund Halley in 1692. Perhaps because it dovetailed to some degree with the mythical constant of the underworld, it would go on to explode into the deranged stratosphere of alternative belief systems, drawing into its dark bosom most, if not all, of the major players in the Crackpot Unconscious: Atlanteans, Antediluvian Civilisations, Aliens, and even Antarctic Nazis.

The Hollow Earth is one of those rare, lively subjects where a pseudoscience and a subgenre of adventure literature eagerly feed off one another. Adding to the innate sense of adventure surrounding cavern worlds and lost civilisations, it was widely believed that the Hollow Earth had an entrance at both of the Poles. Hence the magnificent isolation of the North Pole has been a locus for both the theory and the fiction. The adventurer and Arctic explorer Jeremiah N. Reynolds gave many lectures on the Hollow Earth theory which apparently influenced Edgar Allen Poe's "Narrative of Arthur Gordon Pym." (In the May 1839 issue of New York's Monthly Knickerbocker Magazine, Reynolds published an article entitled "Mocha Dick: Or The White Whale of the Pacific: A Leaf from a Manuscript Journal." This piece dealt with a notorious "bull whale of prodigious size and strength...white as wool", who had survived over a hundred skirmishes and wreaked countless ships, before it was finally laid low in 1838. The influence of this particular piece of maritime legendry on American letters need hardly be elaborated here.) 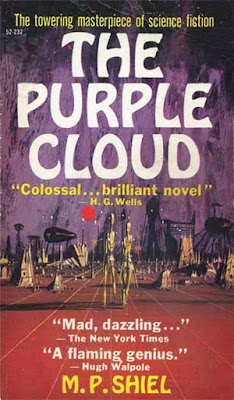 The place of the Antarctic in weird fiction generally is worthy of a study in itself. It is of course the setting for Lovecraft's At the Mountains of Madness, and plays a crucial, baffling role in what is perhaps the strangest novel of all: MP Shiel's The Purple Cloud. (Frank Belknap Long was scarcely overstating the case when he called the Cloud "the most unutterably terrible book ever written.") For our current purposes, it is the Pole that begins to draw some of the wilder strands of the Crackpot Unconscious together. One of the many offshoots of Theosophical lore suggested that the Ascended Masters of the esoteric tradition inhabit a subterranean realm known as Agartha, which also had an entrance in Antarctica, as well as Tibet, Peru, and Mount Shasta in Washington. One of the many occult societies whose interest was piqued by such notions was the notorious Thule Society of Nazi Germany. This has lead to persistent, unconfirmed suggestions that Hitler himself funded a Polar expedition to discover such an entrance, and herein we find the origins of the contemporary myth of a Nazi secret base in the Antarctic.

This beloved chestnut of conspiranoid historians seems to hinge largely on a couple of peculiar statements which have been attributed to Admiral Karl Donitz, the commander of the German submarine fleet who was later surprisingly named by Hitler as his successor. It is alleged that in 1943, Donitz said "Germany’s submarine fleet is proud that it created an unassailable fortress for the Führer on the other end of the world", later alluding during the Nuremberg Trials to "an invisible fortification in the midst of the eternal ice." While the preposterous can certainly sometimes be true, it seems far more likely to assume that the Nazis have merely joined the tartaruchi and their brethren in some chthonic realm of the imagination. They will not want for company, as we shall see.

Posted by Tristan Eldritch at 5:13 AM