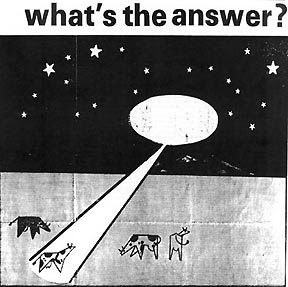 It makes me think of J.M. Barrie’s line in Act IV of Peter Pan: “Do you believe in fairies?......If you believe, clap your hands!”

What is the sound of one hand clapping, I wonder, one small, gray-colored hand with three cartilaginous fingers and no opposable thumb?

Scored by the eerie whirring of a thousand Theremins, flying saucers wobbled out of paranoid Hollywood skies in the early fifties, and have remained a source of cosmic innuendo and kitsch ever since. Writing about H.G. Wells and the development of the scientific romance, the Russian author Yevgeny Zamyatin argued that the “stone, asphalt, iron, petroleum, mechanical country” of the modern world would inevitably produce its own “iron, motorized goblins” and “mechanical, chemical fairytales.” Zamyatin’s assertion implies that our mythological, folkloric archetypes will persist and continue to flourish in the scientific age, al-be-it augmented with suitable upgrades. While the modern world has created many of its own distinct mythic archetypes, only aliens and their ever-elusive aerial crafts have fully attained the power that myth and folk beliefs possessed throughout history: the power to persuade certain people of their literal existence. The kitsch invasion from outer space that staged in the fifties and sixties never made it as far as the Pentagon, but it succeeded in an extraordinarily virulent colonization of the mass imagination which continues to this day. While popular cryptids such as Big Foot and the Lough Ness monster constitute little more than minor twitches of the Jungian optic nerve, the lore of extraterrestrial contact and cover-up forms a persistent and fascinating shadow narrative to post-war history. Throughout its long, murky existence, the UFO belief has produced mass panics, messianic cults, New Age religions, and about as many labyrinthine conspiracy scenarios as all the secret societies put together.

Frequently written off as an inexplicable and anachronistic fad, what Carl Jung labeled the “modern myth of objects seen in the sky” never quite goes away. In 2008, it has once again attained the status of a cultural epidemic: UFO’s are being eagerly tracked by a variety of disparate media enclaves, ranging from Larry King’s CNN studios, to the paranoia-fomenting boards of abovetopsecret.com, to the normally more terrestrial-minded journalistic hotbed of the Sun newspaper. The internet, greatest ally to conspiracy theory since the invention of the secret handshake, has proven equally enabling to the shadow-world of ufology. Once confined to the physical heavens above our heads, UFO’s are now routinely spotted in the digital aerospaces enveloping google earth.

The observance of strange prodigies in the sky is a classic symptom of the apocalyptic imagination. Keith Thompson summarized Jung’s more ominous observations regarding the flying saucer in Angels and Aliens: UFO’s and the Mythic Imagination: “With a certain somberness, Jung noted that he was not pleased to conclude that the appearance of UFO’s clearly indicated “coming events which are in accord with the end of an era.” Such large scale anomalies typically arise when wholesale changes are under way in the balance of forces in the collective unconscious- that vast repository of images and motifs common to the myths and dreams of peoples throughout the world, all connected as a complex matrix transcending time and space. Jung had no doubt that humanity was entering a time of profound transition…”

Whether Jung’s theory of the collective unconscious has any validity or not, and I would personally tend to suspect that it does, it seems that people look to the skies with more alert and quizzical eyes during times of crisis and upheaval. This year has witnessed a marathon harvest of high strangeness in the upper atmosphere, operating on a global scale. In recent weeks, , has experienced its second major explosion of anomalous aerial phenomena, prompting one eye witness to observe: “It was like two rectangular boxes containing flames, and it was like something Biblical. It was right there, not far out in space. This was very up close and personal. That’s what the three of us said to each other: It’s like something out of the Bible. And one of the guys said “Could this be the end of the world?” Britain has also experienced a wave of sightings this year, though how of many of these can be explained away by the recent vogue for Chinese lanterns, coupled with the Sun’s apparently indiscriminate yen for X-Files-type innuendo, remains to be seen. Meanwhile, closer to home, eye-witnesses in county Louth claimed to see a massive triangular craft hovering over a small town, and one apparently nerve-racked pensioner arrived in the offices of the Louth Leader a couple of weeks ago, claiming he’d seen the craft on various occasions, and “feared abduction.”

The longevity of the UFO belief, and the extraordinary complexity and consistency of the mythology which has evolved around it, requires some elucidation beyond a mere blanket skepticism. The flying saucer myth was not initially crystallized by surreal drive-in movies; these were in fact a product of a national phenomenon which had seized the imagination of the American public in 1947. The catalyst was a sighting reported by a pilot named Kenneth Arnold in June of that year. The objects claimed to have witnessed while flying his plane near were crescent-shaped; crucially said they “flew like a saucer would if you skipped it across the water.” It was by virtue of some inspired journalistic alchemy that the great anomaly of the twentieth century, the “mechanical, chemical fairytale” of the scientific age, assumed its iconic form. (Whirring of Theremins: Or was it?)
To be continued.

Posted by Tristan Eldritch at 6:53 PM